I Think "Abject" is the Word

Another cricket day today, off to what turned out to be the very affluent looking village of Oxton, a place I've never visited before despite it being close to Southwell, where I went to school.

The ground was in a promising looking location, high up in the village, and with a flock of curious, constantly baa-ing mixed flock of black, and white, sheep, and with a quirkily charming old pavilion where tea was made by pouring twenty bottles of water into a cauldron kept on the go by a scary gas flame. As is the way with any proper olde worlde sports ground, there must be some broken down equipment on display, and in this case it was a rusting yellow heavy roller that looked like it hadn't moved for a very long time.

Like my feet when I'm batting. More of that later.

Like all cricket grounds I've played at this year, the Oxton ground was a playground for swallows and house martins to swoop around, one swallow in particular passing a metre from my face when I was fielding. Pied wagtails were also plentiful, and there seemed to be a constant piping call, reminiscent of a lapwing or oystercatcher, that I couldn't identify the source of.

A kestrel flew overhead. I found an old bird's nest in an outside toilet. More sheep came up to the fence and "baaa-d" at me. But what struck me the most was a mistle thrush, tall and elegant, visiting the ground during a rain break to grab a worm of two.

For rain it did, hard. Once before the match and twice during it, at which point the drawbacks of a charming old quirky pavilion became very apparent; it seemed to be raining harder in the dressing room than outside. Still it did mean we got to have an early tea, always a highlight for me.

In between showers and the odd crack of thunder - one batsman decided his helmet was a bad idea as the lightning got closer - we actually knocked over the Oxton batsman for a mere 44 on a day were the catches stuck and the wicket proved rather a tricky one.

At 20-1 in our reply, hopes were high. Unfortunately the local giant fast bowler had other ideas, and after our skipper fell first ball to the spinner at the other end, he destroyed us with extreme prejudice.

He was simply miles too fast and straight.

I went in at number 8, survived the first ball by some miracle, and then sightless in my helmet and the poor conditions, aimed a panic stricken drive at my second ball and had a lot of my stumps knocked over. Sounded like it anyway, I was too despondent to look.

He took 7-10, and we went down for 25, the lowest score I've ever been involved in. No-one knew what was going on at all, and our spirits sank before we began to smile at ourselves again as the familiar collapse went on. Yet yet bloody yet again.

At least I got to wear my new spikes, they looked good even though they had half the ground attached to them by the end. And my helmet is currently costing £15 per ball I face.

All text and images copyright CreamCrackeredNature 25.06.16 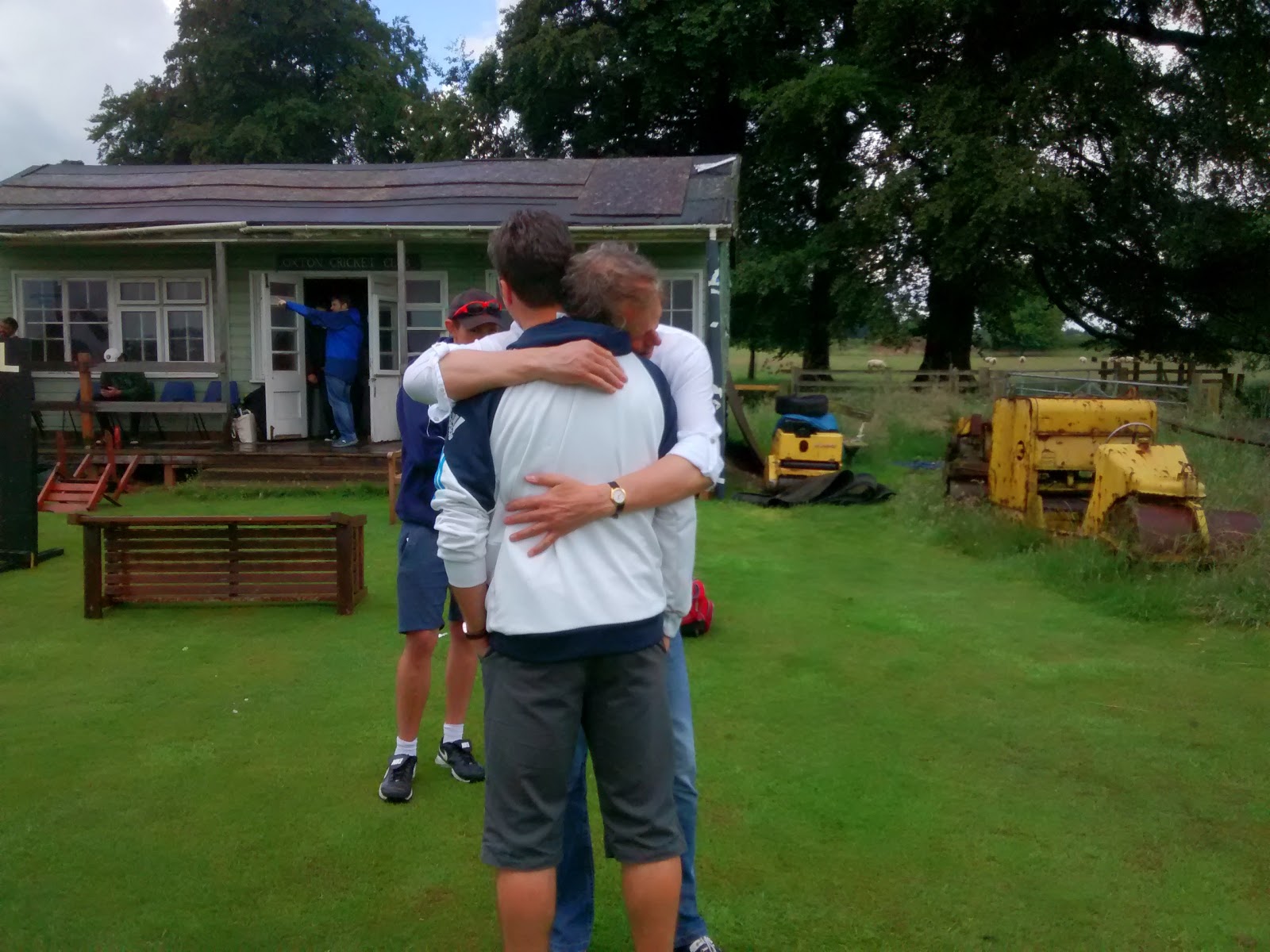 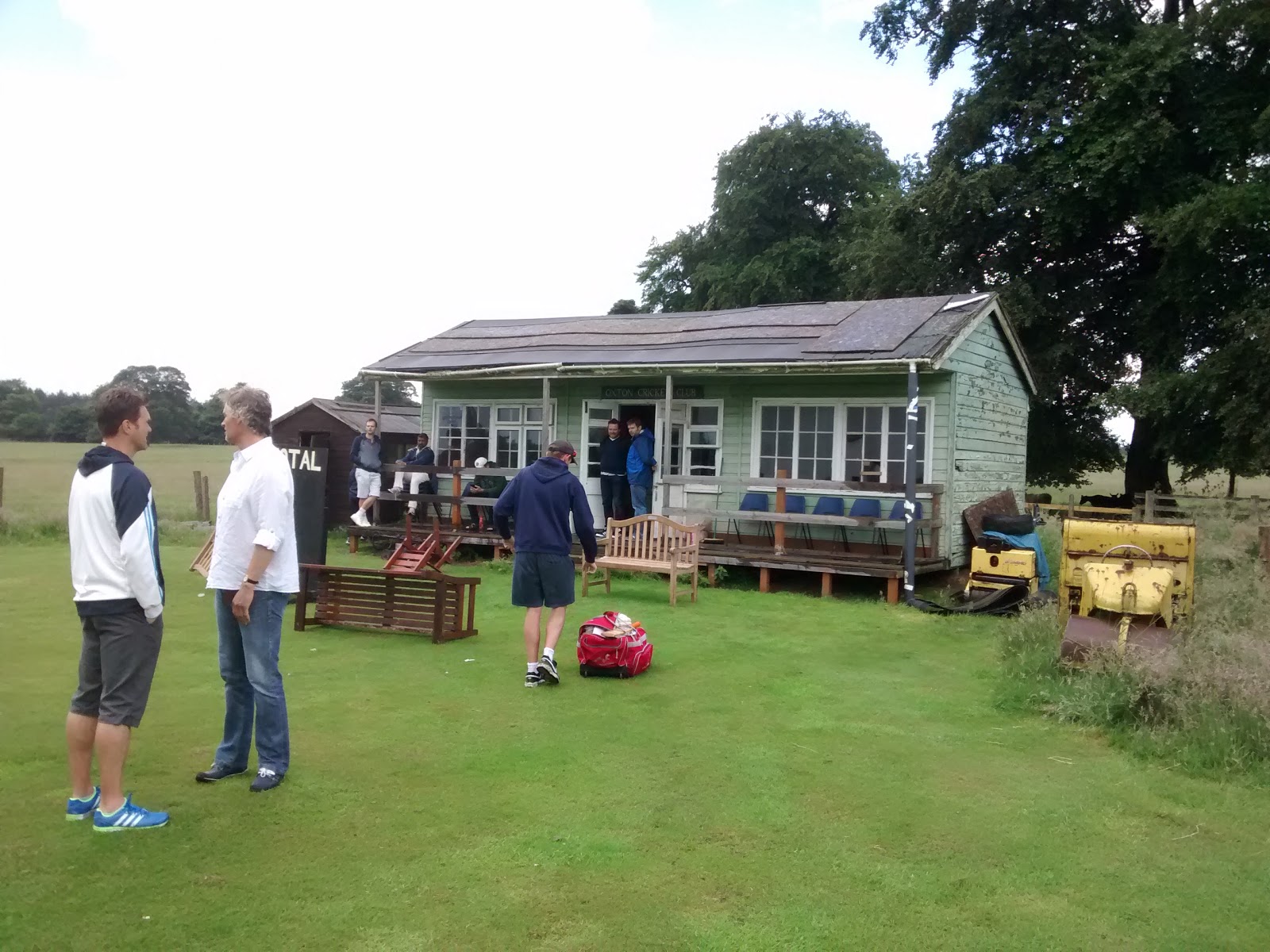 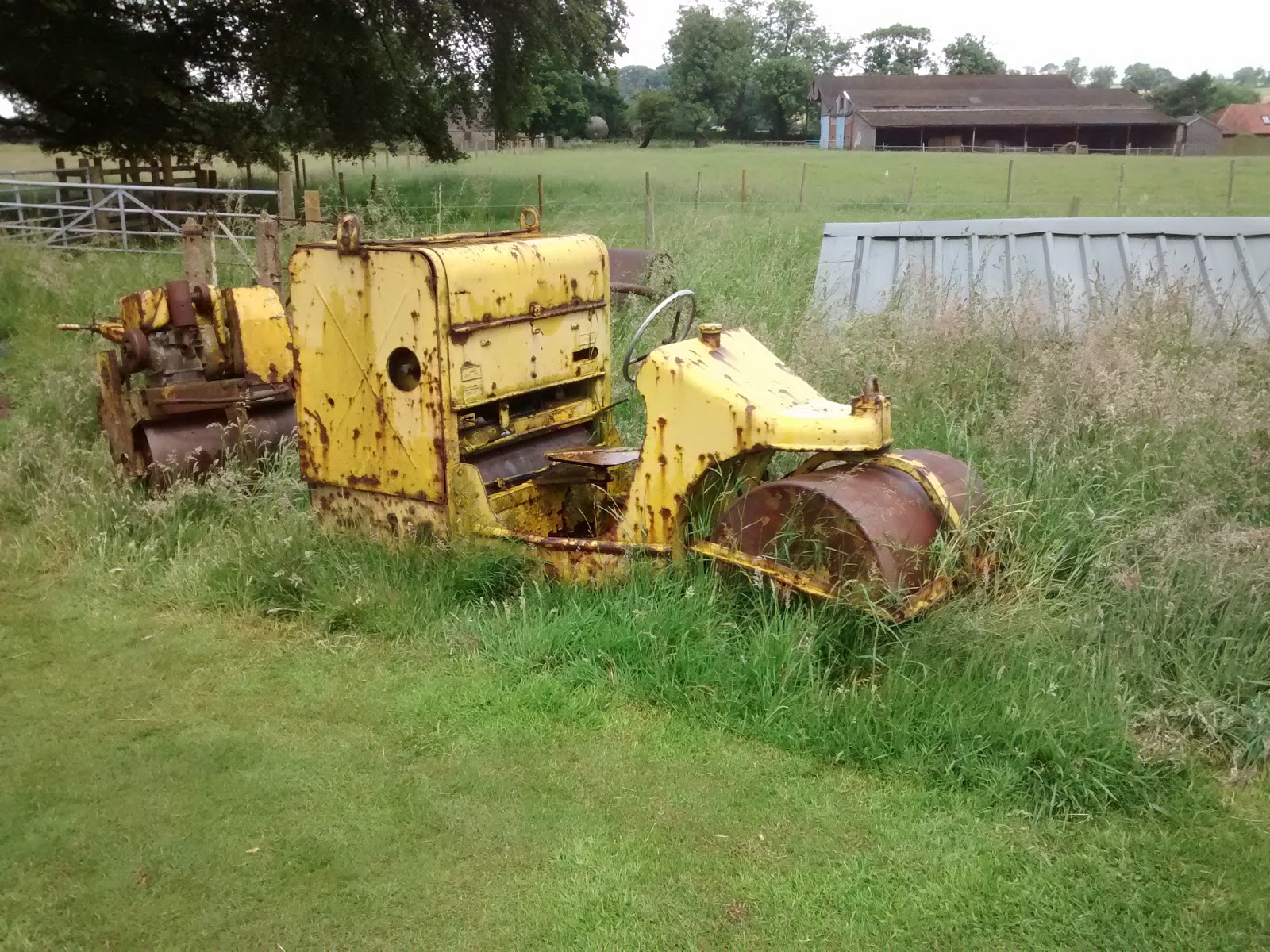 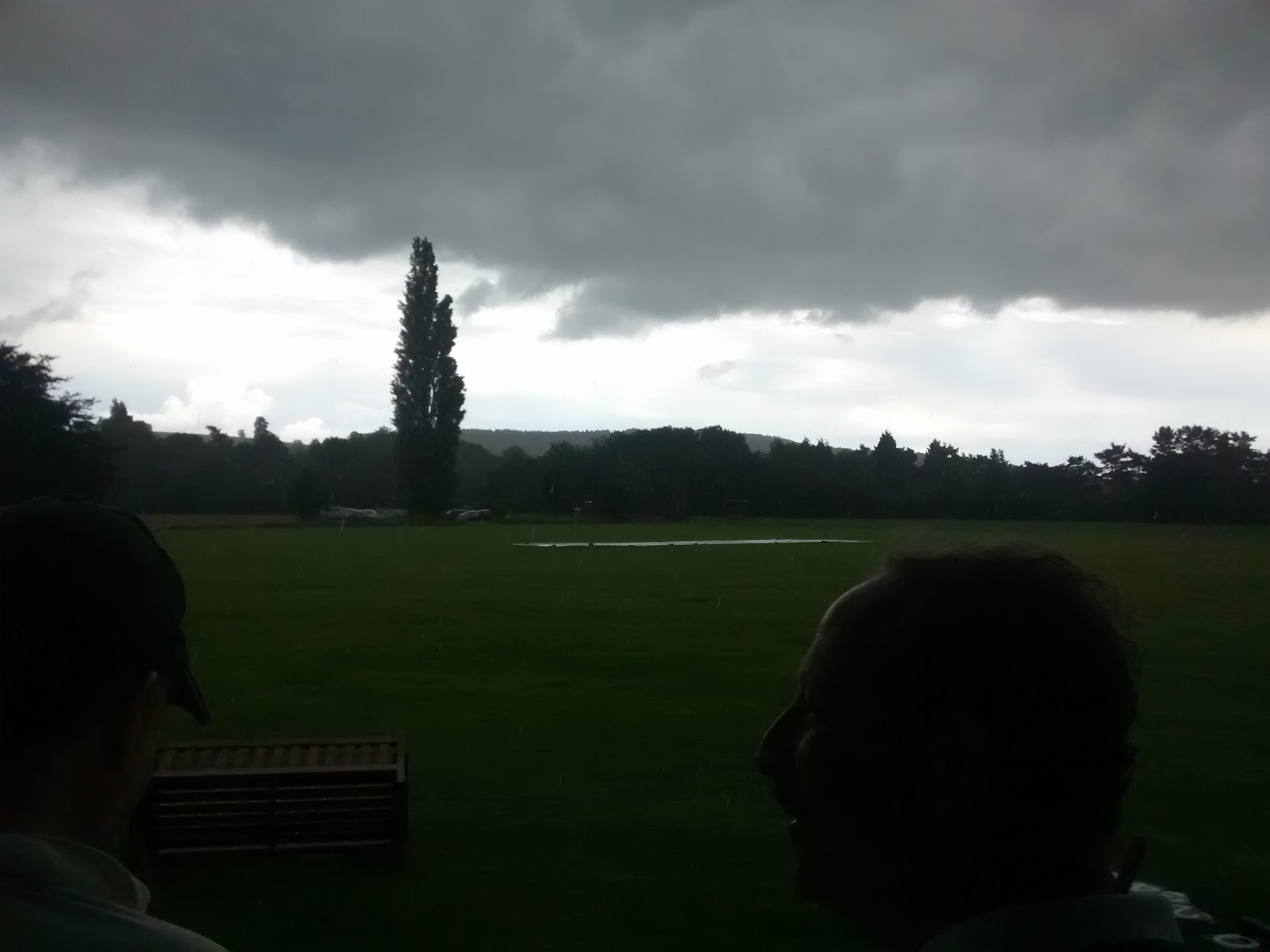 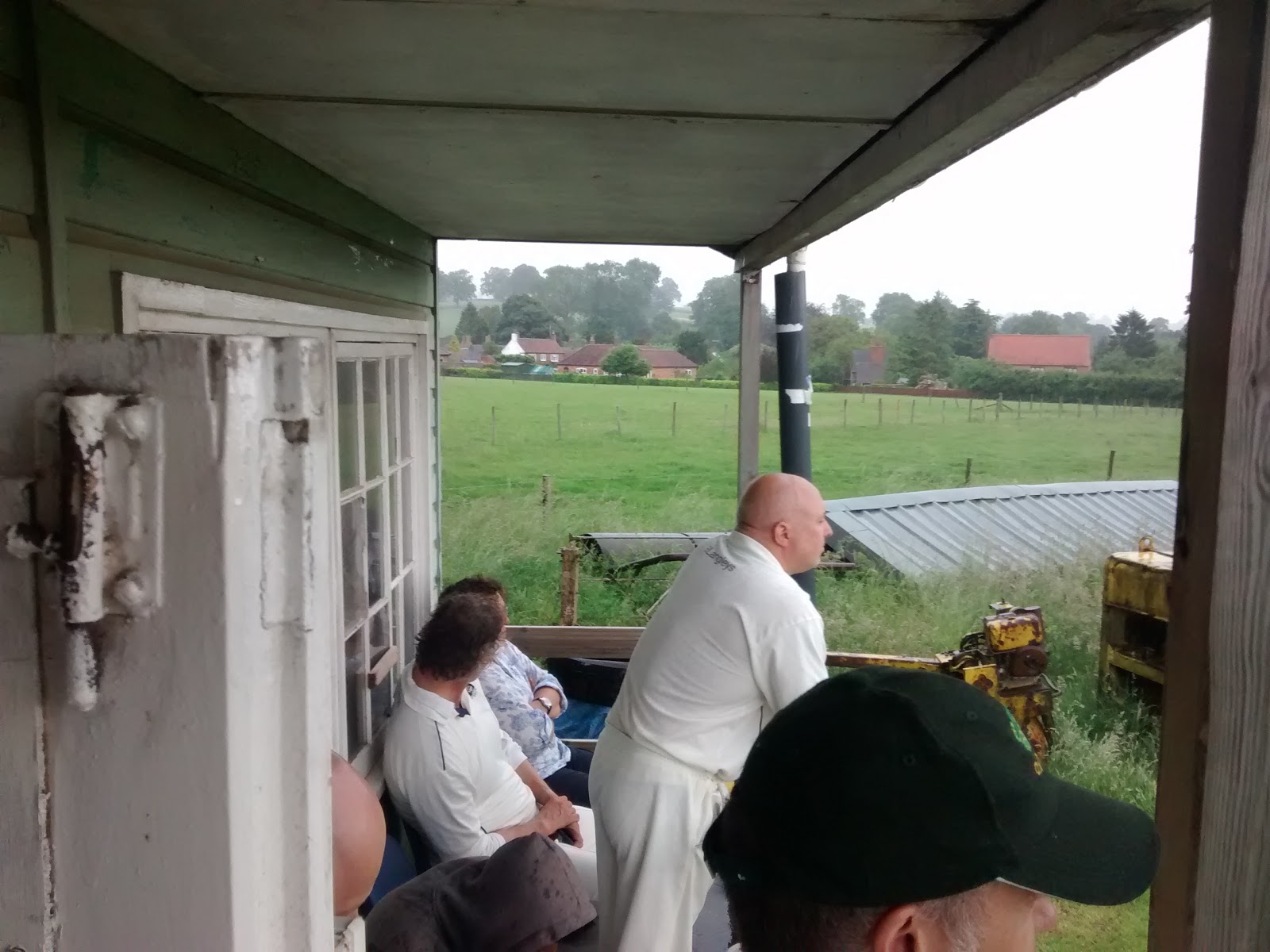 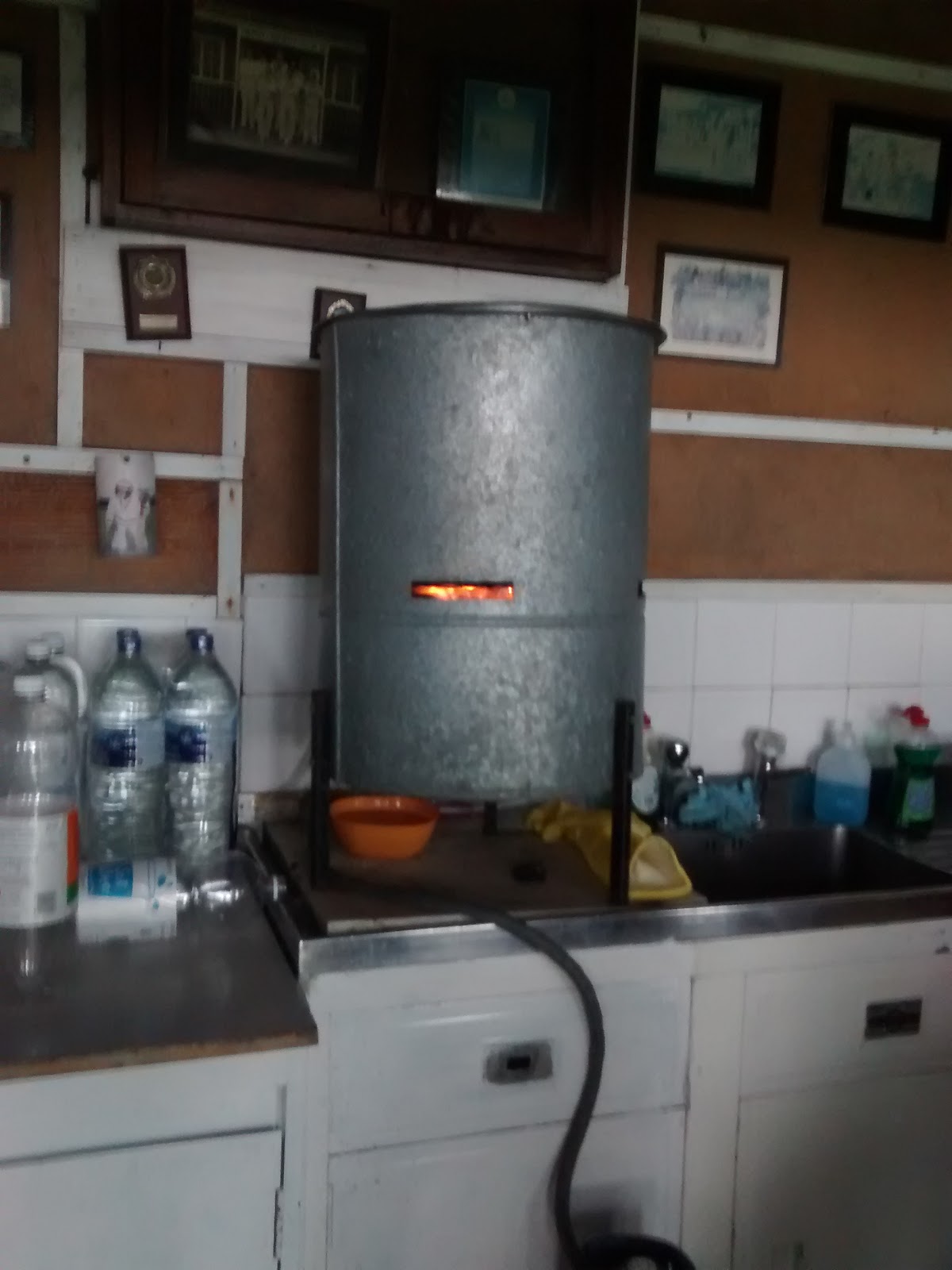 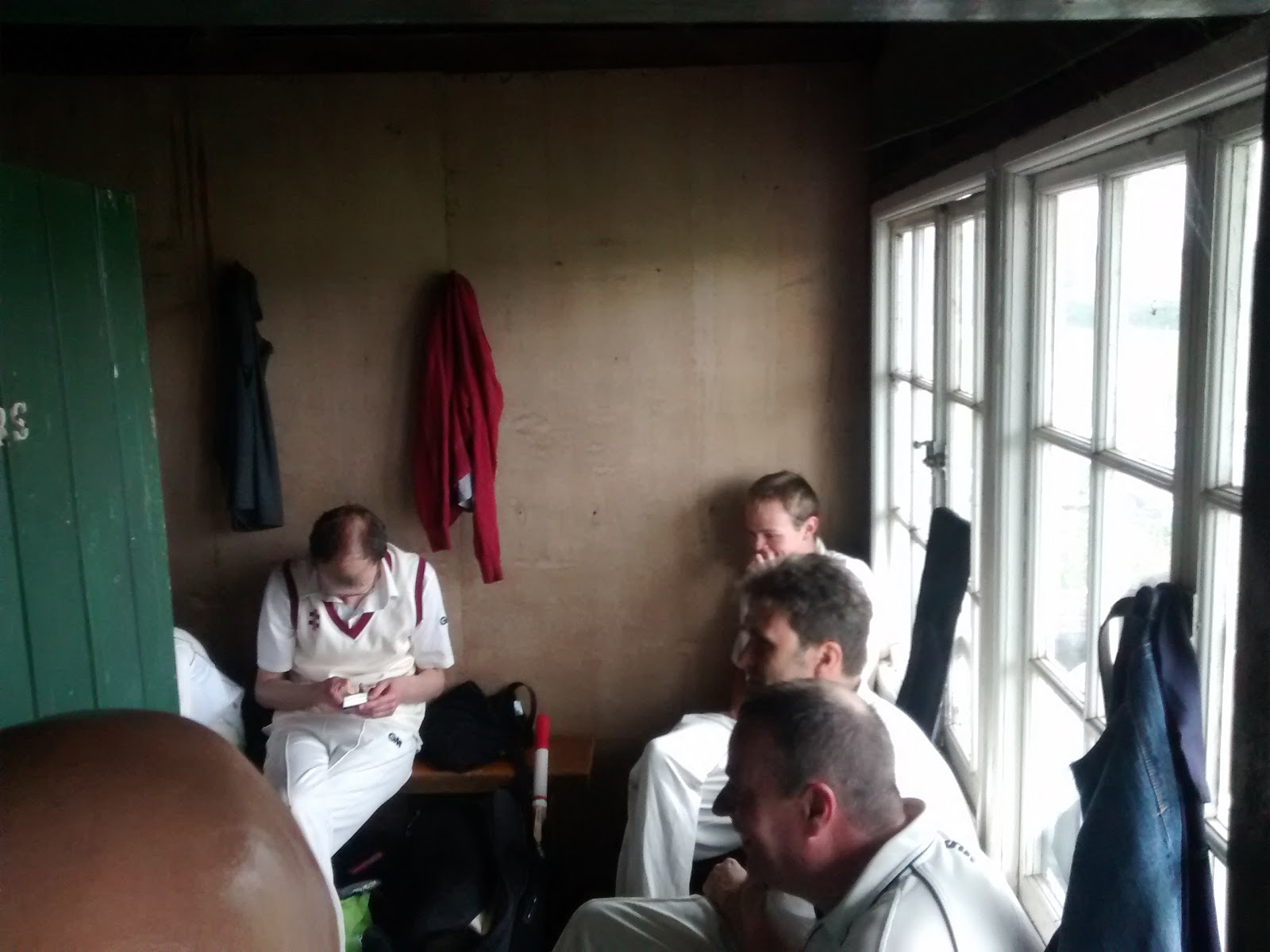 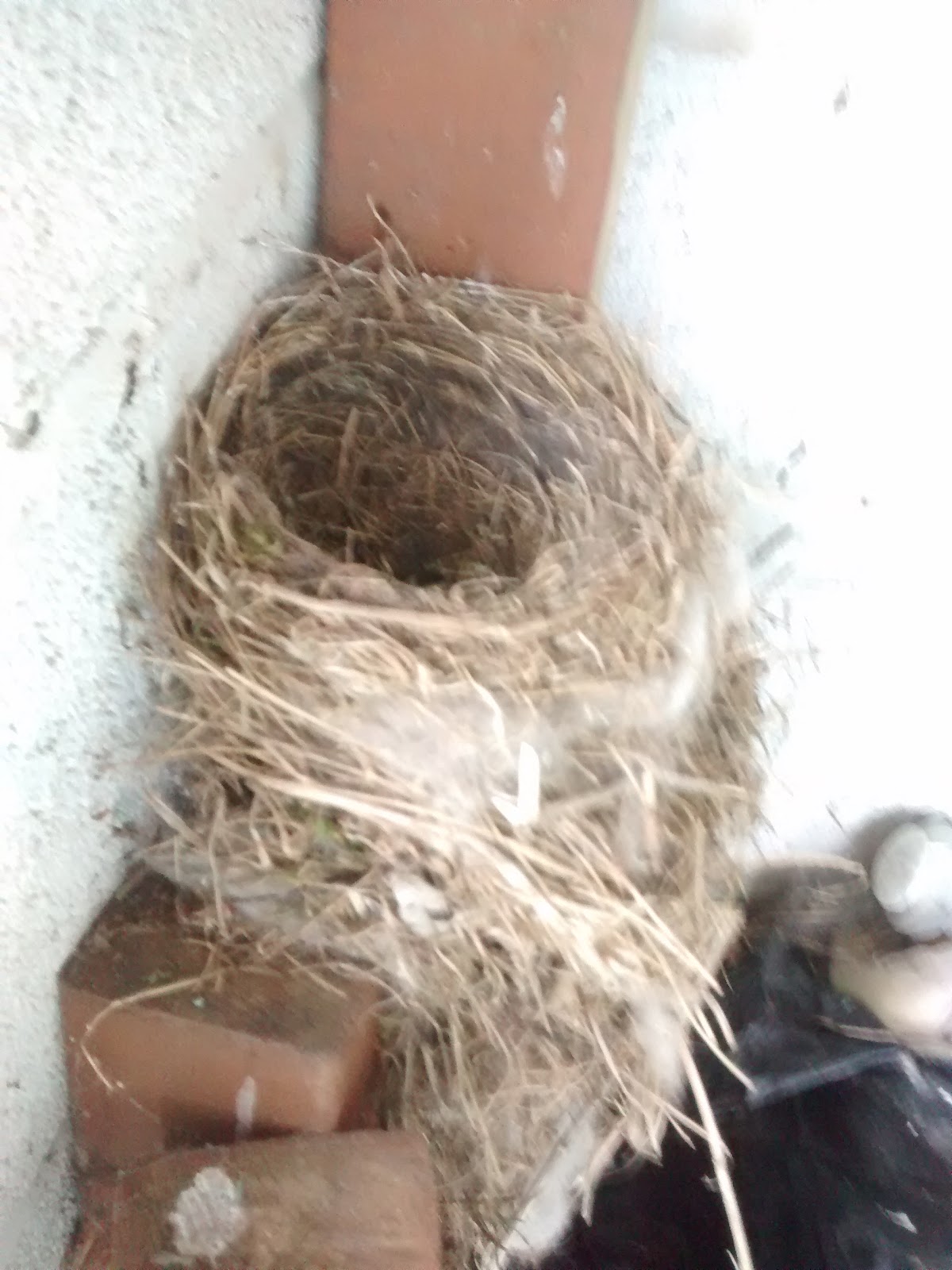 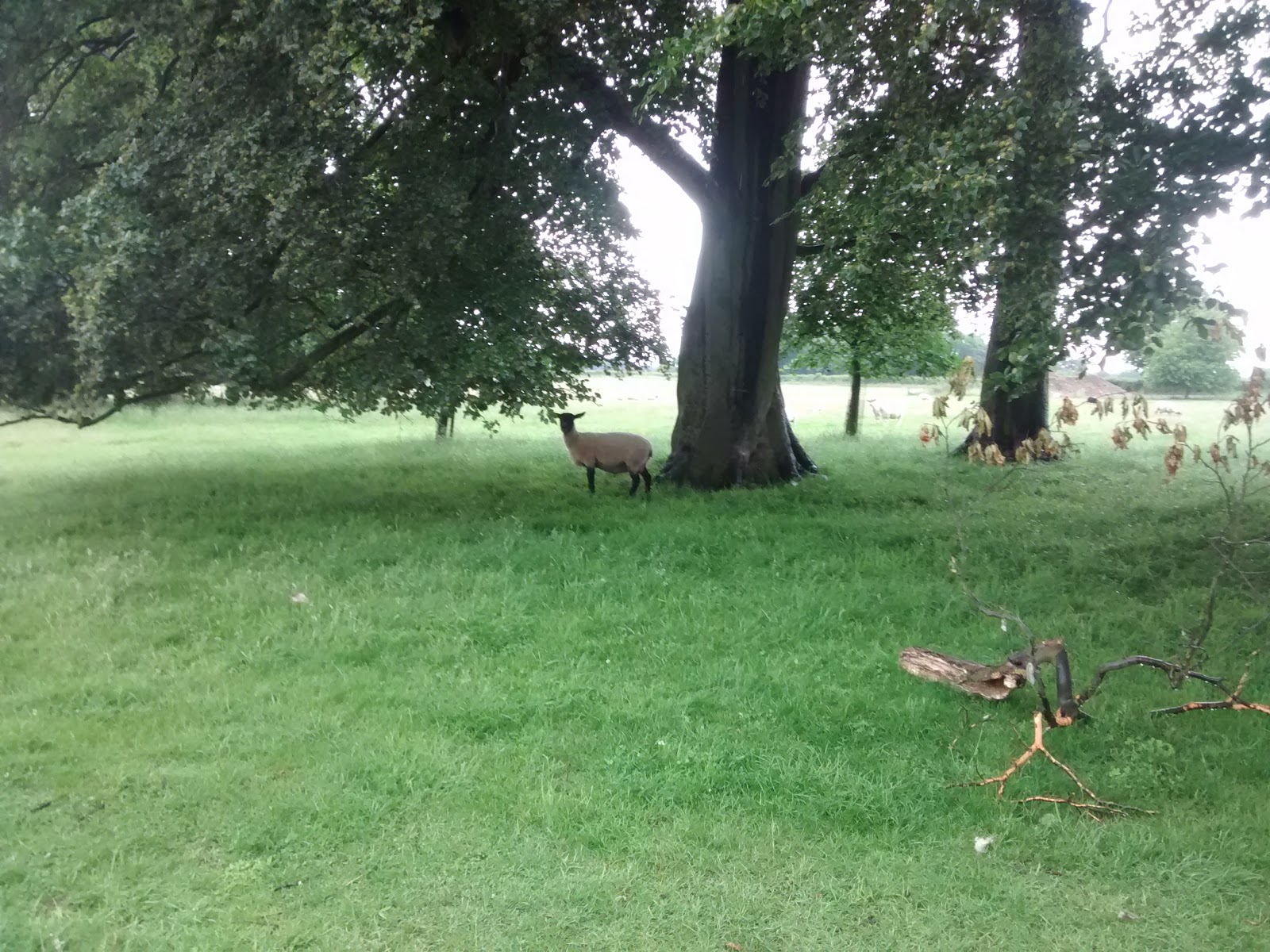 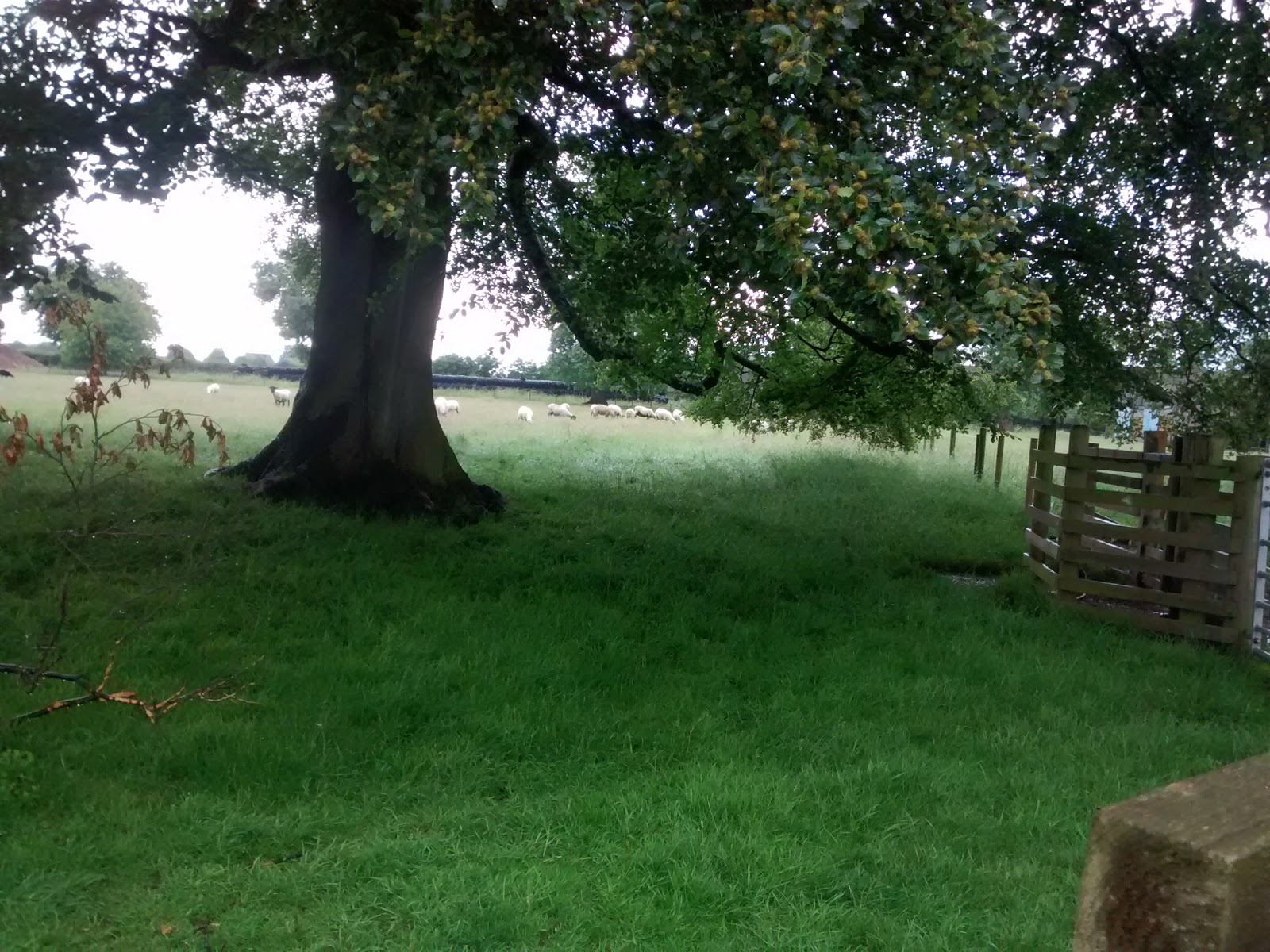 Posted by Simon Douglas Thompson at 14:49