A little bonus update for you here, just to show you the little red breasted builder collecting nesting material from next to my neighbour's bins. The nest site seems to be at middling height somewhere in a big ivy bush on the back fence. 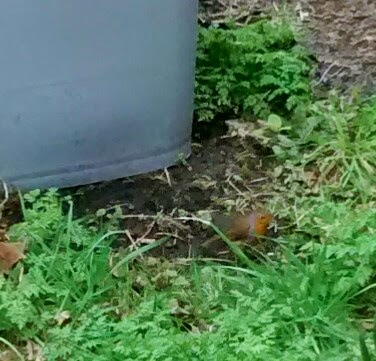 The bird was entirely happy for me to watch at a range of about three metres, but this is as close as I can get even at maximum crop zoom on my mobile phone camera. How I envy folk with nice cameras! I could get something perfectly acceptable for not that much, but it would need a new compute to go with it - this little linux netbook is not up to picture editing, and I'm not sure my old XP laptop will work with modern cameras. 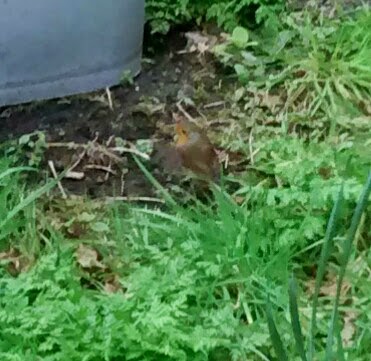 There's also been blackbirds content to trot about on the wet grass in between invigorating sessions of hurling leaf litter around. 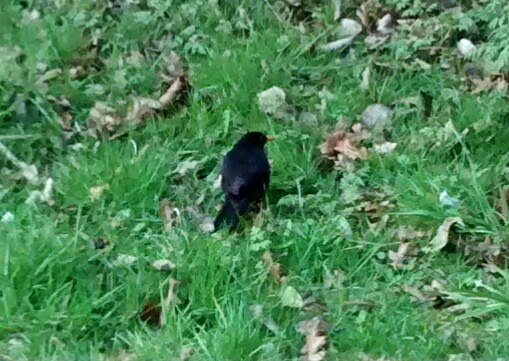 And finally, my folk's lawn has erupted with primroses, and blackbirds seem to be nesting in the cloud trees rather than the pergola this year. 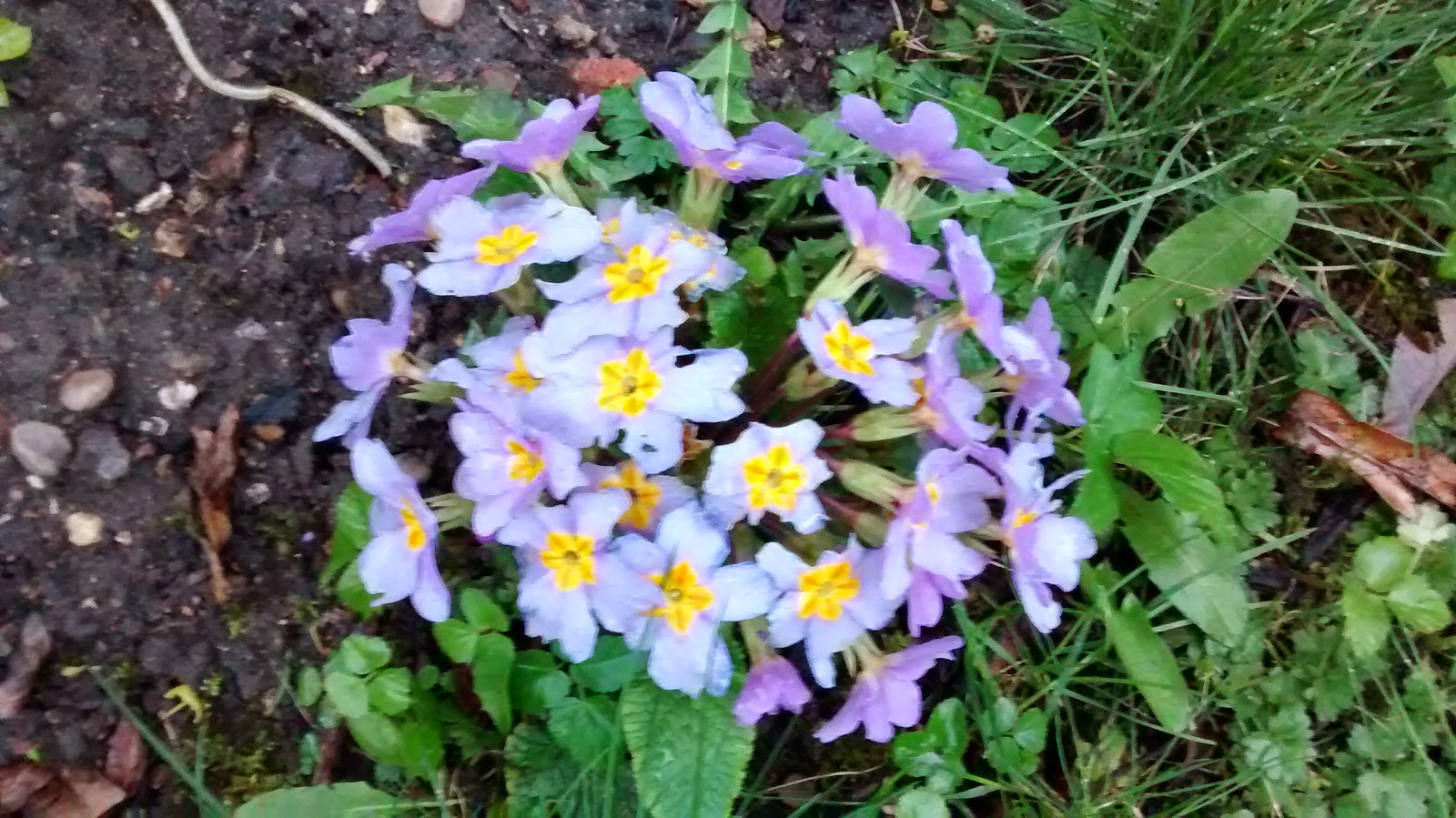 Hopefully great tits will nest in the outhouse again. I'm going to give reduce tuna consumption in favour of sardines, even though I can't cook.

The wind blows, but life warms up, and goes on.

Si
Posted by Simon Douglas Thompson at 13:46 No comments:

I've been short of running adventures lately, and with yet another day of string wind and forecast downpours, my jaunt out to Muskham Lake was iced, and I decided to give up on things of beauty, and run through a rather different sort of landscape.

My initial run took me through Beacon Hill Park, and out through the entrance onto the industrial estate, wincing as my new running shoes had to encounter an unavoidable muddy puddle for the first time. I realised that the Nottinghamshire Wildlife Trust have got their main sign down here, which seems rather odd as I can't believe many folk use this entrance to the site. 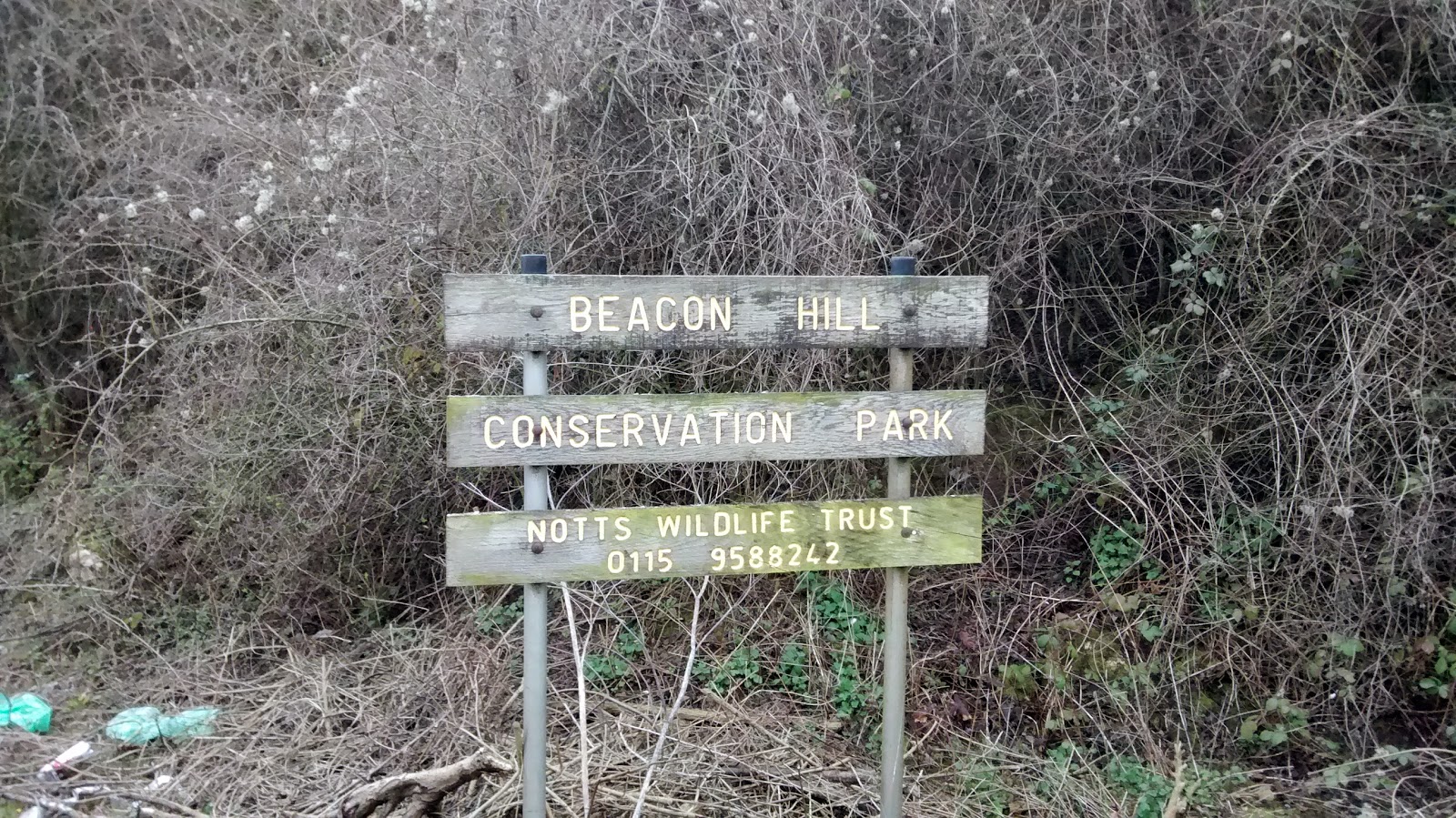 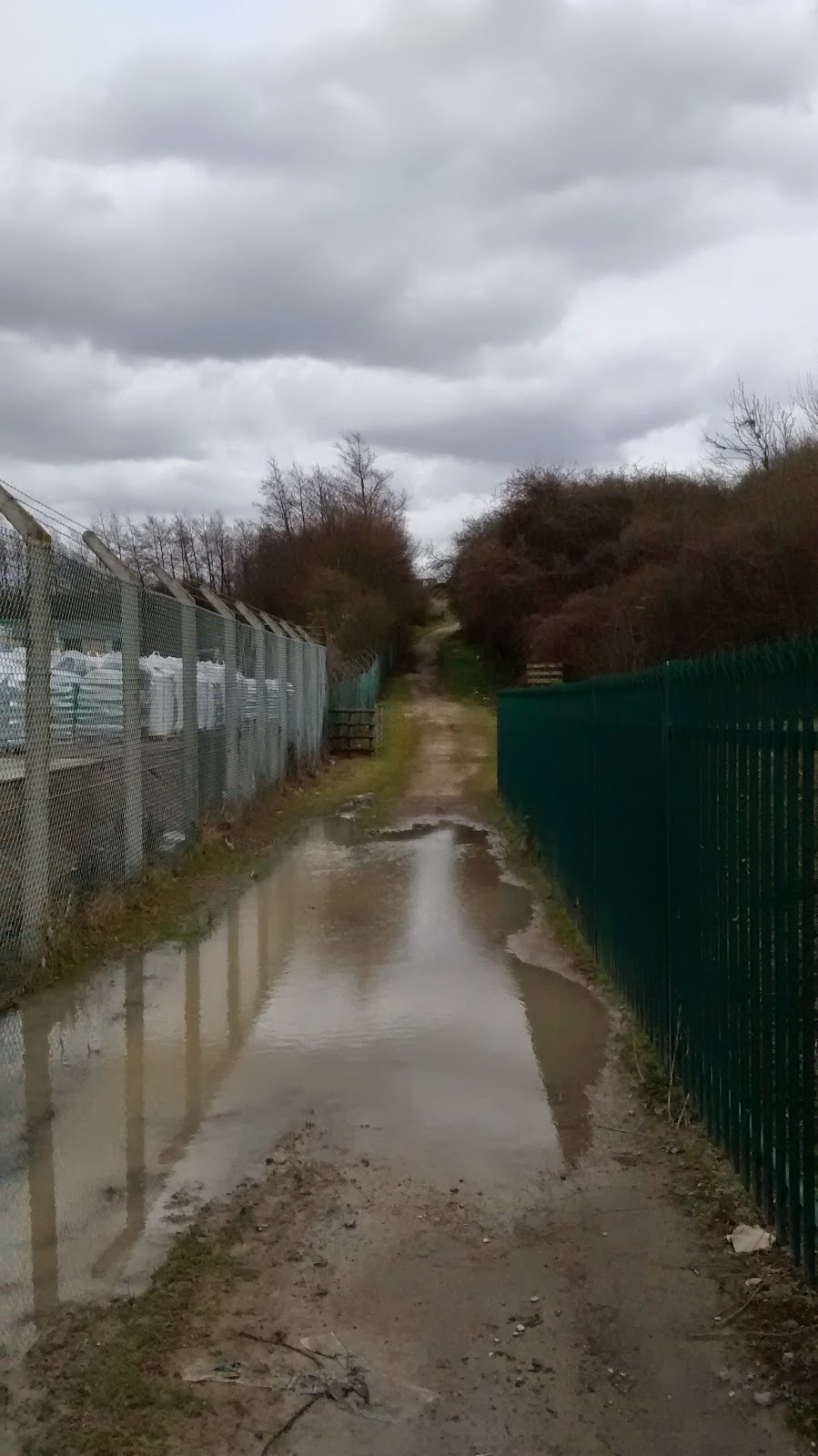 An uninspiring run and always rather dispiriting run along the southern edge of the modern industrial estate before heading across the Lincoln Road, and finding oneself, after a welcome of gyms, vets, and soft play centres, in a crumbling relic of Newark's riverside industry.

The first site you come across is Hoval Boilers, still in operation, but still with some old parts of the building intact dating back to its earliest 1887 incarnation as Farrar boilermakers. Olde worlde industrial boilers and heating systems have given way to biomass boilers and other new technologies. 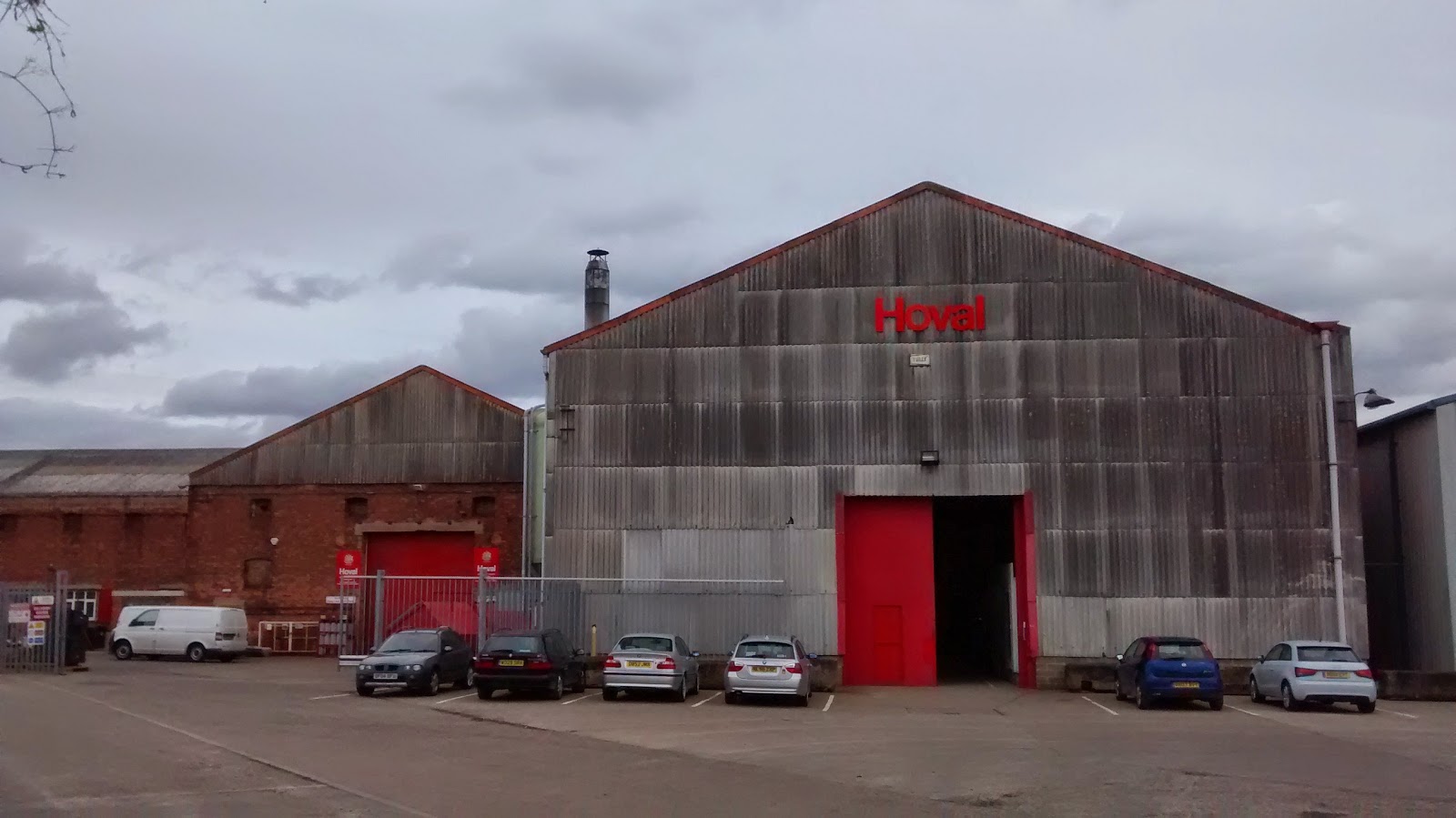 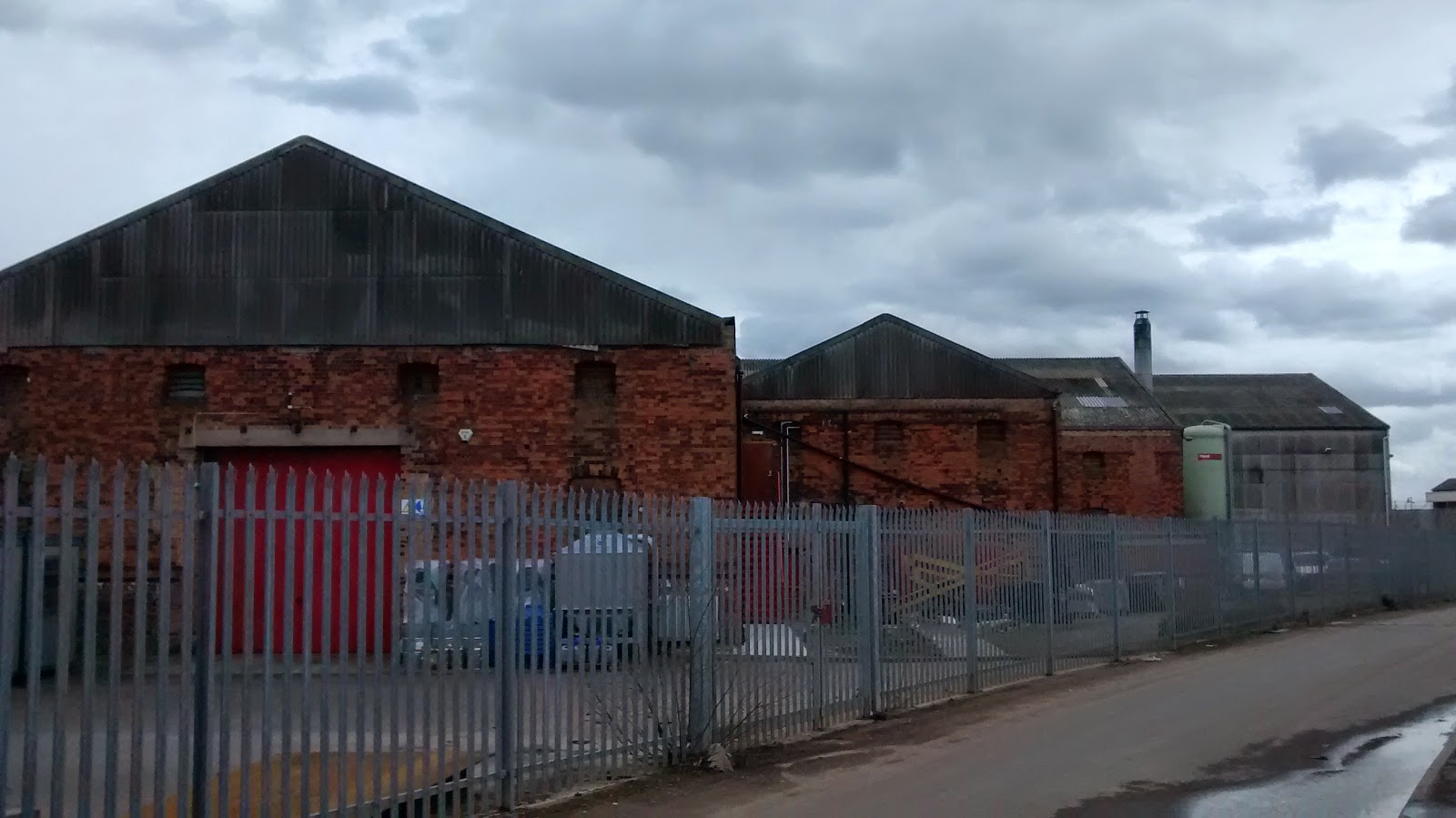 My run then took me along a rough track towards the river, initially past what may have been part of the original Farrar site, but is now a tumbledown building forming part of a scrap yard. 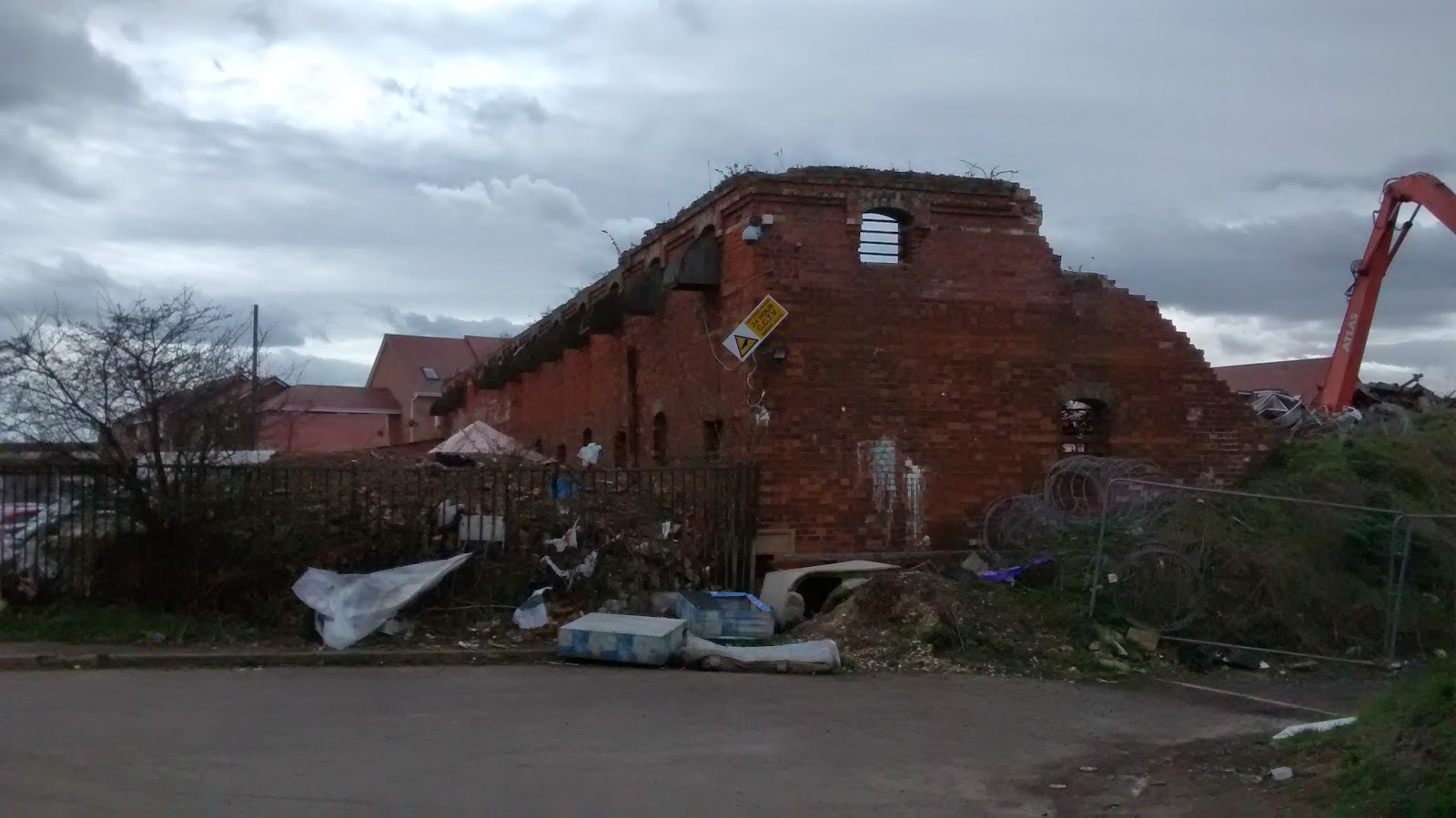 Running along through the fascinating decay, you pass what looks like a small karting track made out of rubber tires, before you come to the end of the track at what I'm guessing is part of the original Quibell's glue factory, a company later taken over by Croda. Oliver Quibell was a major figure in the town's history, and once there was an infants school named after him in Newark. I should know, I went there.

Follow the path round, and you reach Newark's North Lock. 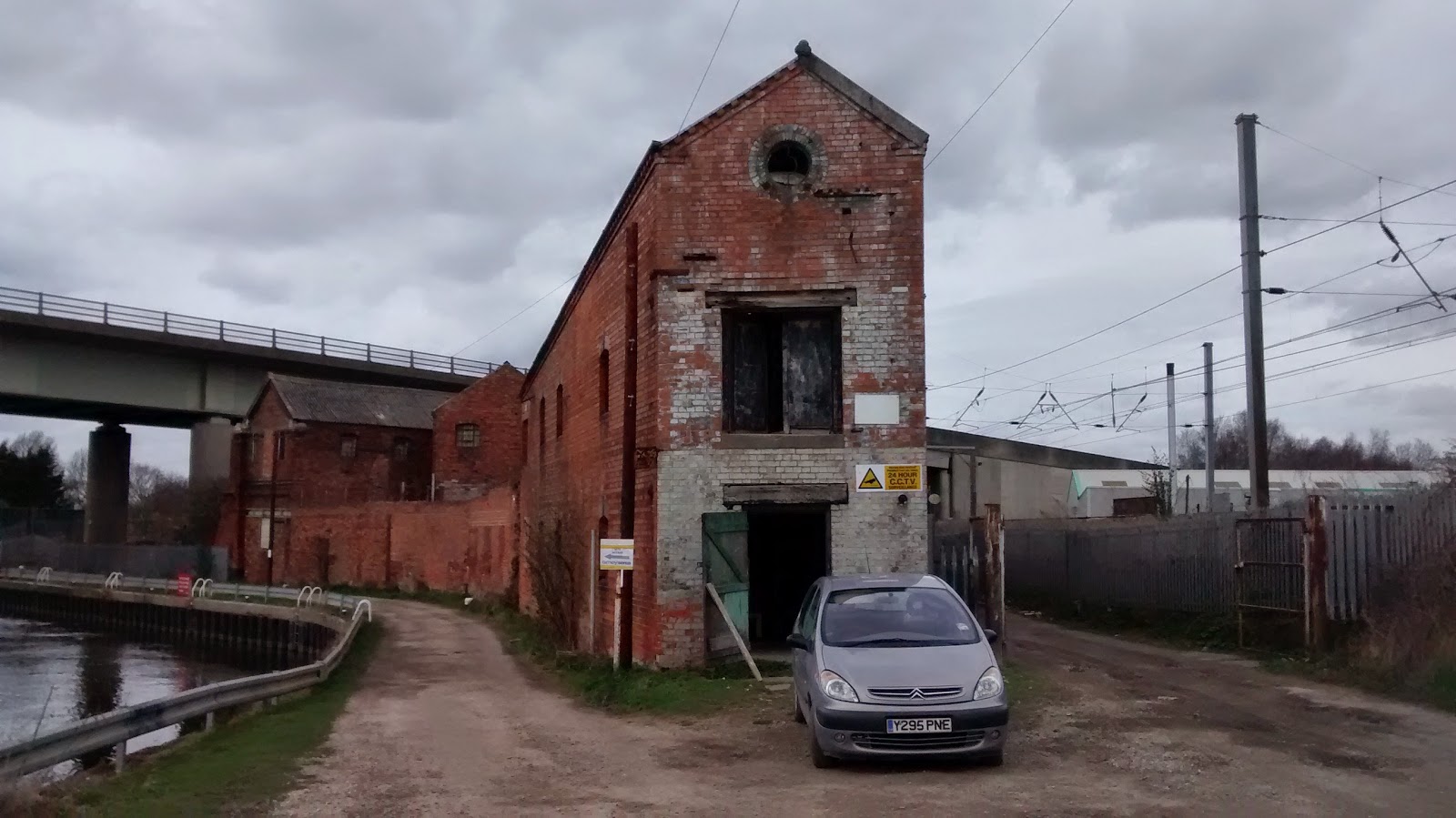 I didn't follow the path round; I doubled back on an overgrown path curiously dotted with some empty cans of Spam, to take me to Fiddler's Elbow Bridge, an evocatively named concrete structure rising steeply across the river, presumably to allow taller boats to access the factories beyond. It dates back to 1915. 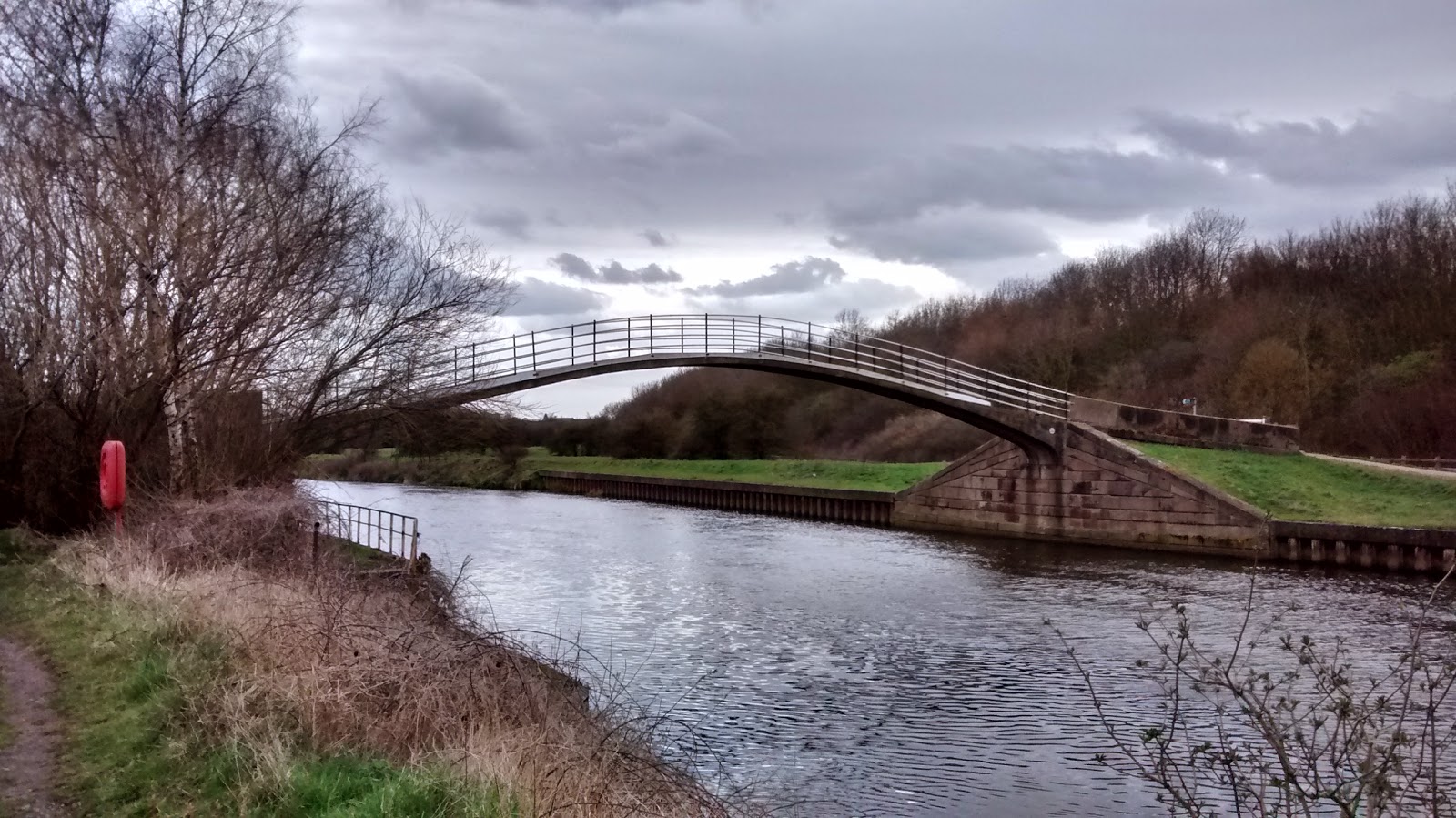 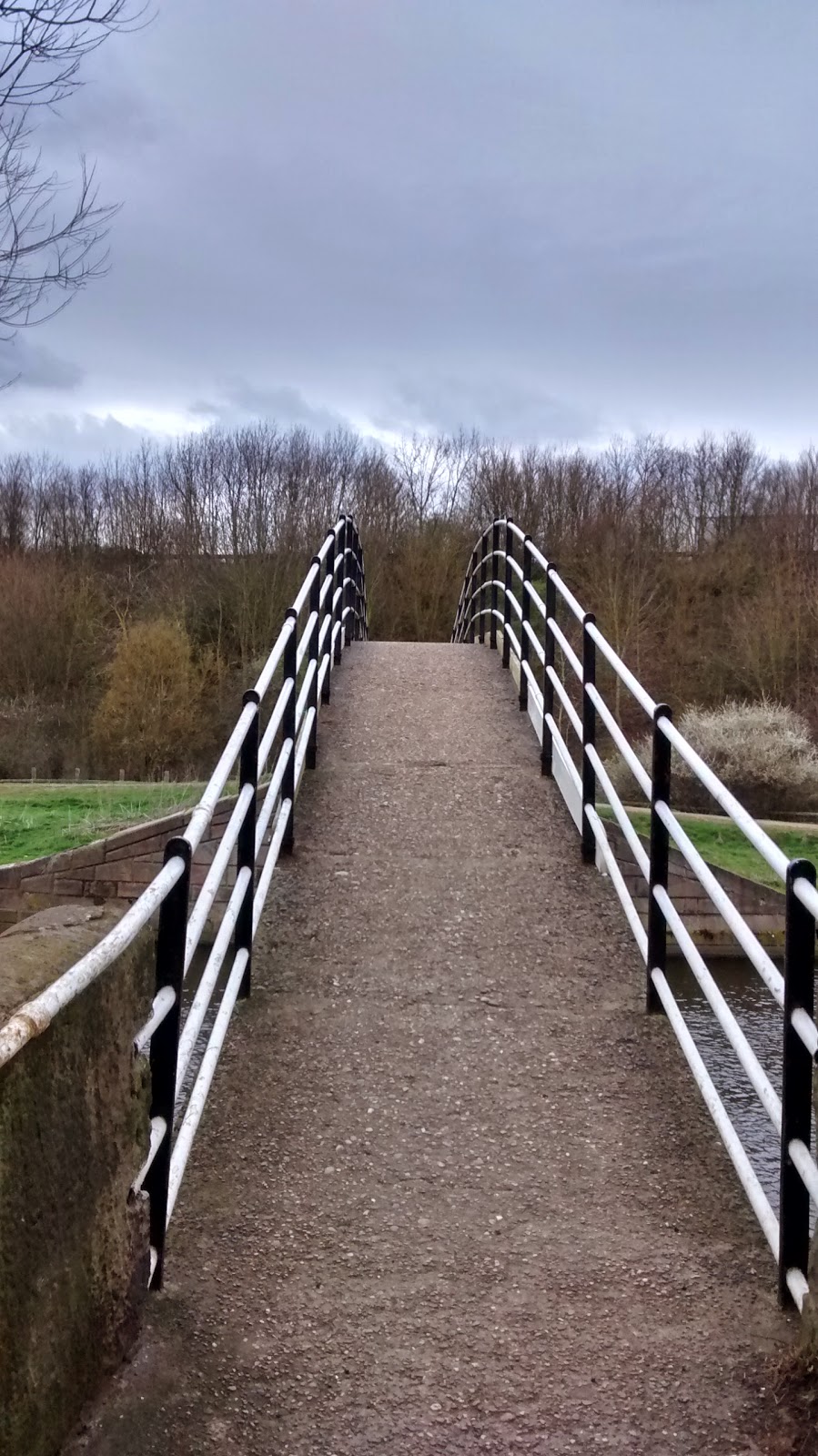 Once over the bridge, the route back to town leads you through rough farmland in which cows (and bulls!) were mercifully absent today. Across the river you can see remnants of wharves, long gone to make way for housing. 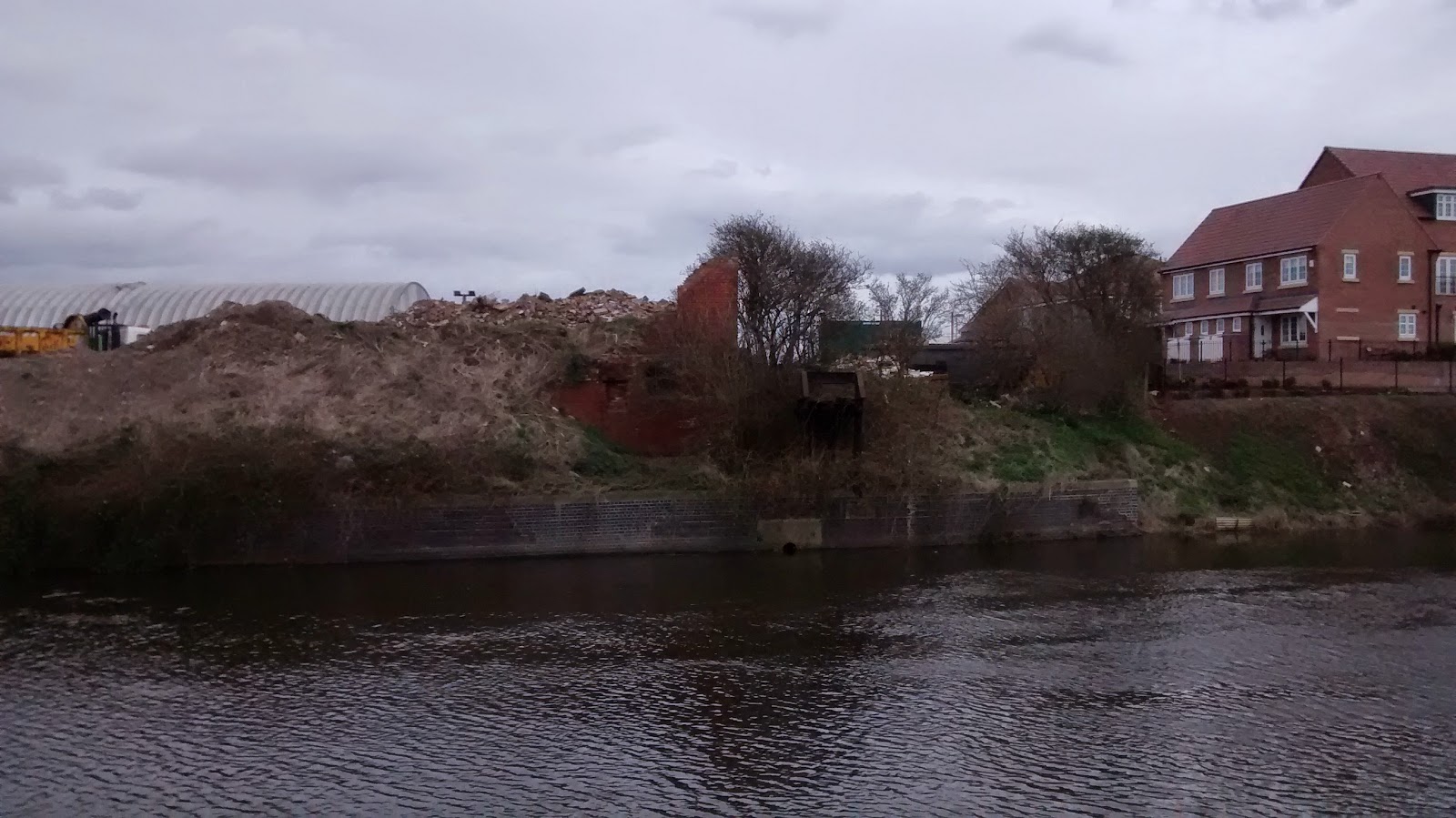 Developments such as this; 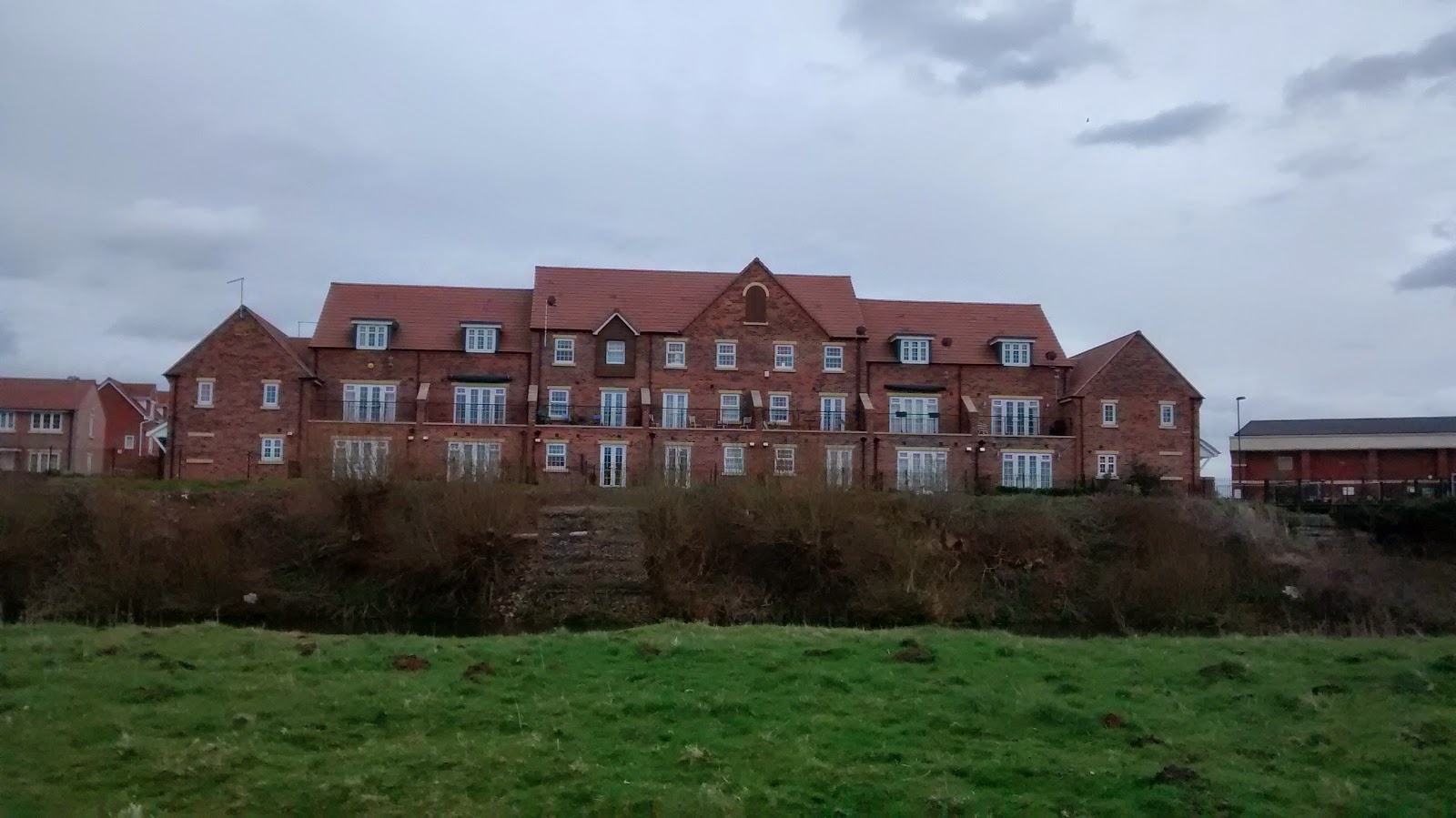 Carrying on along the river, a bridge marks your route. It's a very odd sort of bridge, with not much point to whatever sort of way it carries above, trapped as it is between the river and the bypass. 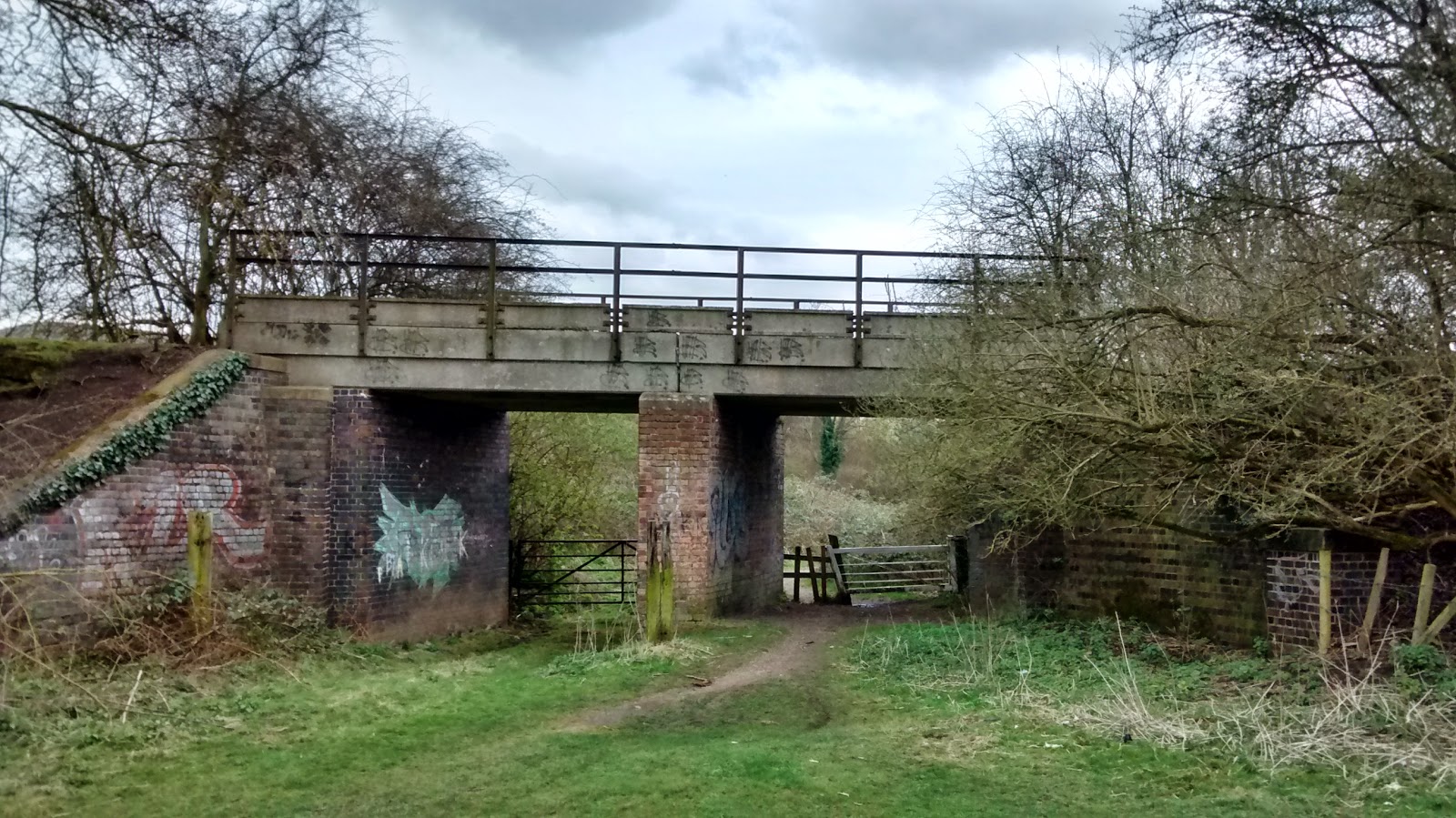 The final waypoint of the run is the new marina, upon which float barges used as homes, rather than to carry goods as they once did along this stretch of waterway. 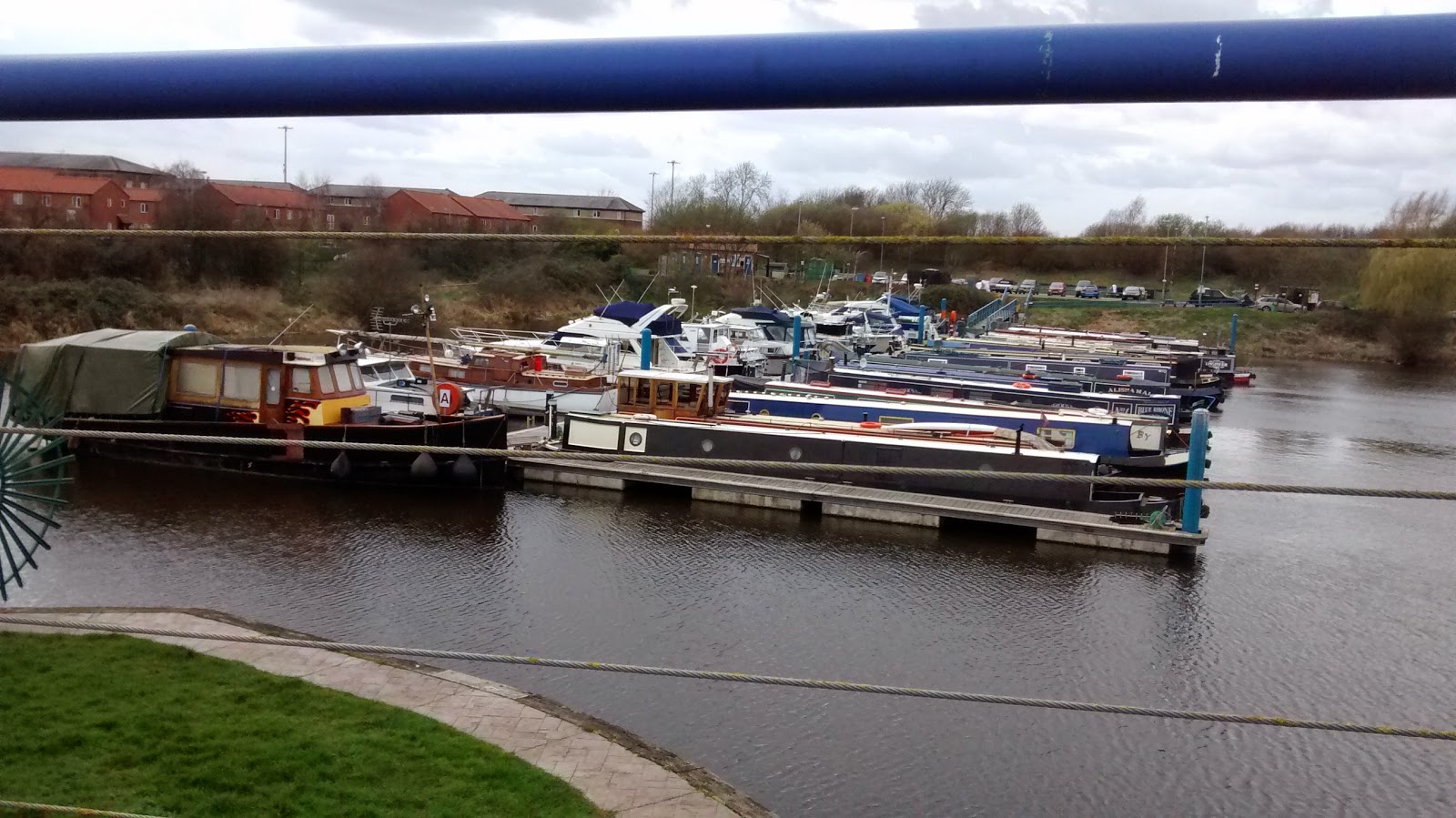 At least the heritage section of the run was over, I still had another mile to go!

Si
Posted by Simon Douglas Thompson at 13:34 No comments:

After two hours in the cricket nets, distinguishing myself by batting equally badly both left and right handed, I immediately took myself out into another apocalyptic wind to search for...well, anything. I had no goal in mind, other than avoiding a soaking.

Indeed as I left my flat, I had no idea of where I was even going to go. But surveying the sky revealed it had a fair bit of blue, and this reassured me enough to head out on the Owl Road.

And Owl Road that I nearly got blown off the moment I headed onto it.

Some brown game birds were startled at my approach and headed off into the scrub at the northern end of Hawton Works, but I couldn't identify them at a distance but were probably female pheasant, which seem to be around in huge numbers this spring.

No matter which way I ran, the wind always seemed to be in my face.

In Hawton, the sun came out, skirted by grey veils of rain falling from darkly threatening clouds. Far too early in the year to make hay while the sun shone, but on the Hawton lungwort, someone was at work.

One of my contributors here told me to keep an eye out for hairy footed flower bees on this plant, but not today. This - I think - was a worker early bumble bee, one that had a middling day judging by its pollen sacs, but was going to mine this lungwort for all it was worth.

To see a bumblebee this time of year is still noteworthy, but mainly you see queens around at the moment and I don't think this was one. It even allowed me to get so reasonably acceptable photographs, before calling time on the encounter and heading off towards the churchyard.

While I headed for home.

Whereas last week a freezing cold wind was blasting down the Newark Parkrun course from the North, this week it was a slightly warmer gale blustering in from the South.

And yes, there was a chiff chaff singing its heart out in the park again, this time over by the bank of trees overlooking Devon Pasture. I could hear it over the sound of Rev. Richard Coles interviewing Jason Donovan on Radio 4.

Parkrun is a strange event for me. Even after dragging myself out of bed at 8am, I swear I will always take it very easy and just trot round the 5km. But as soon as the hooter goes - a recent innovation - it's like the Pamplona Bull Run, and we descend down the hill like maniacs, myself among them. Today I was in the heady position of fourth place after a hundred metres, before the usual procession of elderly folk, young children, pushchair pushers and women being towed by dogs made their way past me.

Alright, I'm being a mite harsh on myself, although the dog thing is true. I came 16th in the end, in 24.08. Not too bad for the time of year, and luckily the wind was on our backs on the long second part of the lap.

What a wind it was! By the time I had cleared the finish and was sat at Rumbles with my tea and scone complete with concrete butter pat, the trees were bending, the flags were fluttering and a kite was flying in mesmerisingly crazy way.

That inspired me. I thought I would try and take a few photographs - a still medium - to illustrate a moving one, namely wind. They could have turned out far better, but there just weren't enough billowing plastic bags to chase.

Which is a good thing, really.

Figured amongst all this chiffery, this little footnote needed a post of its own.

I was busy investigating the blossom in the Sconce Park orchard for bumbles and bees, when I realised I was dealing with two different types. One is somewhat denser, has green stamen but above all smells positively glorious! 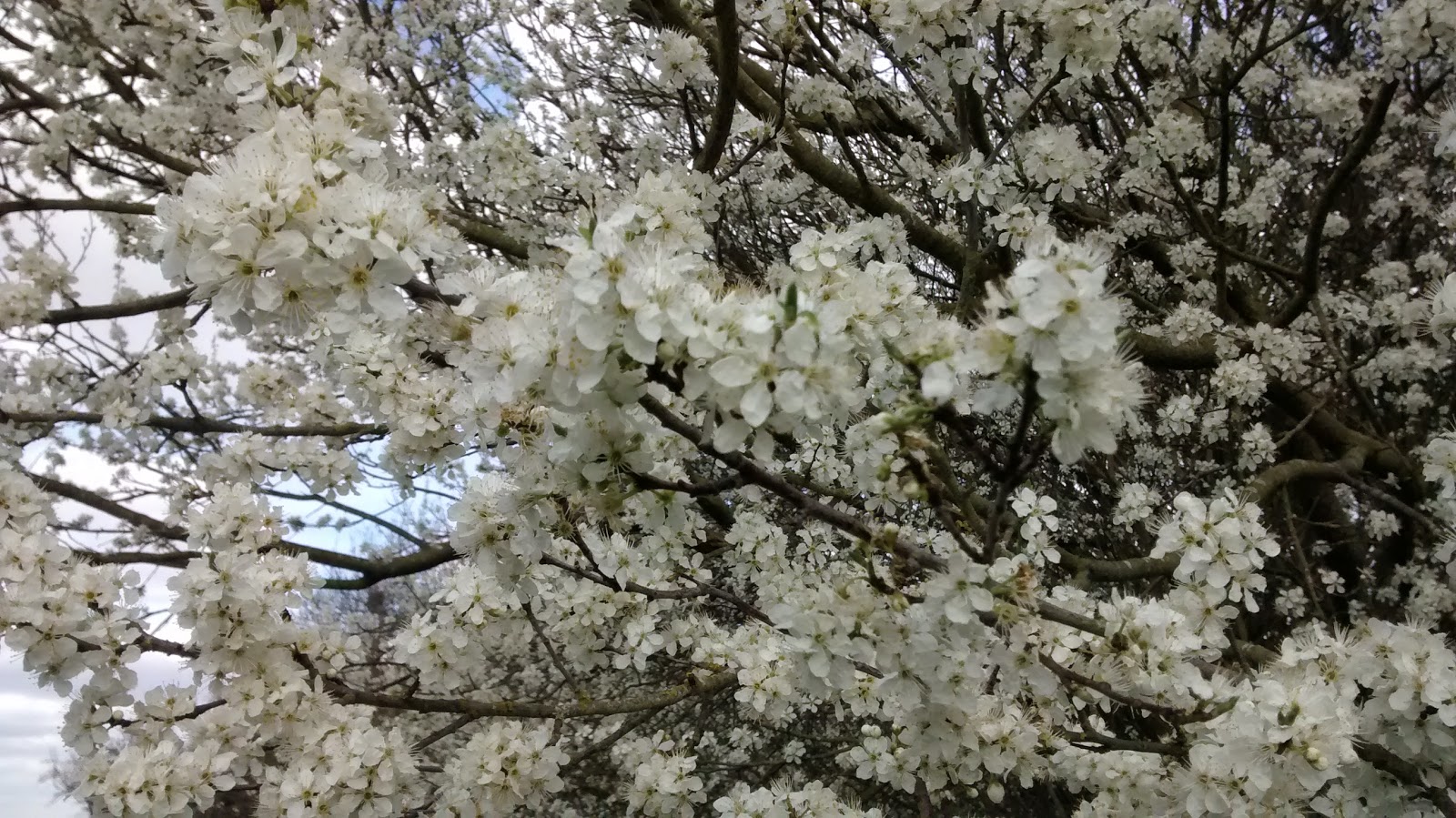 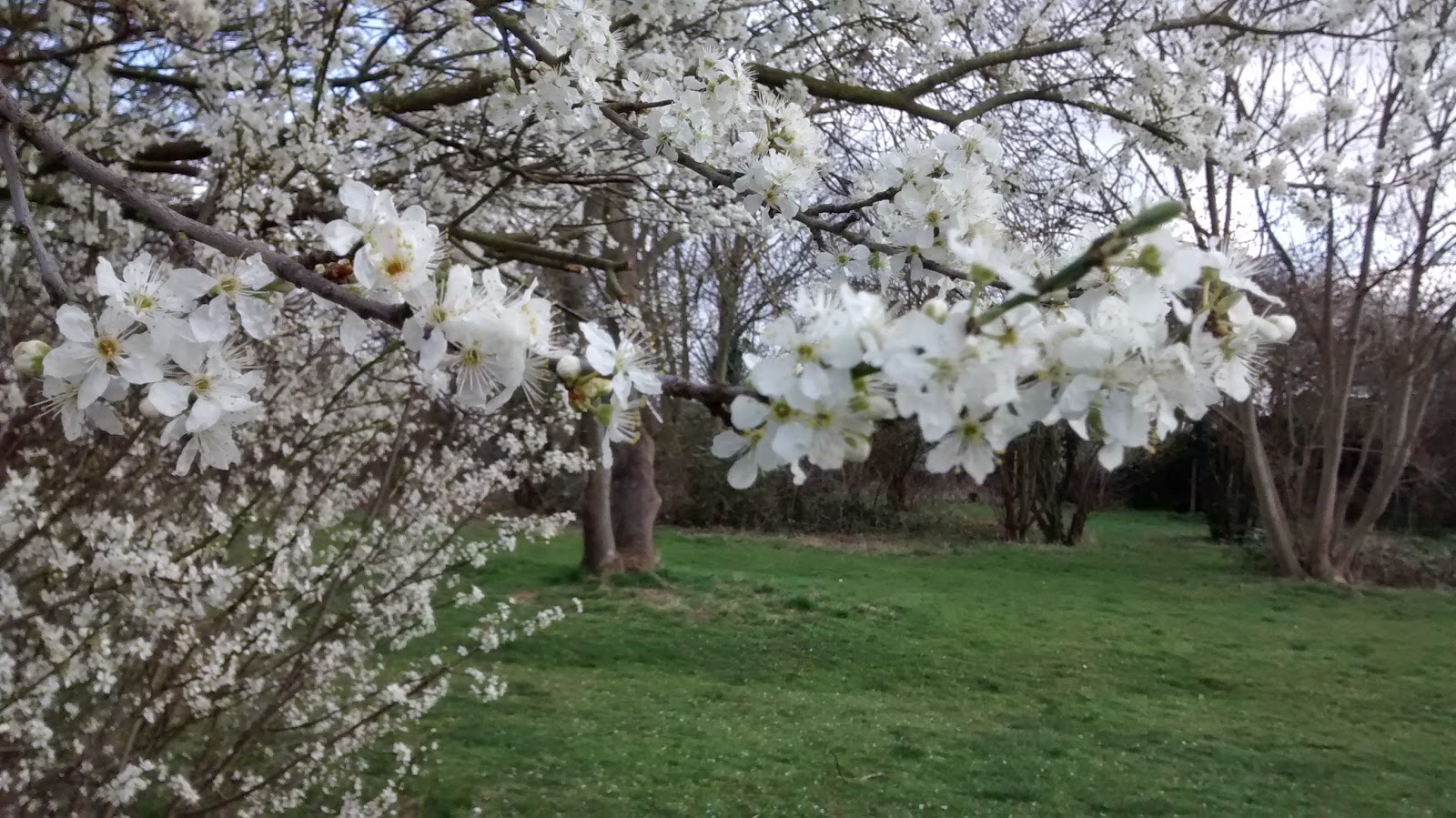 The other has a slightly warmer hue, pinky brown stamen and despite having no odour, seems to attract more honey bees! 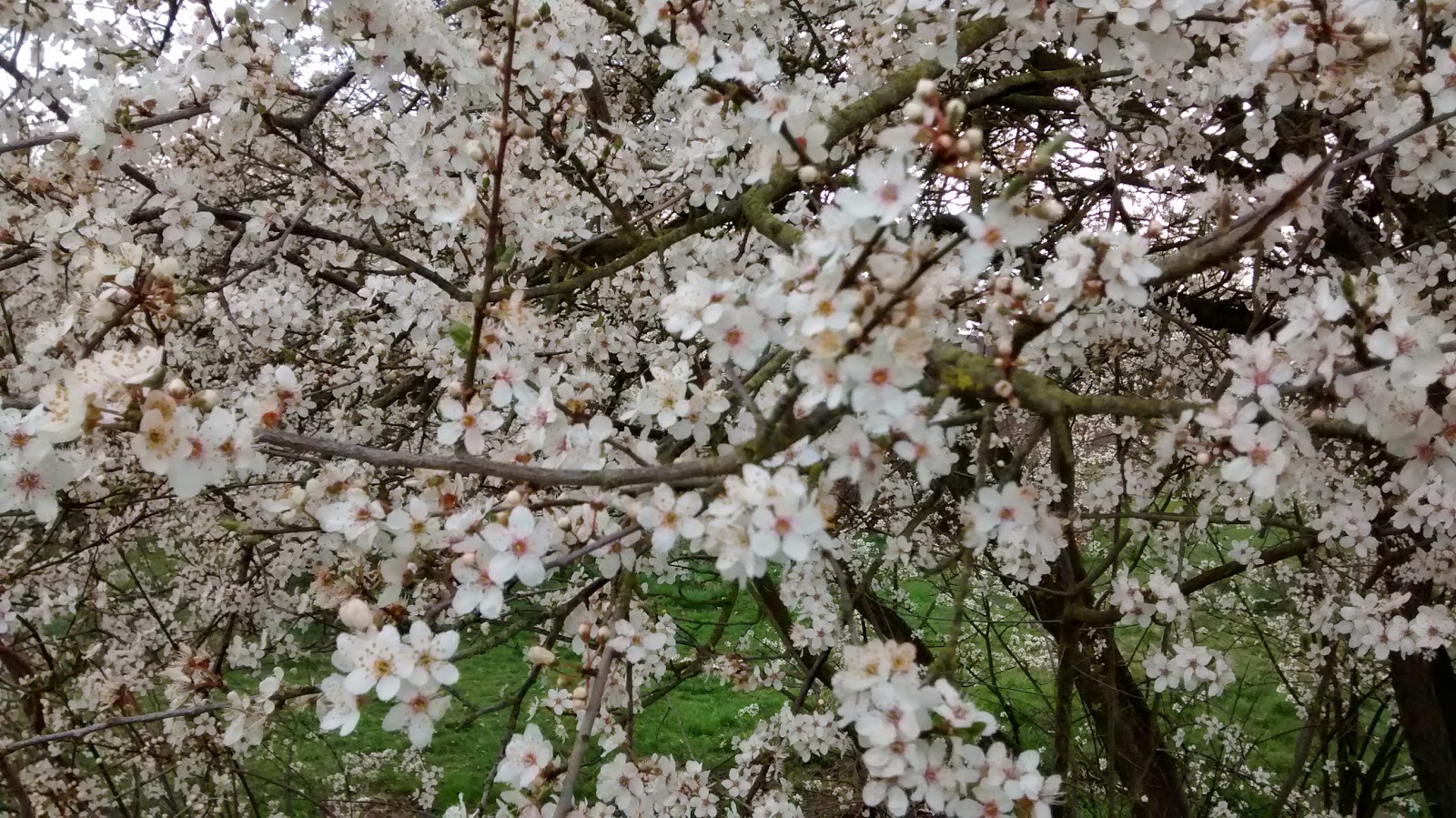 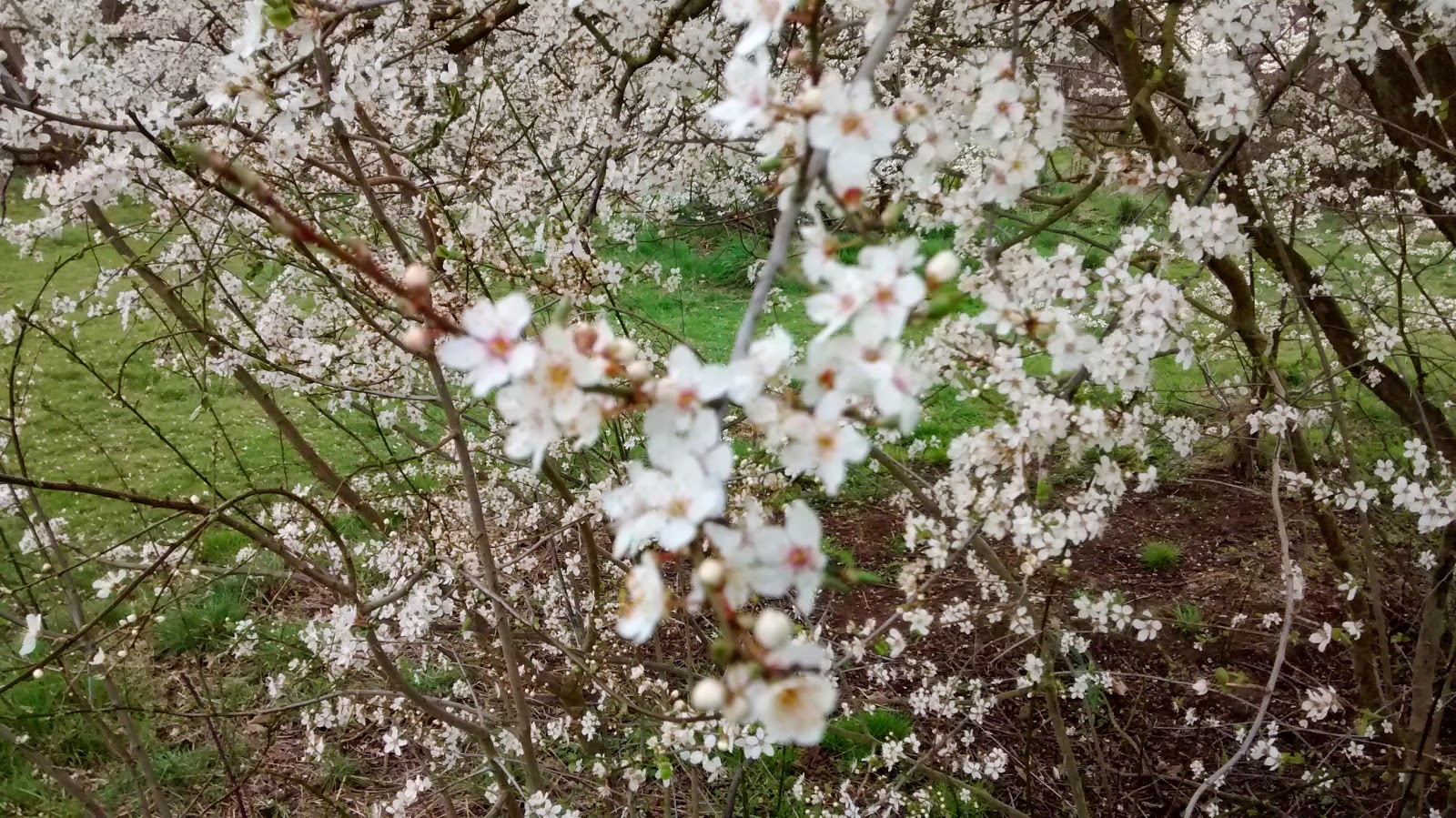 I have no idea! But hopefully soon, both sets will be alive with bees and butterflies obliging the camera.

The Chiff Chaffs are Singing in Newark!

That's what the chiff chaffs are telling me. Not that I've ever seen one, no for me to spot such a tiny warbler high up in the trees would be impossible. But the call, the other major sign of spring besides the appearance of brimstones, is as loud and distinctive as anything you will hear from the local avian choir.

I was running on the lovely little section of country that separates Clay Lane from Beacon Hill estate. I had flushed an angrily croaky pheasant, a bird I am seeing in increasing numbers in unfamiliar spots this year, and had just caught site of the white rump of a jay - disturbed not by me but a squirrel - when I began to hear the familiar call, piercing above the sound of Radio 4 on my headphones.

The chiff chaff is a slightly aphasic bird to my ears, failing to understand why it has been given the name it has. Its song is nothing like its name, I always hear it as an aspirated "Doowoiooop Dooweieep", introed and outroed by a series of flighty trills. It sang as continued up the hill, and indeed as I left the park, fading out in the background.

The bird had a sense of history, as I'd heard the first one of 2014 in exactly the same location.

It wasn't the only one I heard either. As I entered the orchard in Sconce Hills park, a second bird was singing as I inspected the blossom, even more loudly than the one before. But, no matter where you look, following its call as it moves through the trees, you never ever see the bird that is singing so loud.

It's such an elusive bird, the chiff chaff!


Posted by Simon Douglas Thompson at 14:23 No comments: