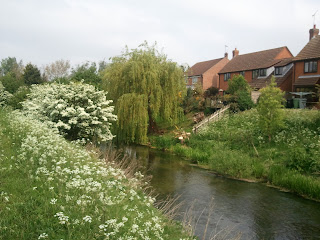 This morning (ish)  having been fina ly driven  from my flat by the shrieks of some woman going "eeeeeeeeek its Sarah Burton I got on the bike and headed for Claypole village with the intnetion of having a look at the river and maybe having a drink in the pub too.

I know for a fact there are some baby eating sized Pike in the Witham, but in the village, nothing to be seen but fast flowing water over that strange slatey bed. A few white ducks  (boring but no doubt tasty) puddled about, and the pubs were shut. When I say shut, they didn't seem to be there! I'm sure there used to be two!

On the trip back, the hedgerows seemed alive with birds - chaffinches, yellowhammers and cutting along by the famous old lightning jet at the back of Fernwood, Goldfinches were also out for the day, no doubt hacked off with the wedding saturation as well.

So that was a pleasant 12 miles or so on the bike, decided I needed double punishment after too many beers last night so headed out for a run a bit later, wanting to perhaps have a look at the Devon, and the dinkly little reserve run by the council just off Sconce Hills Park. Well, it was shut for the day! It's still a developing site so was curious to see if there was any more to be seen than last year. Couldn't tell! The picnic tables looked nice though.
Posted by Simon Douglas Thompson at 11:08 No comments:

Will try and keep most posts fairly brief, don't want to bore you all when really exciting things like watching the royal wedding or re-arranging your sock drawers are in prospect. Tomorrow I will try and be all hard and stuff and cycle and run again. Keep that bottled oxygen handy? Yeah, I reckon.

No partridge outside work tonight, and I miss the Starlings gathering over KFC as I go home!
Posted by Simon Douglas Thompson at 11:41 No comments: Posted by Simon Douglas Thompson at 11:07 No comments:

So, to give you a flavour of how I drag my body around, this was a fairly typical run I had at 3pm this afternoon, on a pleasant, cobalt skied day with a bit of a breeze.

I guess the first point of interest I come to is the cycle path by the fishing lake just off London Road. Normally this time of year, a lot of Brimstone butterflies are to be seen along here, but at the moment there hasn't been one - a lot of Orange Tips though. On the lake are Mallards (no longer having mating squabbles, some swans (hilarious "Don't Eat the Swans" signs still around much to amusement of local polish folk) and Canada Geese. Usually there's a few Tufted Ducks about, but not today - maybe they are nesting - and the solitary Great Crested Grebe I've been seeing was on holiday as well. The Coot and Moorhen chicks with their enormous comedy clown feet will soon be out, I reckon.

You can follow this path all the way to the Railway Station but it becomes a bit of a bleak urban dung heap further along with an algae choked drain alongside that some waterfowl still find attractive for some reason.

So I turn off up onto Clay Lane, and bypassing the main park follow the main lane till it turns to dirt track. All sorts of funny little paths to follow here, I turned off the lane onto a path that leads up past some attractive stand of trees (see previous pic) rather than follow the lane to the end as I sometimes do.

See, in the countryside now. Ten minutes from the town centre on foot...

This path leads up to the back of the old part of Beacon Hill estate, and last year Ringlet butterflies would erupt out of the low bushes alongside in large numbers as I stairlifted my body past - it is quite a steep little climb but with a fantastic view to the south when you get to the top. This year, the Ringlets are still in bed at the moment.

Cross the estate, then cross the road (careful!) and you come to the signposted east entrance to Beacon Hill nature reserve.

This first involves a long run between a long copsey thing and a farmers field - I've never really seen anything that exciting along here, but that'll be my useless fault - today a Buzzard could be seen in the far distance. The path then drops down to the new tree plantation, again last year Ringlets were abundant along here but now, a few Speckled Woods made an appearance at weekend to join the ubiquitous Orange Tips. At the other end of the nursery (following picture) I take the path as it drags west up a slope - favourite spot for small flocks of Chaffinch earlier in the spring - and enter the large open meadow where there are large amounts of rabbits to startle and imagine putting in a pie, and later in the year birds foot trefoil litters the ground.

I turn off here, and exit down the hill into the northern industrial exit - past some weird industrial enclosure warning of "explosive gases", and an odd area next to it I call "Butterfly Park",  a scrubby sort of wasteground of Buddleiah and a tall yellow god knows what weed that in 2009 was full to the brim of Peacocks and huge numbers of Painted Ladies. Last year...zip.

After this, well it's all boring till you reach the river, and attractive though it is there's not a lot to see. However, by the town lock a Heron is often to be found standing tall and silent, and a Cormorant fishes down here, which I always find fascinating to watch, where will he pop up next? The other day he was drying his wings on an island in the river, watched by an attractive couple as I strode by, totally cream crackered...
Posted by Simon Douglas Thompson at 11:06 No comments: 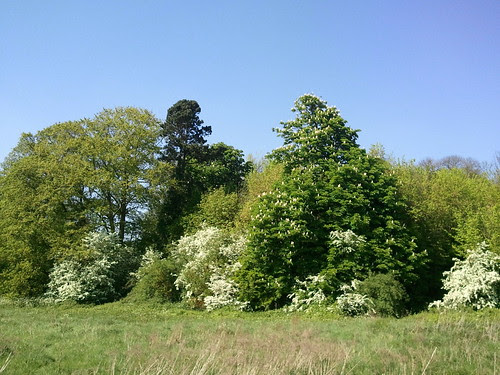 Nice stand of trees by Clay Lane - Conkers and I think Hawthorns?

Posted by Simon Douglas Thompson at 09:54 No comments:

Well I figured it was time to have a more in depth way to write about my incompetent wildlife adventures rather than annoying the notts wildlife twitter feed, so here it is!

In this blog I will post details of what I see as I run and cycle around the town, taking in the surprisingly accessible countryside I find round here. I make no apologies, this is going to be a perhaps slightly more, er, robust, blog than perhaps the average nature one might be. St Francis I am not. But I enjoy getting out there, and maybe, just maybe, some folk may enjoy this blog, and maybe walk the routes I have gone to, and most likely correctly identify whatever bird or butterfly it is I have misreported as a Steppe Eagle or Giant Swallowtail or whatever.

For careering is what I do, in the sense of blundering as I run, and in a shamelessly mercenary double pun, perhaps hopefully improving my chances of getting a more creative job than the rather...warehousy...one I currently have; and frankly my various fiction, scriptwriting, music journalism and just being me efforts would probably be regarded as 1) a bit adult and 2) the rantings of a madman. So read me kindly. I am trying.

OK, so where am I writing about?

Chiefly, I run around the area around Notts Wildlife's Beacon Hill urban reserve, out to Willow Holt in Farndon (if I'm Mo Farah, usually this is a bike job) and all sorts of lanes and paths you can find. On the bike, Langford RSPB reserve is in reach, although it is difficult to really get a good view here if you are hopeless hoi polloi like me, and various other little villages nearby off busy roads - I'm not Lance Armstrong.

So the day after I saw a Comma in my mother's garden and realised I had probably mistaken loads of the damn things for Small Tortoiseshells, lets give this a go and see where we end up! As you can see, low quality cameraphone pics may make an appearance, posing no threat to a good nights sleep for Simon King...
Posted by Simon Douglas Thompson at 12:30 No comments:

Email ThisBlogThis!Share to TwitterShare to FacebookShare to Pinterest
Labels: introduction 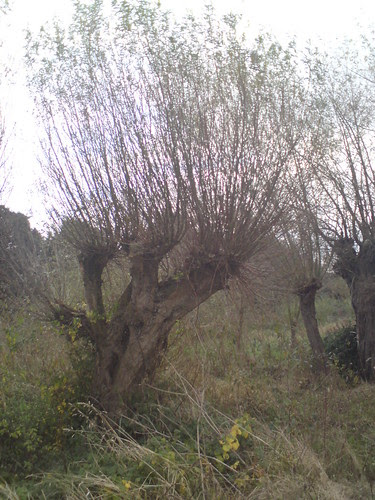 Posted by Simon Douglas Thompson at 12:09 No comments: