Well, that was hell, although it could have been worse.

There's nothing wrong with my puff, never felt even remotely out of breath and indeed kept chuntering along talking to Radio 4, until the advent of Any Questions, as I've mentioned before, meant I turned the radio onto 6 Music rather than thrown it into the Trent.

It was a tough, tough course, which would have been tough this time of year in the dry, let along after a wet November. I would say that 80% of the route was off road, and an awful lot of that off road was through mud!

The first lap went fine, and although tucked towards the back of the field, I kept in touch with a group of runners and kept myself going by nibbling jelly babies and carob energy bars given to me by the enthusiastic, if no doubt shivering wet and cold marshalls. But my various muscular niggles and sciatica began kicking in after about 7 miles and towards the end of the second loop of the muddiest, grimmest section of the route I was nearly bent double and so tempted to bale after the first lap - which would have been a half marathon - I had to all but yell at myself to keep going.

But after necking many pills on the curious 100 metre section the council insisted we had to walk on, I began to forget my back a little and keep on trotting in, slower and slower, but still running. And that's how I carried on, for the next two hours, eating sweeties and drinking energy drinks, but it was by now a very lonely run; indeed by the time I got on to the final loop of mud, I could see that I was a kilometre behind those ahead, and a kilometre ahead of those behind.

At one point I thought I'd just make 5 hours, but in the end I couldn't give a damn and just trotted round to get 5 hours 14. It'll do nicely, but I wouldn't recommend a rookie like me to run on that course, it is very very tough and more of a cross country trail run than a road race.

All text and images copyright CreamCrackeredNature 28.11.15

In the Glare of Flare

One thing that I've noticed my new camera doesn't do, is deal with the sun very well. Or rather, it does, but not in a fun way. It just puts a thick, bright line or arc straight through the shot.

My wonky old Motorola mobile phone camera, however, is far and rather groovier.  The faintest glimpse of a low sun, especially in this example taken on Beacon Hill Reserve, and a psychedelic wormhole to another universe opens up, there on the screen before you. 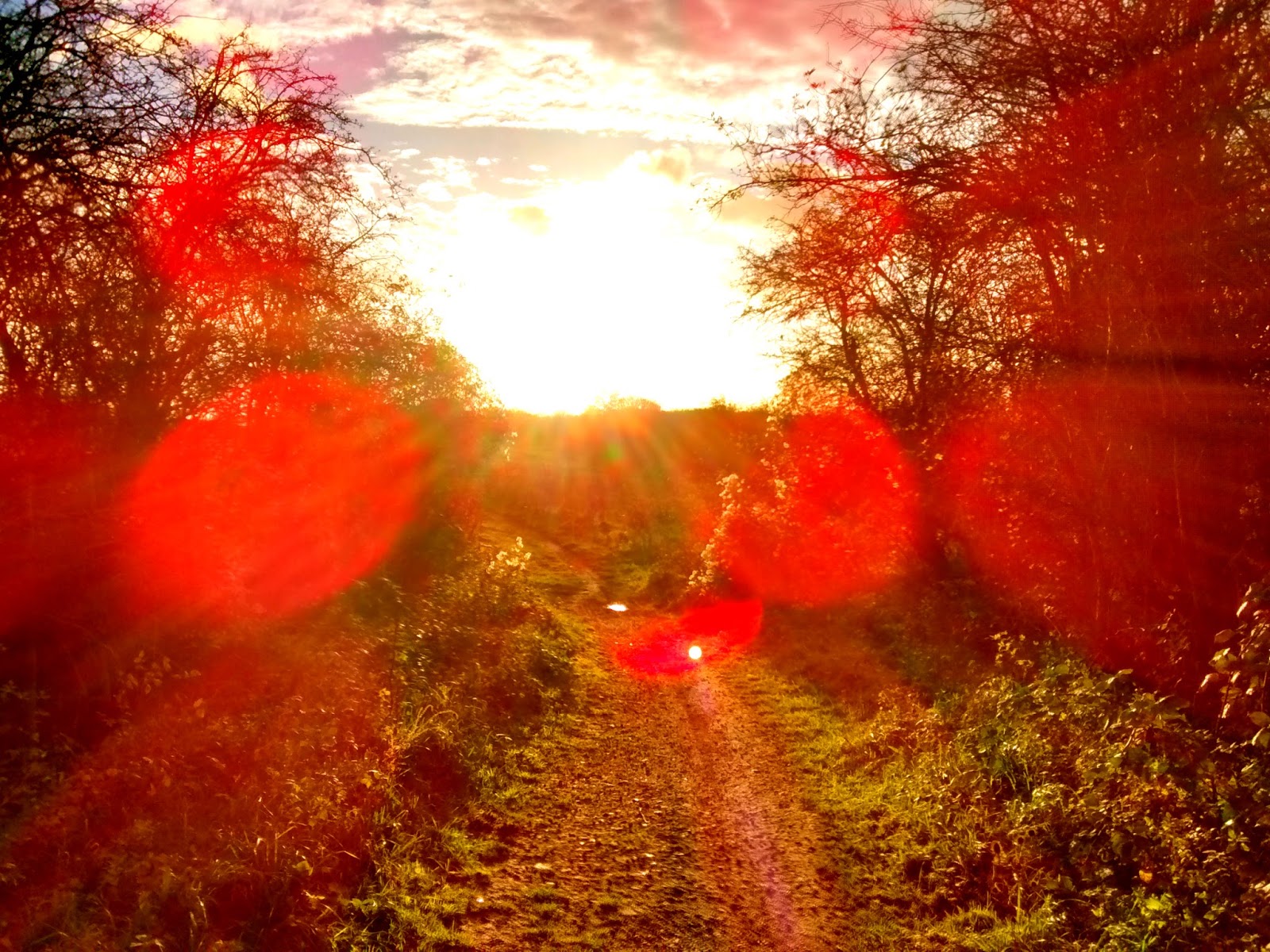 What I'm actually doing is preparing for my marathon run tomorrow; by preparation I mean emptying my mind and doing nothing at all that might harm my body. Like moving.

We will see how I go.

All text and images copyright CreamCrackeredNature 27.11.15

Took these yesterday as well on Clay Lane park, but I thought I'd avoid overloading my previous post, and present them separately for you here.

They are only house sparrows, but I need to practice and these are my best songbird shots I've yet taken. No brilliant colours, and the song of an angry fishwife, but they still have character, and they are still worthy of showing to you!

All text and images copyright CreamCrackeredNature 26.11.15 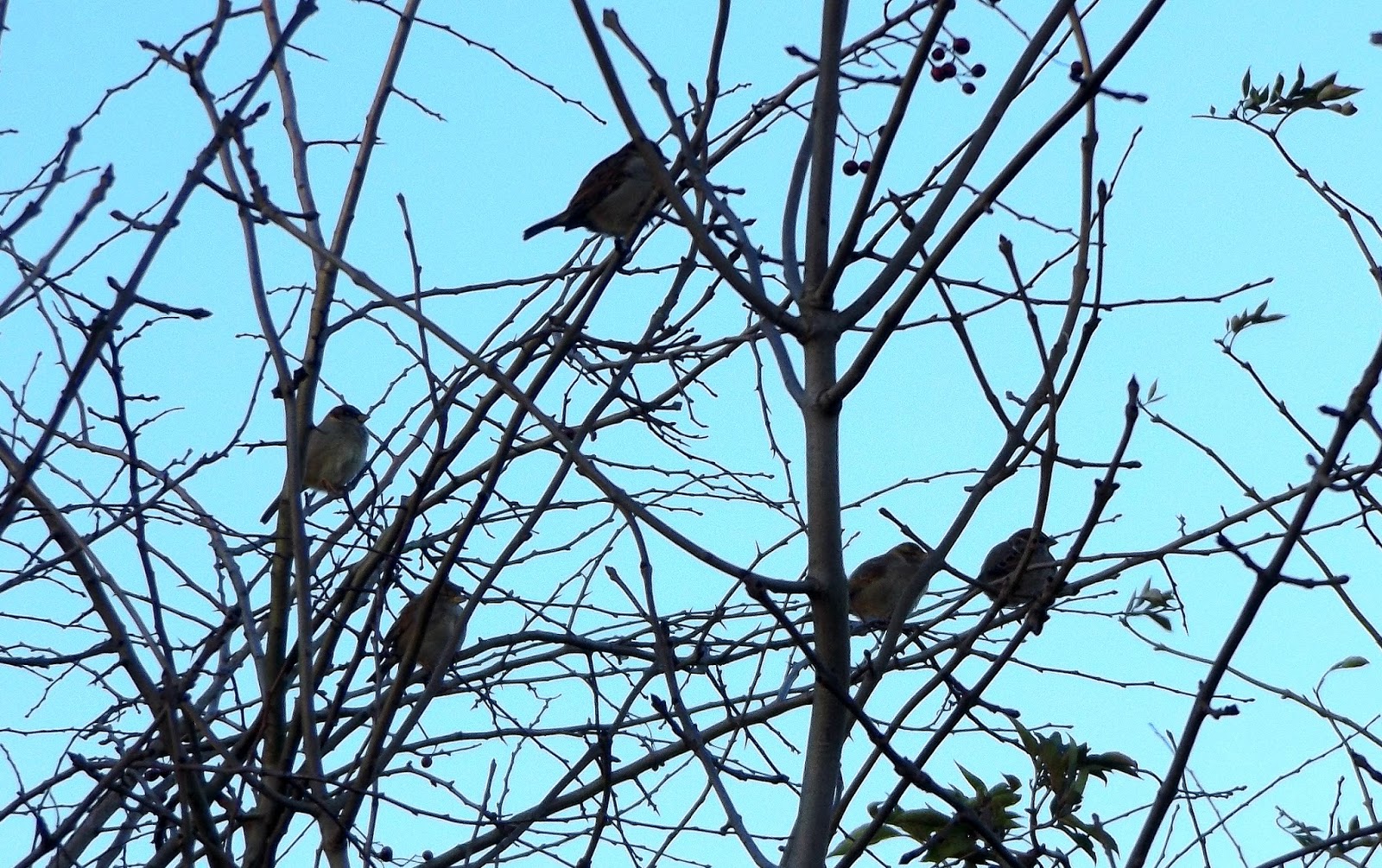 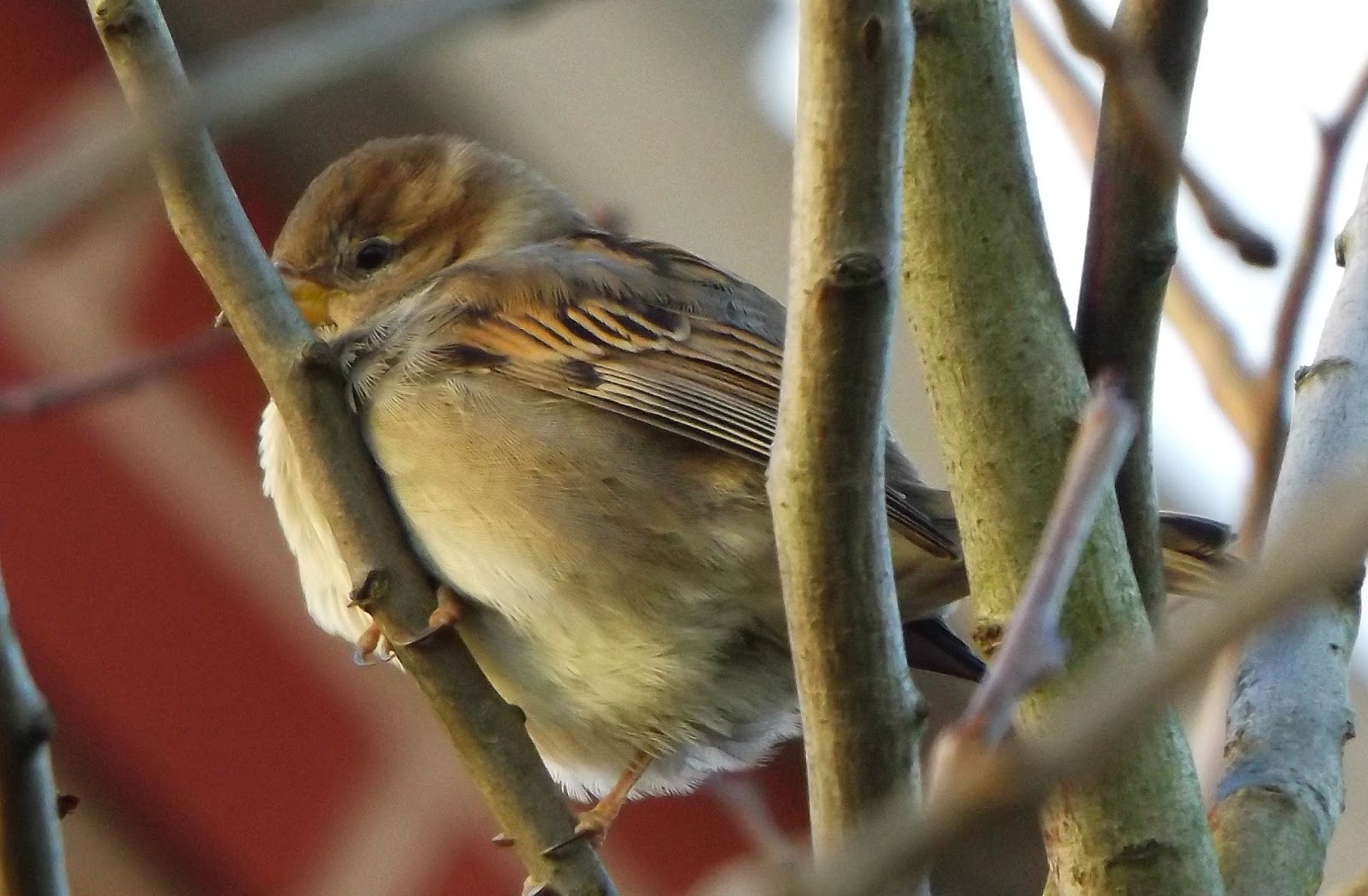 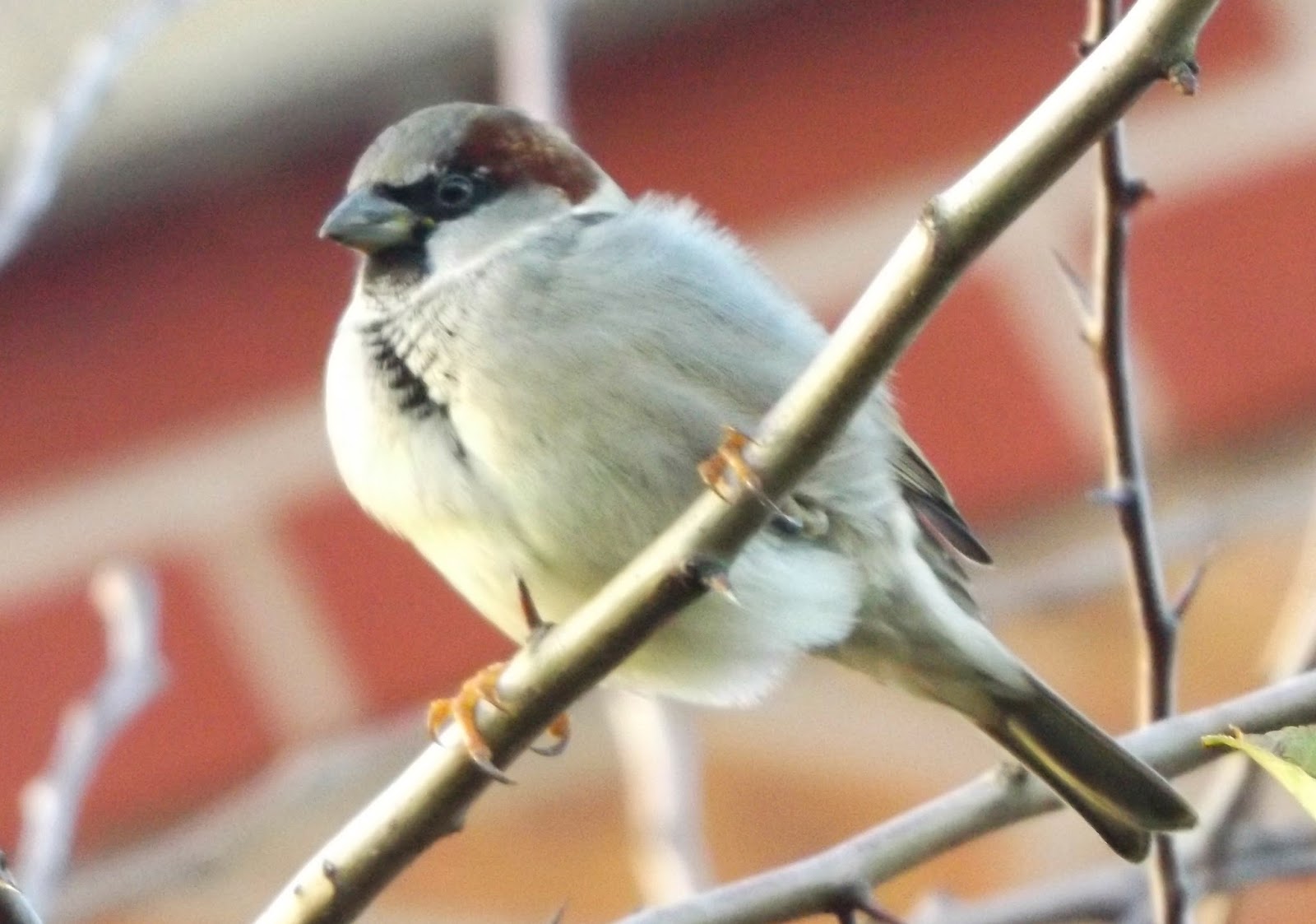 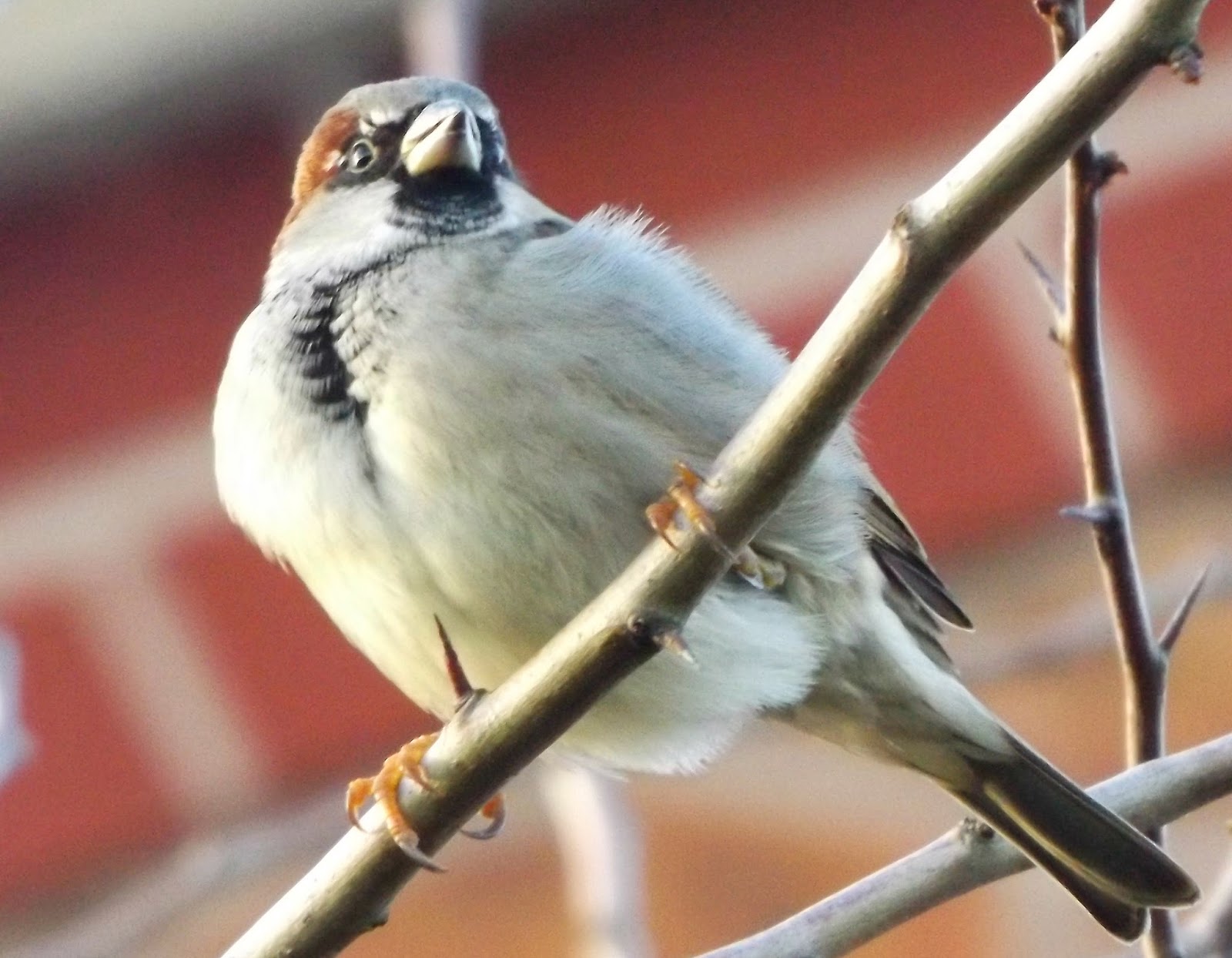 Beacon Hill Reserve Under the Sun

I was out earlier today, albeit not as early as I would like as I found Radio 4 Extra's output this morning really engrossing - plays about Scott's Antarctic expedition and the artist who painted the Nuremberg trials - but the afternoon still had plenty of light in it as I struck out on my walk.

I ended up walking for two hours past London Road Lake, then up to the reserve at Beacon Hill dressed for winter, and so feeling rather stuffy as it was a mild day. Long tailed tits were abundant, and abundantly annoying as they failed to let me photograph them. High overhead there were lots of flocks of finches on the move, probably goldfinches flying about the treetops in flocks of twenty or so.

Lots of people were out walking dogs, cycling and running. Me I was doglless, bikeless and trainerless. I was taking it slowly, trying not to hurt anything before the marathon. Too bad my back is still sciatically twingey. This is a bit of a worry!

I have bought my race nutrition however. No energy gels or nutri bars for me. I've bough two bottles of Asda own brand isotonic drinks and jelly beans.

All text and images copyright CreamCrackeredNature 25.11.15

It's my fault. After a morning pottering around and getting a more aerodynamic haircut for my marathon, I spent too much time watching my 99p Oxfam purchase of "The Poseidon Adventure" chortling over the hilarious over the top characterisation. So my afternoon walk started after 330pm, with the invisible sun now lifting up the duvet of the horizon prior to getting in to bed.

Still, I enjoy walking by twilight, it seems a little more peaceful, so I decided to head down to London Road Lake to see what was about, under a beautifully burnished sky.

Sadly there's still no winter ducks about, and even the tufted ducks seem to be on holiday from local waters, so it was just the usual water traffic of mallards. coot, moorhen, and the usual elusive great crested grebes. But the light was so dim by this point, the camera just couldn't handle the light, and results were mainly disappointing.

However, this does mean that it means I get more practice on my Pixlr photo-editing app on my Chromebook; pity it crashes the machine more often than Evil Knievel. I love this little machine - great purchase for £129, but with only 2 GB RAM it can struggle a bit.

People of Newark know when I'm editing with it, as they can hear my howls of frustration all over town.

All text and images copyright CreamCrackeredNature 24.11.15

Well today was far better, I got out of the house much earlier, and freezing though the day was, the wind had dropped and the two hour walk I had was most pleasant.

I ambled by the lake and photographed the mature and juvenile black headed gulls, admiring the subtle differences between each birds head and wing markings. A young looking heron was strangely sat in the field at the back of Grange Road, while long tailed tits zupped through the hedgerow, again avoiding my camera.

Same for the great tits a little further along.

Sadly although winter berries were plentiful, there were no winter thrushes to be seen eating them. Instead it was chacking blackbirds scolding me as I walked by, perhaps afraid I wanted to drive them away from their bounty.

Back into town, and I found goldfinches at a garden feeder! At last, good shots of a pretty songbird!

But the most memorable bird I encountered was a very noisy gull of some kind - a yellow bill making me think it is a common gull - strutting around making a tremendous racket on the Sconce playing field. "Yark!!!" it kept crying, reminding me of Kehaar the gill from Watership Down. Which is ironic really as Kehaar was a black-headed gull, but they are all as quiet as mice.

I had a rabbit called Captain Campion. Nicked his name from Watership Down. Makes a change from Bigwig.

All text and images copyright CreamCrackeredNature 23.11.15