Life Among the Thistles at Beacon Hill Park

Ran rather gingerly, still rather stiff ankle and sore back from doing...sleeping! It was warm, and life was out in abundance by 4pm.

The hill between Clay Lane and Beacon Hill was lively enough as it was, but the main meadow at Beacon Hill Park was so alive with  butterflies I'm surprised it didn't lift off into the blue sky.

The reason is, I suspect, that the thistles have come into flower up here, and a touch of rain followed by warm weather has caused all the plant life to shoot up like Jack's Beanstalk on steroids. Certainly the meadow browns and a few small tortoiseshell butterflies, and some burnet moths, are loving it.

The meadow browns especially, are practically forming clouds when you disturb them as you run past. They and the other grassland species of summer, the ringlet and the large skipper, are having a fantastic season.

Also very noticeable are the red soldier beetles, patrolling the flower heads looking for smaller insects to chomp on.

How much life the thistles attract. Hopefully soon, they will be out in force by the Devon, to bring in the small coppers and the common blues in Sconce Park.

Posted by Simon Douglas Thompson at 11:56 No comments:

Front door and my sycamore tree proving attractive to ladybirds at the moment, but herein lies a tale. Most of the ladybirds I'm seeing are the invasive harlequins, large, agressive ladybirds that feed off our native species.

They have suddenly appeared in lage numbers, emerging from their larval forms - the sycamore leaves are covered in these - to feed off the huge number of aphids present. Thus they out-compete the native ladybirds they don't actually eat.

And this is why I'm just about seeing more harlequins than any other species at the moment, when a few years ago, the native 7 spot was probably most numerous.

Posted by Simon Douglas Thompson at 11:09 No comments:

As I dropped in for my usual tea and scone, I was delighted to see this in the counter; 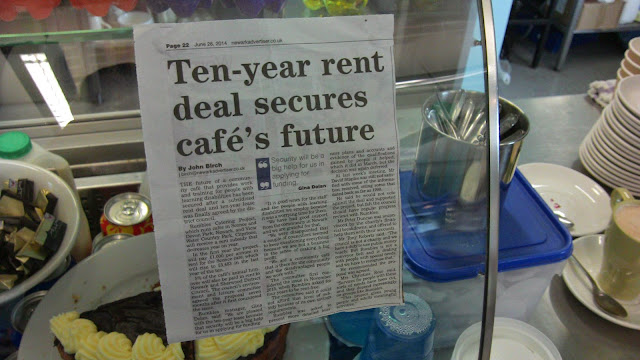 Basically the story is that Rumbles Cafe has secured a ten year deal on its subsidised rent, enabling them to carry on offering employment opportunities to folk with learning disabilities, and reasonably priced food and drink to families (and passing through butterfly hunters) using the park.

Although the amount of rent the cafe pays will go up as the ten year period goes on, and the council wants to see somee better returns for their investment, it has been crucially recognised that a cafe offering a chance for less abled folk a chance to earn a living is not going to be a financial "production line".

Certainly the staff I spoke to were thrilled that the cafe was going to be able to keep going as was, and that is the most important thing.

Posted by Simon Douglas Thompson at 11:41 No comments:

A random selection of Newarkalia

Posted by Simon Douglas Thompson at 15:06 No comments:

Yet Another Newark Photographic Miscellania

Walking, running and cycling, this is what I see.

Posted by Simon Douglas Thompson at 14:12 No comments:

The Erosion of Wild Space in Newark

It isn't just me that noticed it. All of a sudden, as you entered the Beacon Hill reserve, a great chaotic mass of metal link fencing appeared on the fallow farmer's field next to the path.

We didn't really pay much attention to it at the time; perhaps the farmer was just fencing an area off prior to planting it. But then one day, the JCBs turned up, and turned the field into a scene of destruction not even Fiver from Watership Down could have envisaged. Half of the field is now a Somme like patch of mud, with a large pond sitting lifelessly in the middle after the heavy rains of early June.

The other half is as yet untouched, with a scrubby cover of wild weeds acting as a home for butterflies in summer, and chaffinches and brambling in winter. It's not amazingly pretty, but it's alive.

Not specifically sure what is going on up there, but a google search revealed plans for 2013 for a hundred or so homes to go up somewhere up on the Beacon Hill area, so it may relate to that. If true, that's another splotch of overpriced brick boxes to go with all the other ones we've got here. That'll make running along the reserve path feel a little hemmed in, to say the least.

Another site is that of the recently approved Newark “Sport's Hub”. I'd been told that there's a lot of bird and insect activity on this land, adjacent to the cemetery and the NSK Sport's ground, and when I ran through it today, it sported small heath, large skipper, meadow brown and small tortoiseshell butterflies, and the beautiful scarlet flashes of cinnabar moths in the dense long grass and plants. Has anyone done any wildlife impact surveys on the area, my friend wonders?

And then there is the demolished X2 connect site, which despite being next to the oily smelling railway line, is a colourful mass of ox eye daisies and dog rose that the bumblebees are delighting in. I suppose this too is marked out for more housing.

Oh I know this town needs developing, and there's always a need for new housing, and hey, we only have 46 supermarkets, and there's always a call for new nail bars and hairdressers. But sometimes we forget that is these wild, abandoned brownfield sites often offer a better home for nature than a lovely manicured lush green park, and perhaps we shouldn't be so quick to dismiss them.

Posted by Simon Douglas Thompson at 07:01 No comments:

Having felt terribly stuffy and oppressed at my unglamorous work today, it was a relief to get outside. My achilles is bothering me, so I couldn't really run, but like I wrote before, you miss a lot less when you walk!

It hasn't stopped my achilles from aching now though. Drat it, no Parkrun for me on Saturday.

Once again my route took me up the back of Beacon Hill, where the bees were going crazy for the bramble flowers, including a number of interloping hoverflies. One of these was huge, and was imitating a red tailed bumblebee. Apparently this species is volucella bombylans bombylans.

Whichever you say it, it's a mouthful.

Skipper butterflies were also about, but not keen on letting a tall hot and flustered creator of shadows get a picture. The same was true on Beacon Hill Park, where once again the blue cornflowers attracted them. Up in the main field, meadow browns of various colourations, and the first 6 spot burnet moth of the year, having seen the first swallowtail moth last night.

Sore ankle or not, I must do these school night walks more often. You just never know what you will find!

Posted by Simon Douglas Thompson at 14:34 No comments:

A Day of Discovery at Beacon Hill Park, Newark

My leg is crocked.

My right achilles is injured, so no running for me, and I was very disappointed to miss Parkrun this morning.

It is frustrating, and not running always makes me feel chubby and lazy. But, it is not going to stop me gettting out, it means that everything will be slower. And although it may not be calorie burning, going slower means you miss less.

And so it proved today.

As I headed up the back of Beacon Hill from Clay Lane, I  noticed a lot of insects fluttering about; meadow brown butterflies - but no ringlets as I've seen here in the past in large numbers - bumblebees, and a lot of the little beige, white and grey micro moths you always see skittering from stalk to stalk in the long grass. However I also noticed a striking, criss-cross marked "lep", an attractive cream colour with darker markings.

"Fritillary"!!! my mind screamed to itself excitedly. As I failed to photograph the first one, I noticed several more. Visions of congratulations from the local wildlife and butterfly bods flashed before me, as I was confirmed as the discoverer of the first colony of a rare butterfly colony in Nottinghamshire.

Sadly for my ego, a close look at its antennae revealed no bobbles. It was a day flying moth, a latticed heath as it turned out, an attractive summer moth of no great rarity.

So, I continued on through the estate onto Beacon Hill Estate, and hence to the reserve. I have decided the nursery is the best area to find things these days, and the back path through woodland to the soutern edge of the pasture. Blue cornflowers were out, attracting large skipper butterflies, and what I think may have been big vestal cuckoo bumblebees judging by the absence of pollen basket and the lemon curd coloured edging to the abdomen.

Further round the nursery, ringlet butterflies per usual did their teasing refusal to be photographed.

But it was up on the main pasture I had my other discovery, as I stalked a lemon yellow day flying moth. After another failed photo op, I looked at my feet, to find some bee orchids looking up at me.

My first bee orchids! My first orchids at all in fact. And I had no idea there were any on Beacon Hill Reserve. A well named species, who's bee mimicking flower tricks male bees into pollinating it. But it didn't fool me.

Posted by Simon Douglas Thompson at 13:41 No comments:

And now summer arrives in Newark

After a cool and wet couple of for me to finally have warm sun outside, rather than being sweltered to death at work, was a delight I determined to make the most of.

Alas, a puncture on my rear tyre for the 13,000th time scuppered a bike ride, but this turned out to be lucky. Instead I walked across the cemetery, through the sports hub site, across the estate to Sconce and Devon Park. Later on I got in a run to Beacon Hill Reserve.

You can see below what I saw on my day's travels. Highlight was the large skipper I photographed, possibly my best ever mobile phone photo. But many butterflies I was too dim witted and slow to snap were up too.

As well as the aforementioned skipper, I had my first sightings this year of red admiral, meadow brown, and ringlet. A second flight small tortoiseshell put in an appearance too, above the poppies on the sports hub site.

Finally, I was delighted to watch at close quarters - 2 metres - a song thrush put on a snail demolition for me. Once it realised I wasn't going to pinch its lunch and eat it in a garlic butter sauce, the thrush gave it four quick smashes on the tarmac path before wolfing down the tasty bit.

It had flown off long before the shell stopped spinning down the road.

Posted by Simon Douglas Thompson at 10:57 No comments: