With a couple of days to go before I have to return to work after my time off, I was leaving an establishment of doubtful virtue long after pumpkin time, when I was confronted by a pair of eyes glowing in the dark near HSBC, attached to a curious yet fearless head, russet body and a bushy tail.

It was of course a fox, and evidently one used to presence of humans. She sat perfectly still, looking up at me, as I took picture after picture of her. Only for me to realise that for some reason related to seer idiocy, I'd have the cameraphone on "film" setting, and had produced noting but a series of short films of dark paving slabs.

As soon as I had got the phone onto the right setting, the fox trotted up towards Bridge Street and disappeared. I stood there cursing myself to the skies for not being able to record such a close vulpine encounter - the fox was barely three metres away from me.

I decided to follow the fox to Bridge Street thinking it would be long gone. But as I turned the corner, there it was, sat munching away on what looked like a Babybel wrapper with an audible crunching sound.

It being a quiet Tuesday, there were fewer people around, but likewise there was a corresponding lack of fast food goodies overflowing from bins for hungry foxes. Barely able to breathe, I crept closer, taking a few pictures with the flash on, and the fox again took itself off. I decided from the state of the brush that it was a vixen, slightly on the thin side but otherwise in good condition.

She was also very peckish, as rather than heading to the churchyard where I presume her den was, she trotted back along the bollards before sidling up alongside the chemists shop before investigating a plastic drinking straw next to another bin.

By this time, she was barely a metre and a half away. Done with crunching on the straw, she found some other litter to nibble at, before slouching off round the corner onto Cartergate. I followed her round, and she decided to trot back into the market square again. I left her at that point to carry on her feeding activities.

In all, I think I must have watched her for around 10 minutes, and felt very privileged to have had the fates grant me this encounter. 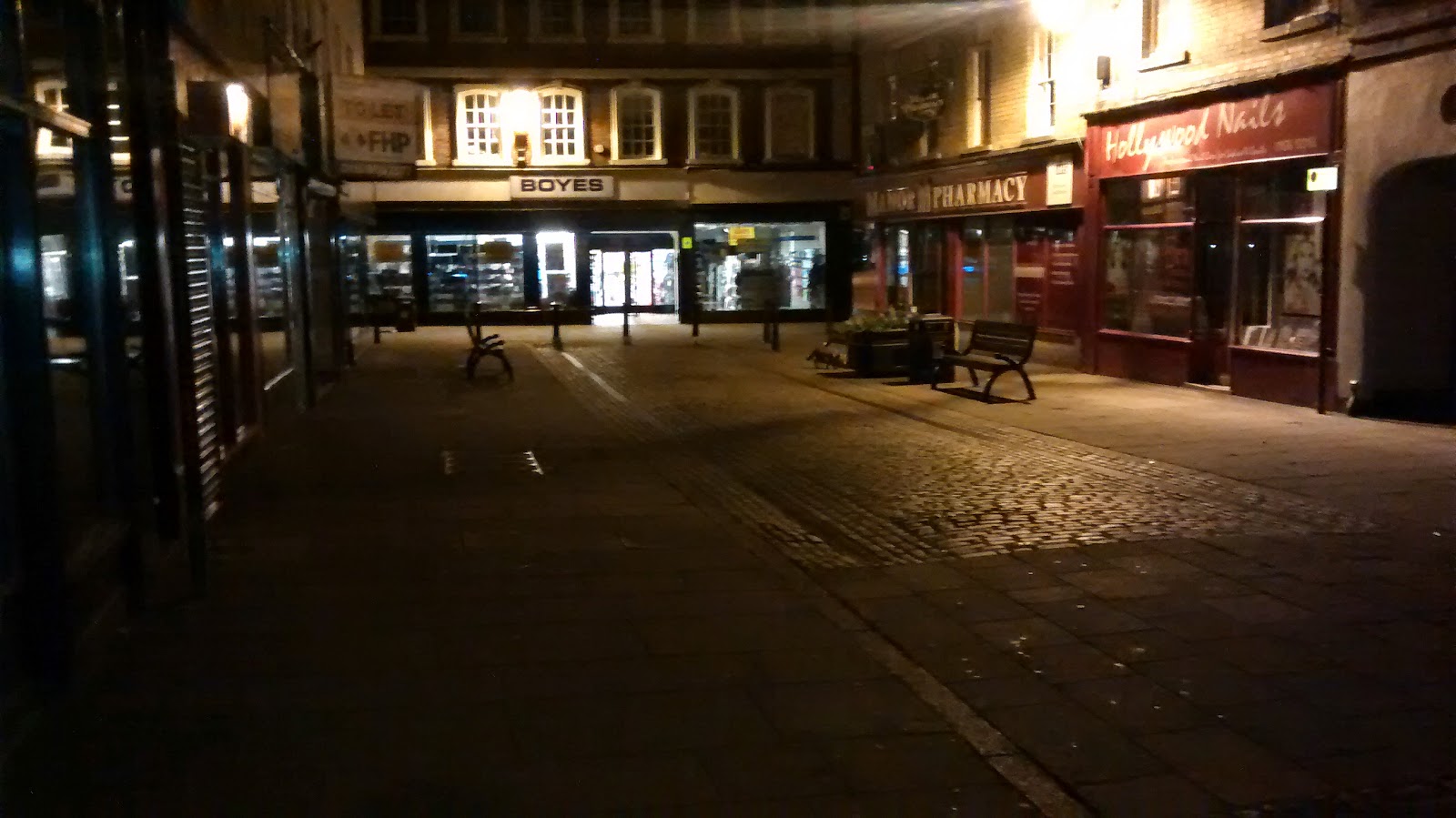 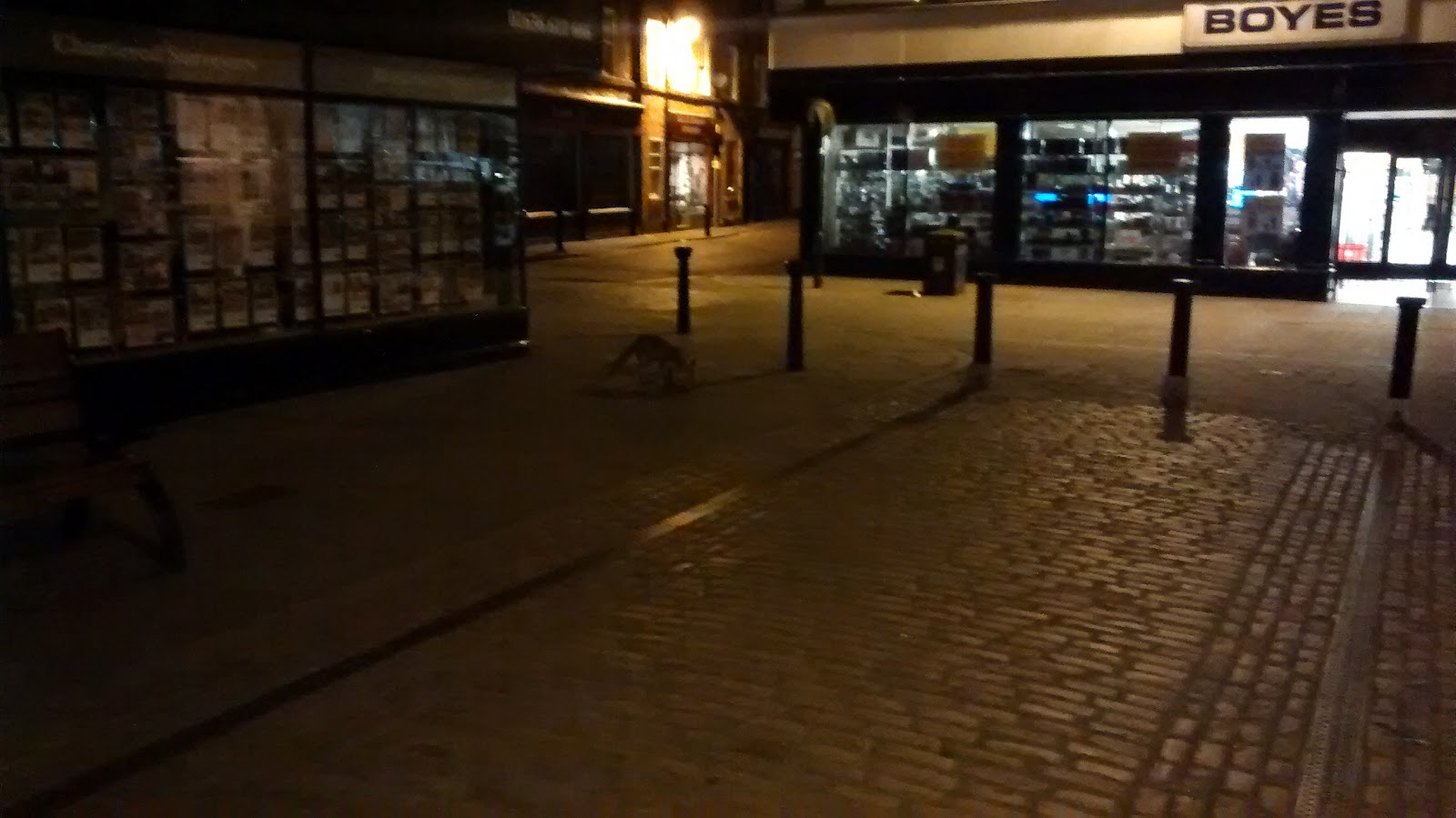 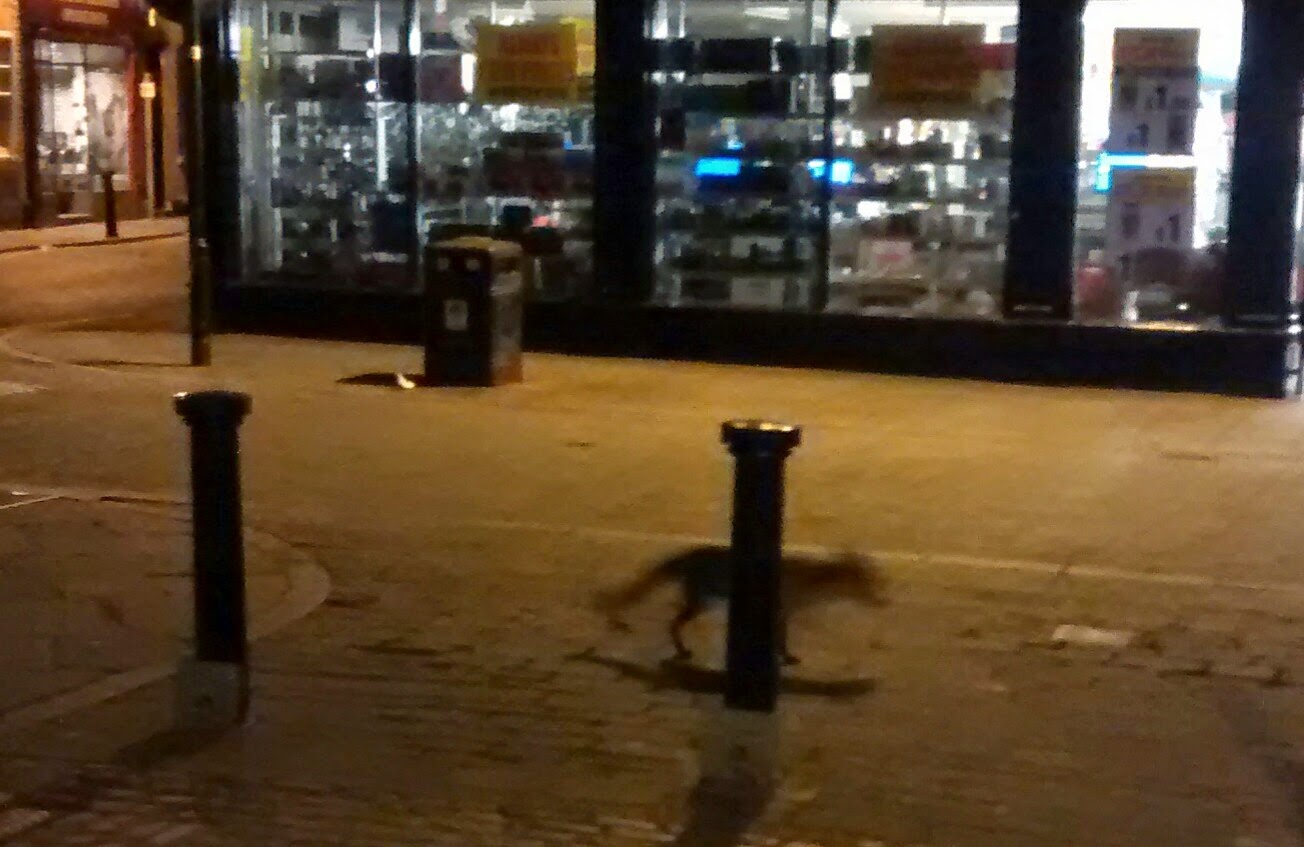 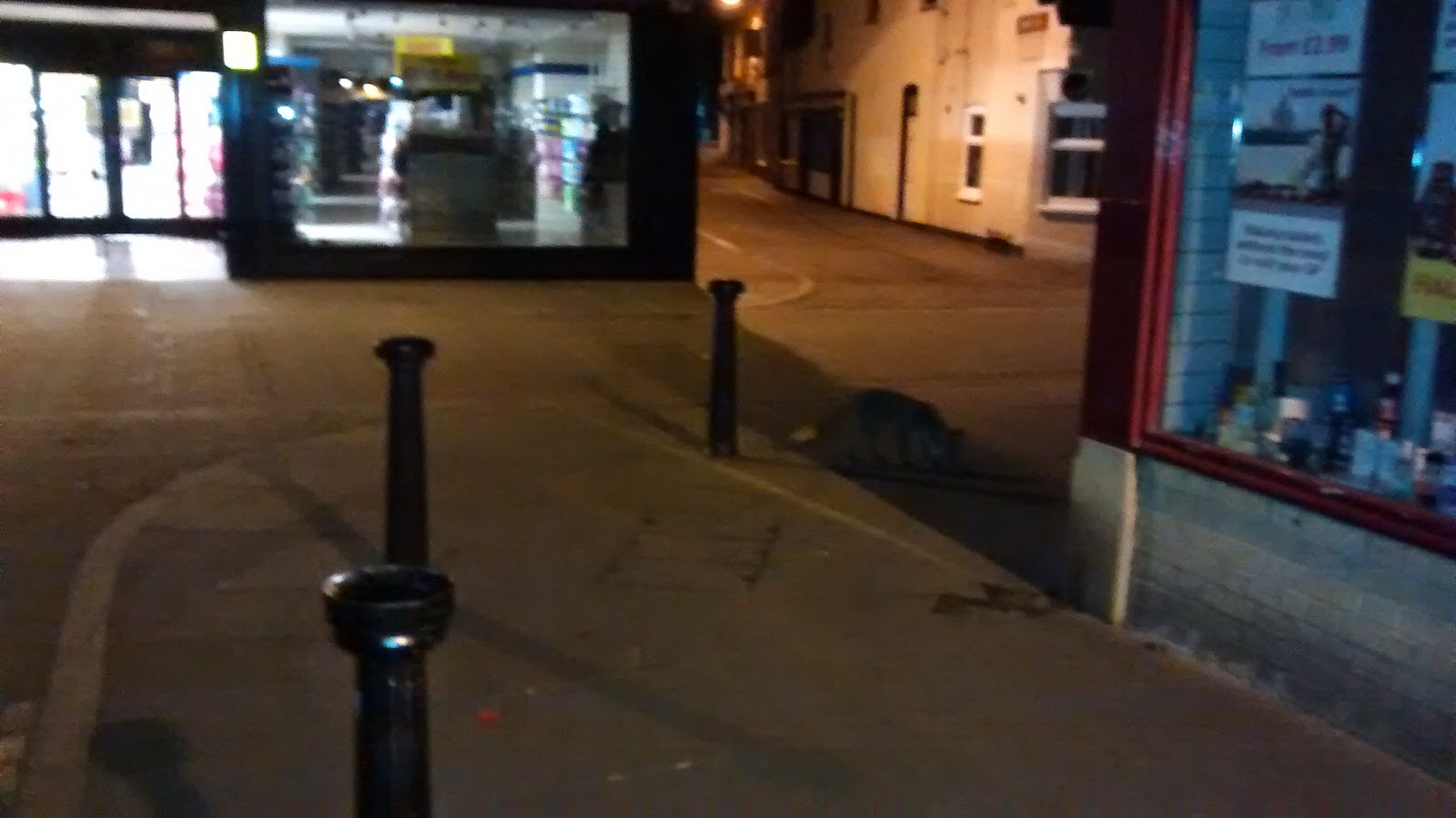 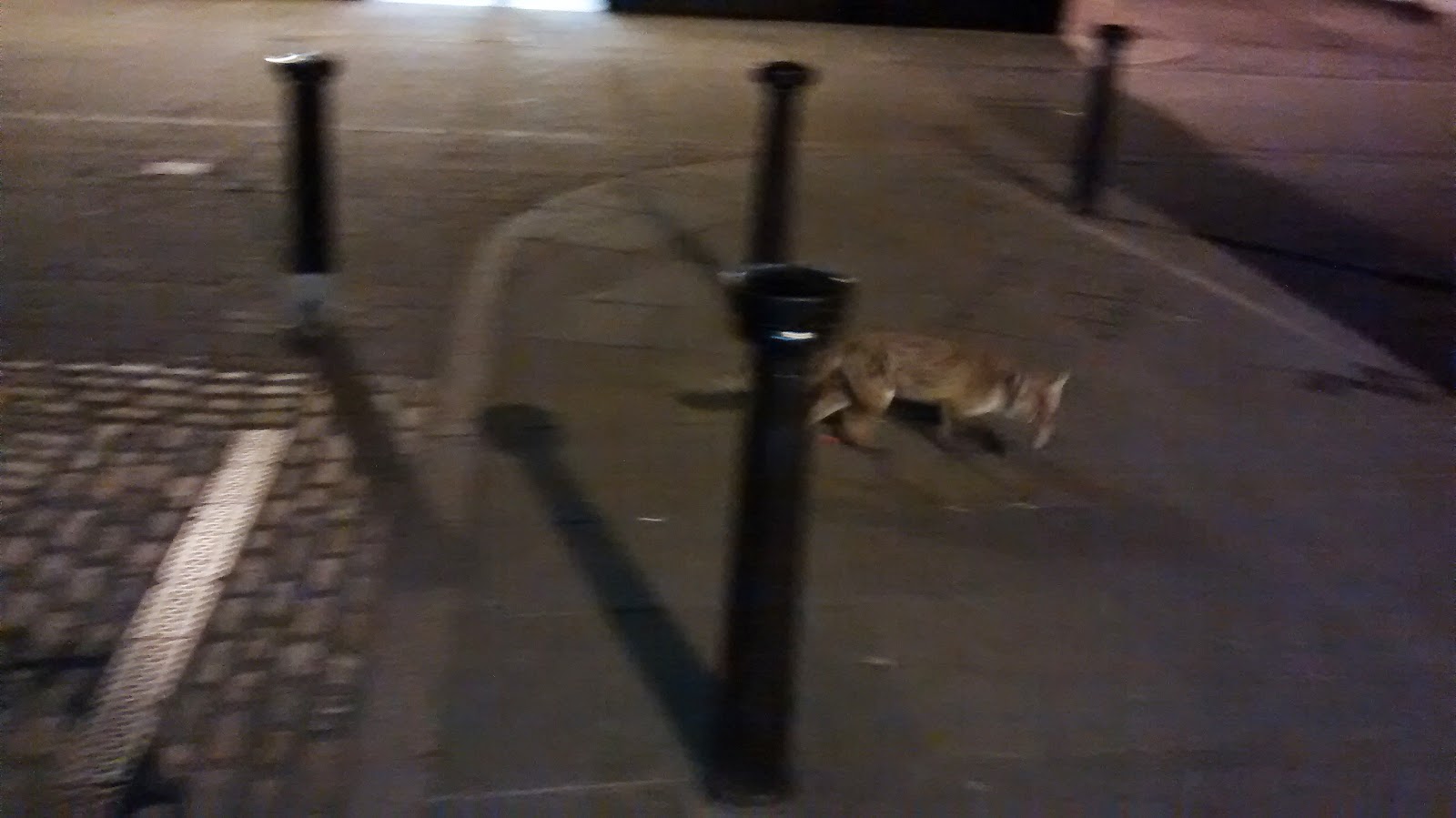 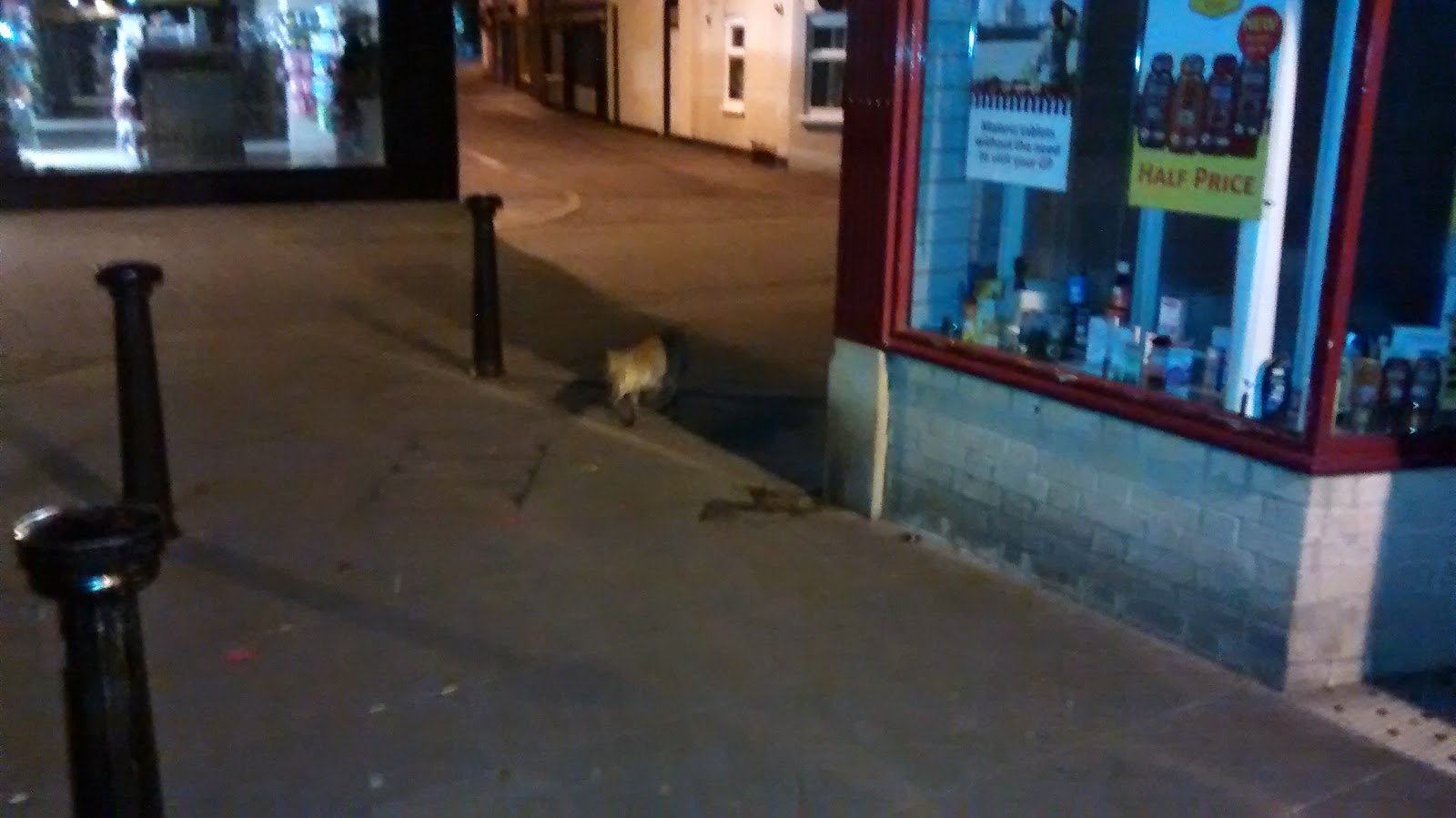 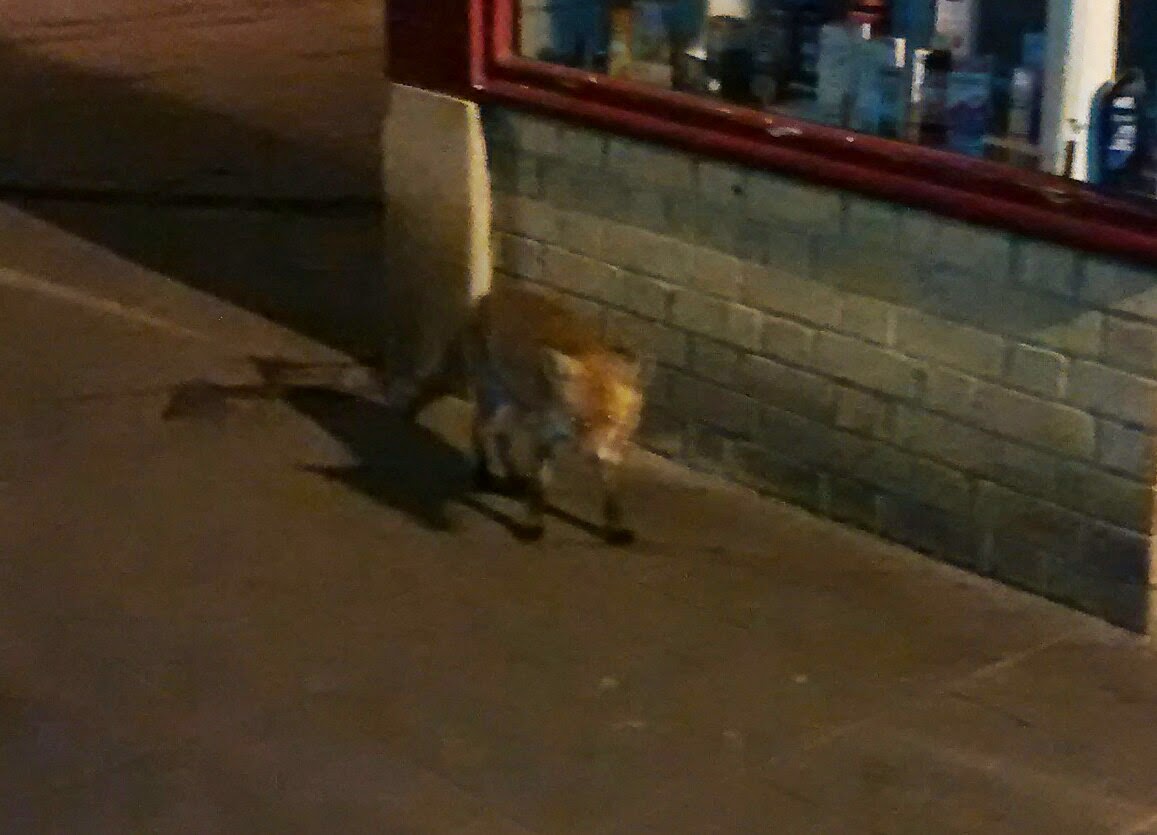 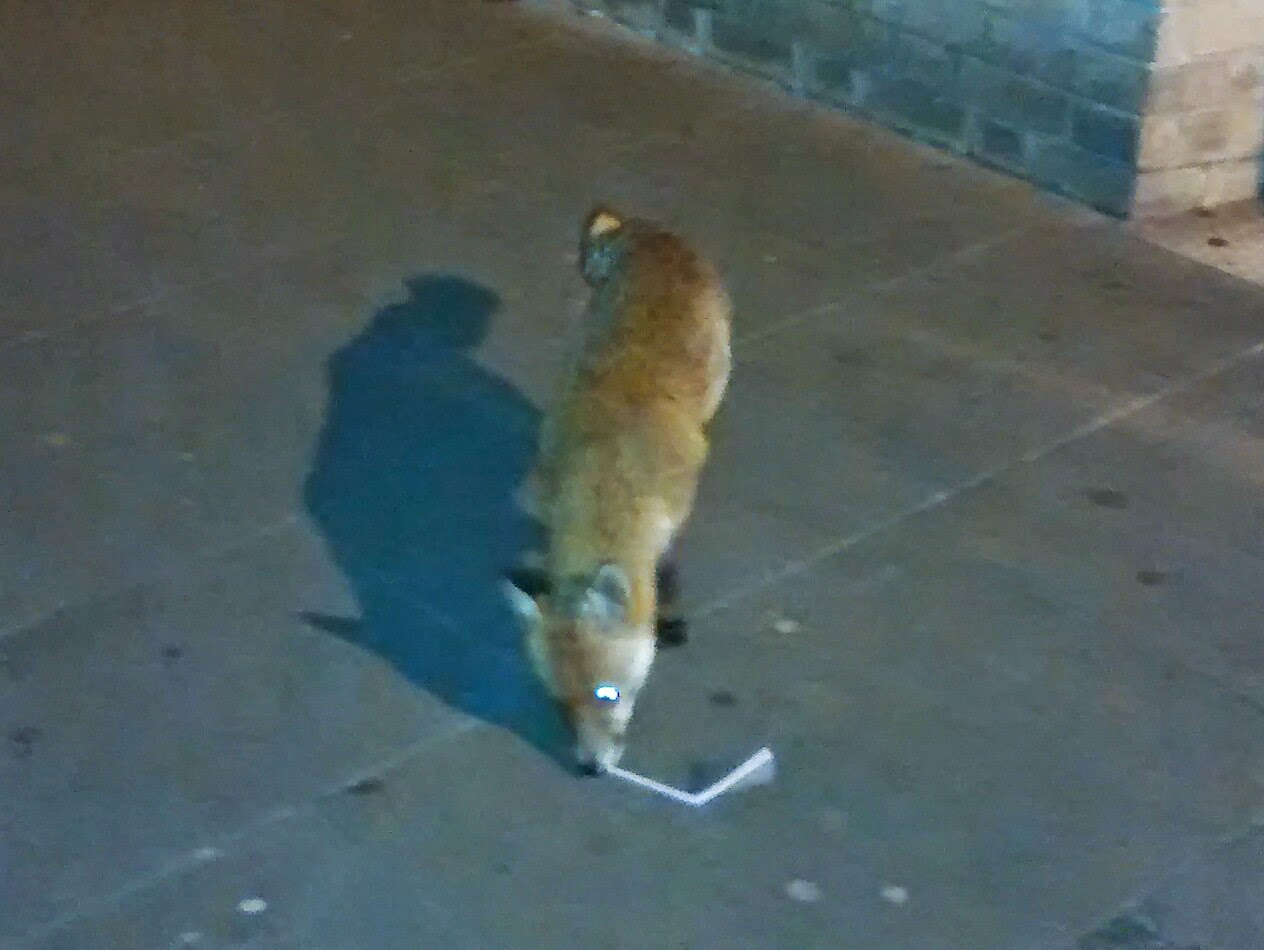 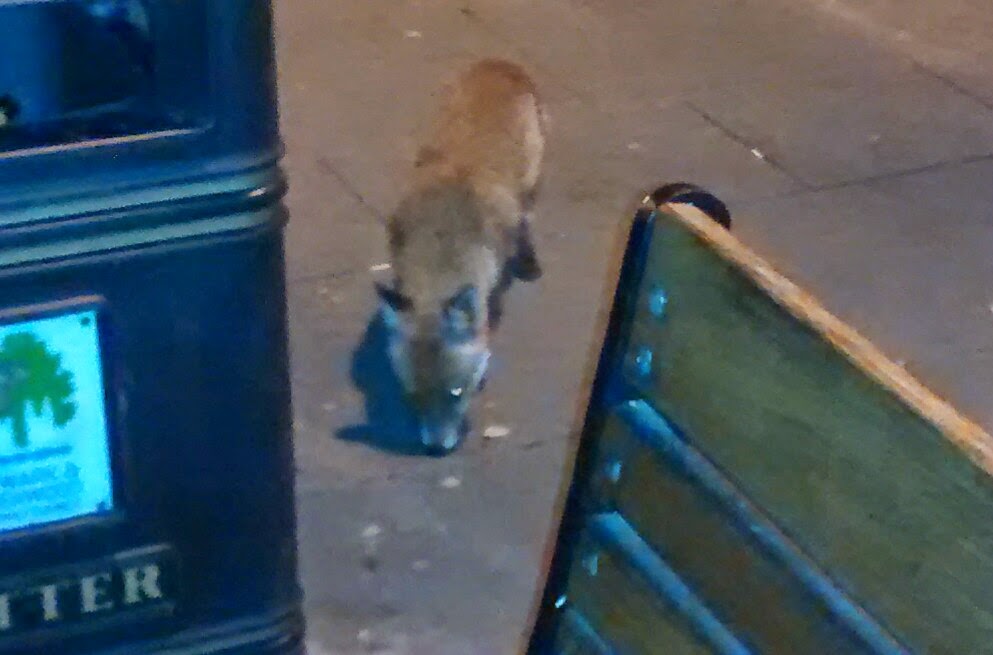 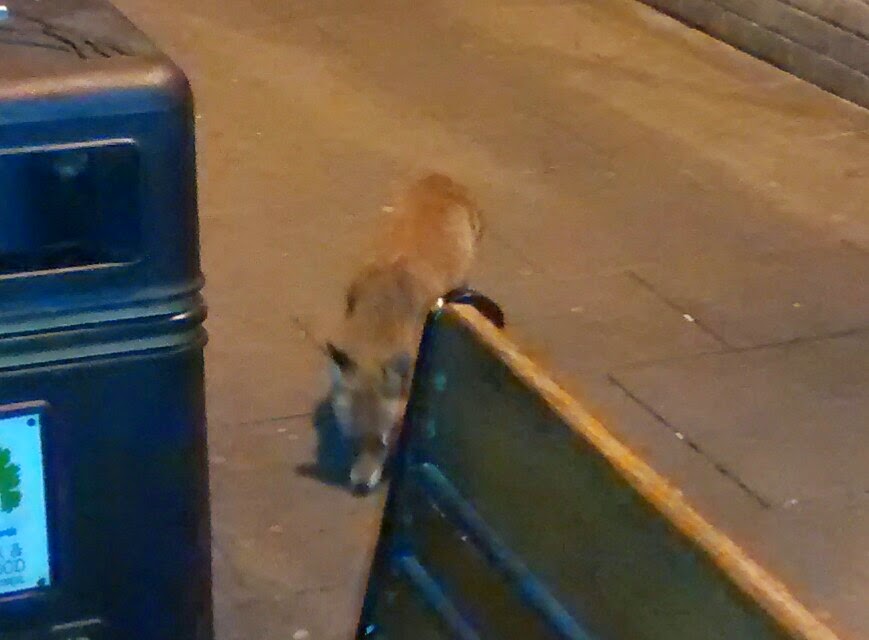 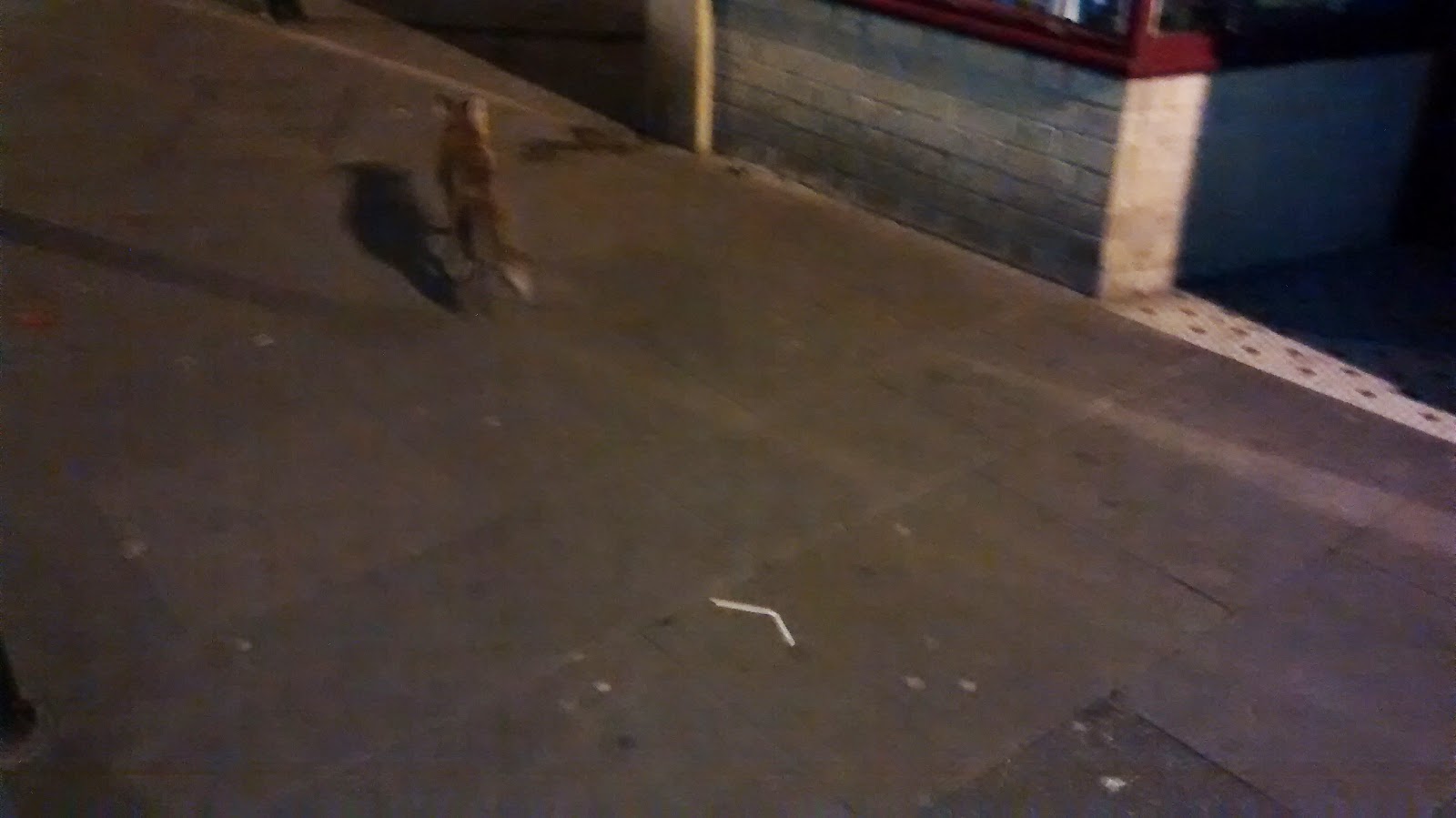 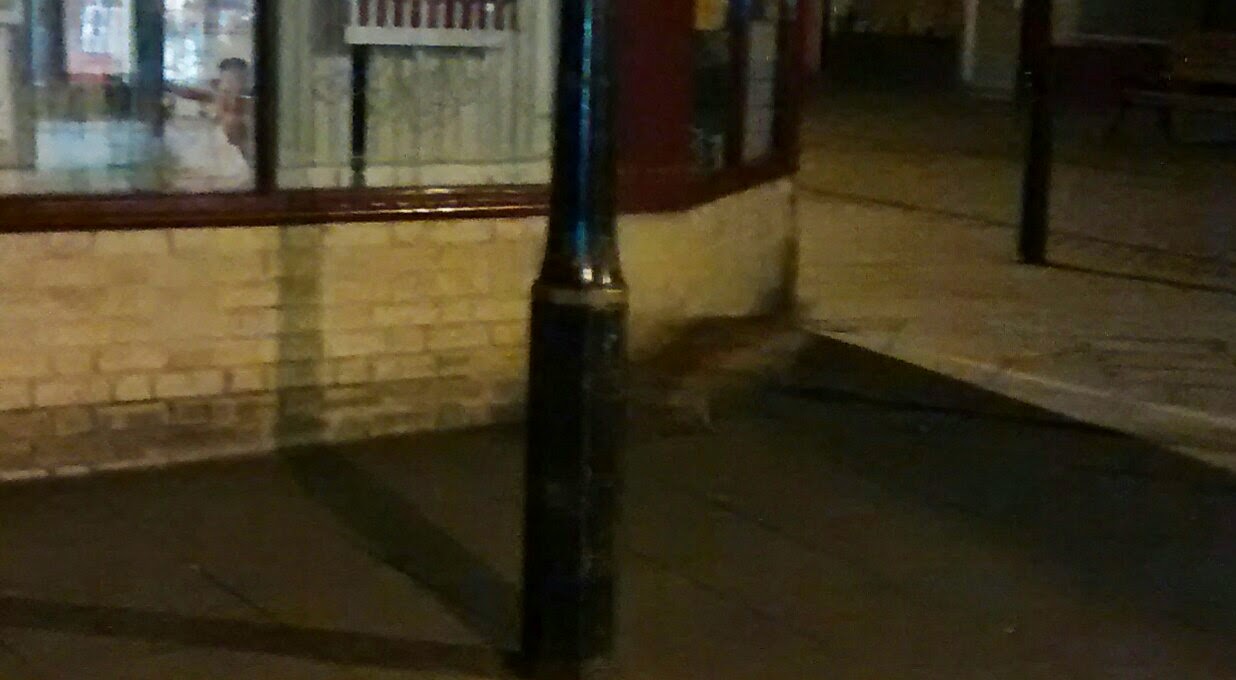 Posted by Simon Douglas Thompson at 12:26