I'm no photographer, or rather, I have no means of taking nice action photographs at the moment, and one of the most photogenic and characterful birds of the winter is the pied wagail.

Unmissable in market squares, supermarket car parks and similar urban locations during the day, and roosting in some sites in their hundreds by night. Their tail strutting little walk is umistakable for anything else, but it is their buoyant undulating flight that always gets my attention.

Flying is an energy burning necessity to birds, one that especially small passerines would not do for mere pleasure. But there is something about the pied wagtail that makes you think the bird takes some enjoyment in it. It takes off with a piping little "peep!" and then as it reaches the top of each "wave" in its flight emits a cheerful "Peep-peep!" It flies like a paper toy being pulled on a string, a child's streamer with a long tail bobbing in the breeze.

With no camera up to the job, I characterise its flight through the medium of interpretive art. 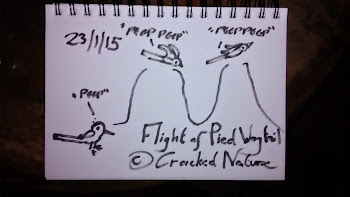 posted from Bloggeroid
Posted by Simon Douglas Thompson at 11:35