So, it has been a busy old day, in the night sky.

I've been doing a lot of walking today, two of an hour duration each. On my second one, after the sun had set after a long day shining but not warming anything up in the slightest, I noticed Venus shining above the rooftops of the sheltered housing on Balderton Gate.

I gave my eyes a moment to adjust, and lo and behold, there was Mercury, looking slightly pinkish against the twilight, and considerably fainter than "the planet of love". It is only the second time I've ever seen it, and I was feeling rather proud of myself. It always makes me think of the beautiful transit sequence in the movie "Sunshine".

You can't see Mercury in the below mobile phone image, but it was at 3 o'clock from Venus about 3-4 degrees away. 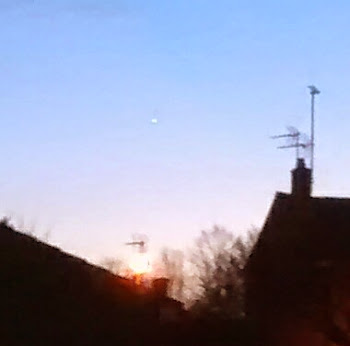 After the sun had set, it was time for the sky to darken sufficient for Comet Lovejoy to be seen. I have had two looks at the comet again, and once again the sky is clear enough for it to be a just visible naked eye object with averted vision.

In 10x50s the comet is barely out of the same field of view, WSW of the Pleiades cluster. Tonight, the condensed nucleus, and elongated teardrop coma were clear, and my eyes were trying to convince me there were hints of a tail.

It's always such a danger, trying to convince yourself you are seeing things you expect or want to see. The same thing happened later on, when I wondered if I was picking up Barnard's loop around Orion on the binoculars.

Aside from Comet Lovejoy, what I did definitively see was a lovely starry night. Starfields around Monoceros and Orion were beautiful - I saw all three of the main Monoceros clusters; The Christmas Tree, the Rosette and Messier 50, and all three Auriga Messier clusters.

The night is yet young, so there's plenty of time for everyone to take a look up, optically aided or naked eye. It truly is beautiful up there.

Posted by Simon Douglas Thompson at 13:51