The Philae Lander has Awoken!

Back in November, I wrote with sad eyes slightly shining, of how the Philae lander carried to Comet 67P by the European Space Agency Rosetta mission had finally run out of power after its landing on the comet's surface.

It had apparently settled in a dark ditch upon the surface, and was thus unable to properly recharge its batteries with its solar panels. After 60 hours of activity, the much anthropomorphised "plucky" little spacecraft finally went to sleep as its batteries dies, tweeting heroically all the while.

Here's what I wrote at the time.

But now, I read that the ESA have made contact with Philae again. As was hoped at the time - rather optimistically, I thought - the decreasing distance of the comet to the sun as it approaches perihelion has meant that the lander is now getting enough sunlight to charge its batteries and operate.

There is now the chance that we will see for the first time what happens on a comet's surface as a comet makes its closest approach to the sun, which could make for a heck of a spectacle as volatile gases erupt off the warming surface to form jets, and other material streams out to form the cometary tail.

But never mind the science, not when today's evens have given the ESA an opportunity to produce another cute cartoon! 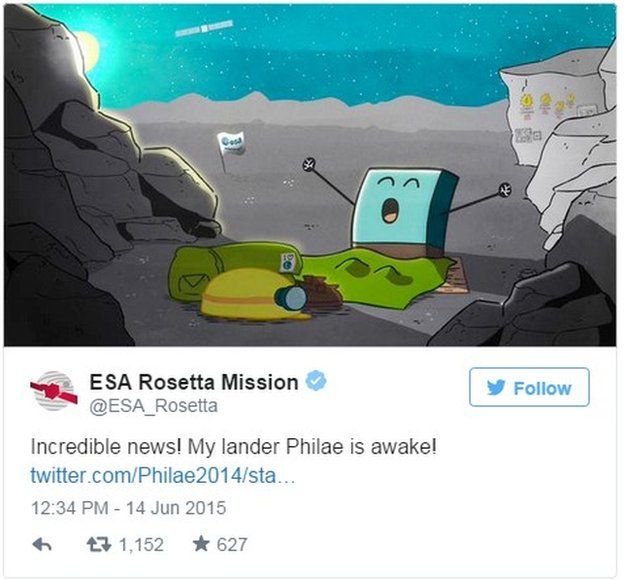 Posted by Simon Douglas Thompson at 07:19