Night before last, as I was undertaking a quick survey of the night sky before heading for a gloomy, work enforced bedtime, I had my first confirmed sighting of an Iridium Flare. It lasted about 20 seconds or so, and about 15 degrees of sky, as it passed through the constellation of Leo heading northwards.

It was spectacularly bright, much brighter than the International Space Station, and to me, slightly brighter than Venus, although  quick research reveals they can get as bright as mag -9. The Iridium series are communications satellites in low polar orbits, and they look like this; 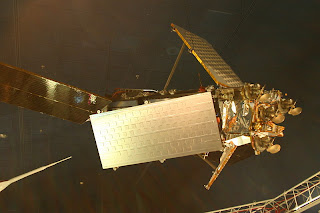 The door sized antennae seen here are highly reflective, and when the satellite and the sun are in the right position, the sun is reflected down onto the earth below so observers can see it for a short time. Even occasionally in daylight if you know where to look. As well as being brighter and much shorter lasting than the passes of the International Space Station, the Iridiums travel North-South in the sky, rather than the West-East passages of the ISS.

So if you are out one night, and see a really bright, dazzlingly bright even,  star moving slowly North for a few seconds, then that's what it is. There are many Iridium satellites, apparently the one I saw was Iridium 29, and you can actually look up online to see when you might observe a flare. Believe me, it's a great sight.

Posted by Simon Douglas Thompson at 03:20