Today saw us go out to play Car Colston, a ground so pastoral it could bark and round up sheep, for our second last Sunday match of the year.

I can't say I was feeling massively enthusastic this morning , but having succeeded in getting a lift at the last minute - thanks stepdad! - the really rather beautiful setting, complete with pub beyond the far boundary, lifted the spirits somewhat, as did the totally unexpected decently pleasant weather.

No doubt fed up with losing the toss every match, the skipper sent his son out to toss with the strict instruction to bat first if he won on pain of eternal torment, and lo and behold it worked.

It meant that us senior players - excluding myself we had probably our strongest side of the year - could get on with the serious task of sitting our arses on chairs and not having to get changed for hopefully another couple of hours, while our juniors got on with doing the batting.

WE sent out our young opener alongside our youngest opener, and they made a fine start on a really testing wicket, with a hostile pace bowler making the ball spit nastily and jag around. Scoring runs was difficult, but of course, the young opener was able to, and he nearly made it to his 8th 50 before spooning a leading edge to slip.

Nonetheless, an opening stand of over 50 represented a really good start.

The problem was, we had slightly misjudged our batting order by backloading the big hitters, which meant we had too many of the young lads batting together to really hit the accelerator towards the end of the innings. It was still good for the young lads to get used to batting time and building an innings, we could have just done with an adult at the other end. We had the first team captain in the side, left unused in the hutch.

Although to be fair, he wasn't exactly rocketing off his chair to put himself forward to bat, perhaps because his cricket trousers have two large holes in the knees. I didn't feel like batting either, knowing that the opening fast bowler still had two overs left and in no confidence in my ability having not played in a month.

I think we also thought the the young lads would get out, but they didn't. The skipper's son made an excellent 42, the keeper worked hard for 21. But we needed our power hitters to be out there for more than the two ball "cameo" we had at the end from one of them. 135 off 35 overs never relt like a good enough score.

It was then tea time, and here my admin really failed badly. Or rather my phone did, setting my new phone up meant I missed the text message offering us tea.This really did not go down well with the senior pros in the team, and they kept reminding me of my ineptitude all afternoon.

So as well as being a hopeless player, I'm now hopeless at everything else.

So, tea time with nothing to eat, not that I eat at tea time anyway. It gae me a chance to have a walk out of earshot of my grumbling team-mates, and take in the highly picturesque setting. It is deep into September, but the open setting and large numbers of insects on the wing meant that at last I was able to watch swallows swoop low over the ground, while higher up flocks of house martins twittered while their white rumps glittered in the occasional sun showers.

The chairman having been successfully annoyed by my nature digression no doubt, I can then move on to our bowling, which was opened by our first team captain, who hasn't bowled in Saturday cricket for years, steaming in like a rutting stag and trying to put the batters in fear of their lives with some classic tennis ball bouncers on the spongey wicket. It worked as well, as he had one of the openers caught just about two handed by the skipper's son.

I did my best to field at sqaure leg, dreading a hard shot being blasted at me but fielding with good energy and enthusiasm - wearing a fitness band has helped greatly with this although not with anything that might be useful to the team like, I don't know, being any good at the game.

The wicket never seemed to play up as much for our bowlers as it had Car Colston's, and we couldn't take wickets often enough to put any real pressure on the opposition. The chairman bowled well without luck, the skipper's son bowled well to take a wicket first ball but nothing else, and I came on to bowl an over of painful utter rubbish, my arm not coming over properly and my ankle swelling while I bowled.

I haven't bowled for about 5 weeks to be fair, but it's just physically becoming impossible now, which is making me rather sad. I made the throat sltting sign after just that one over.

We did take a couple of late wickets through some deviously cunning off spin deployment, but all anyone was thinking about now was getting to the pub for roast potatoes.

Which after we lost, we did and very nice they were too. Feel very fat tonight.

All text and images copyright CreamCrackeredNature 11.09.22 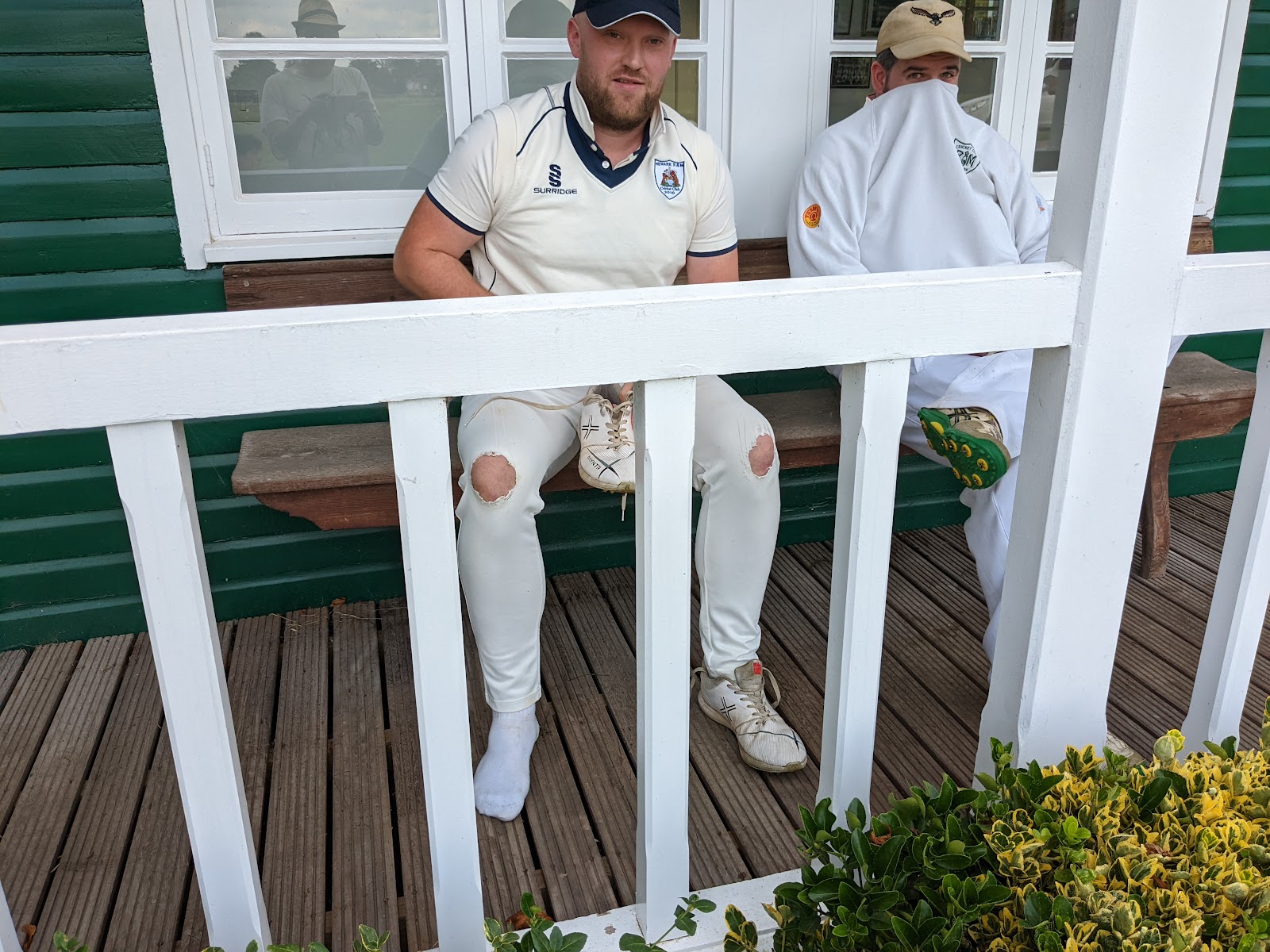 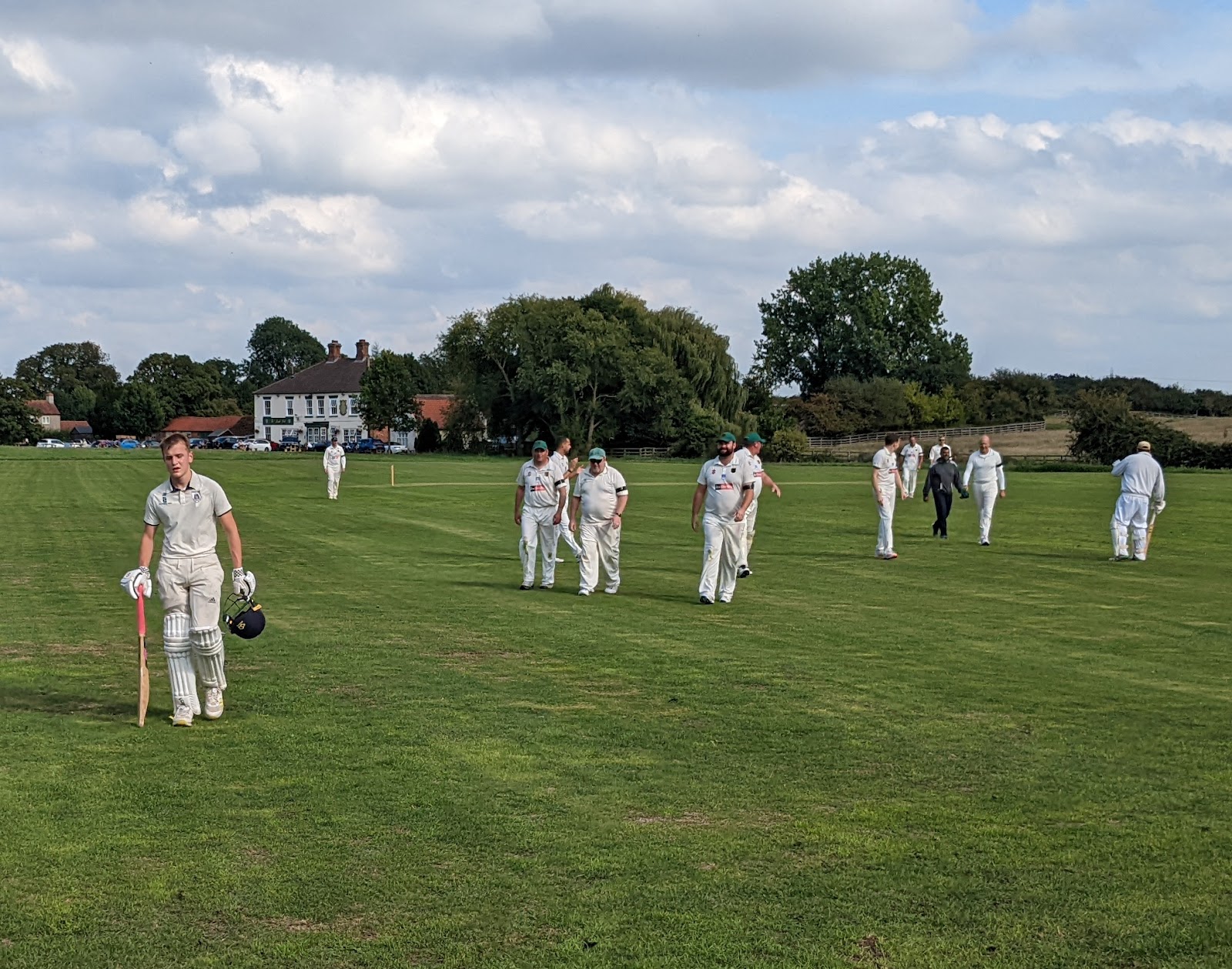 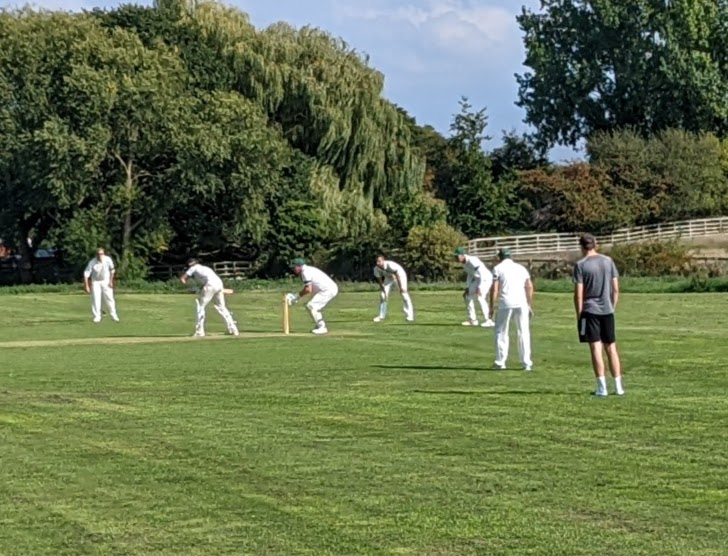 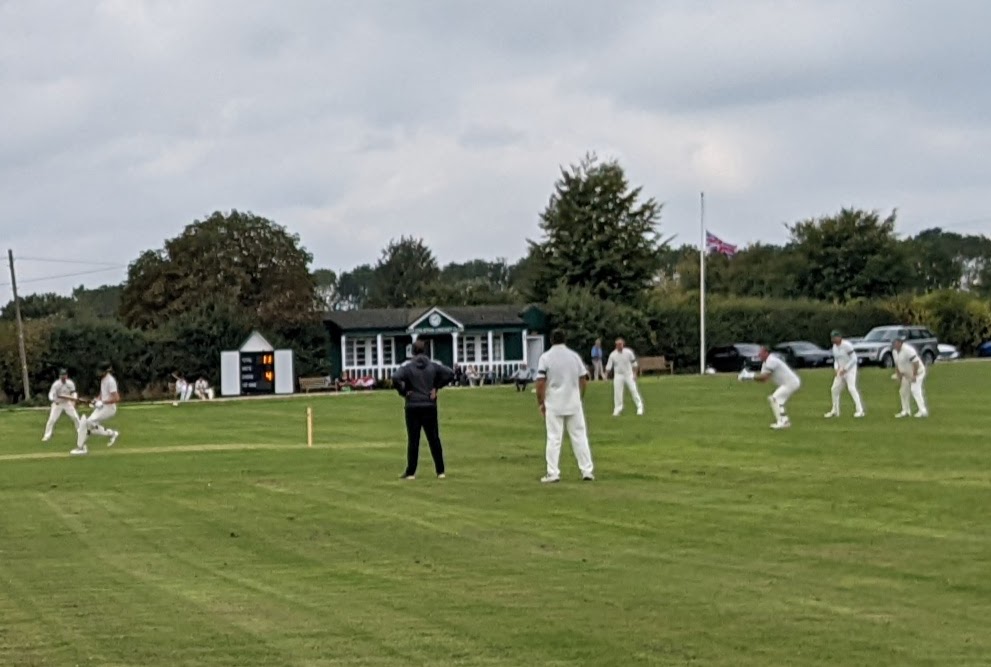 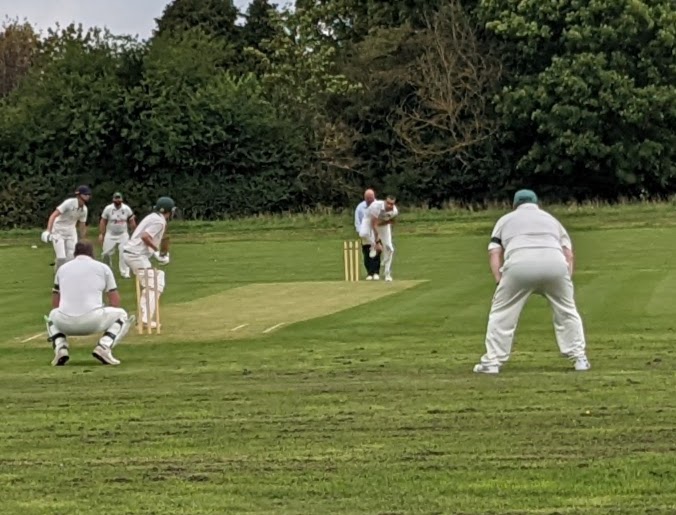 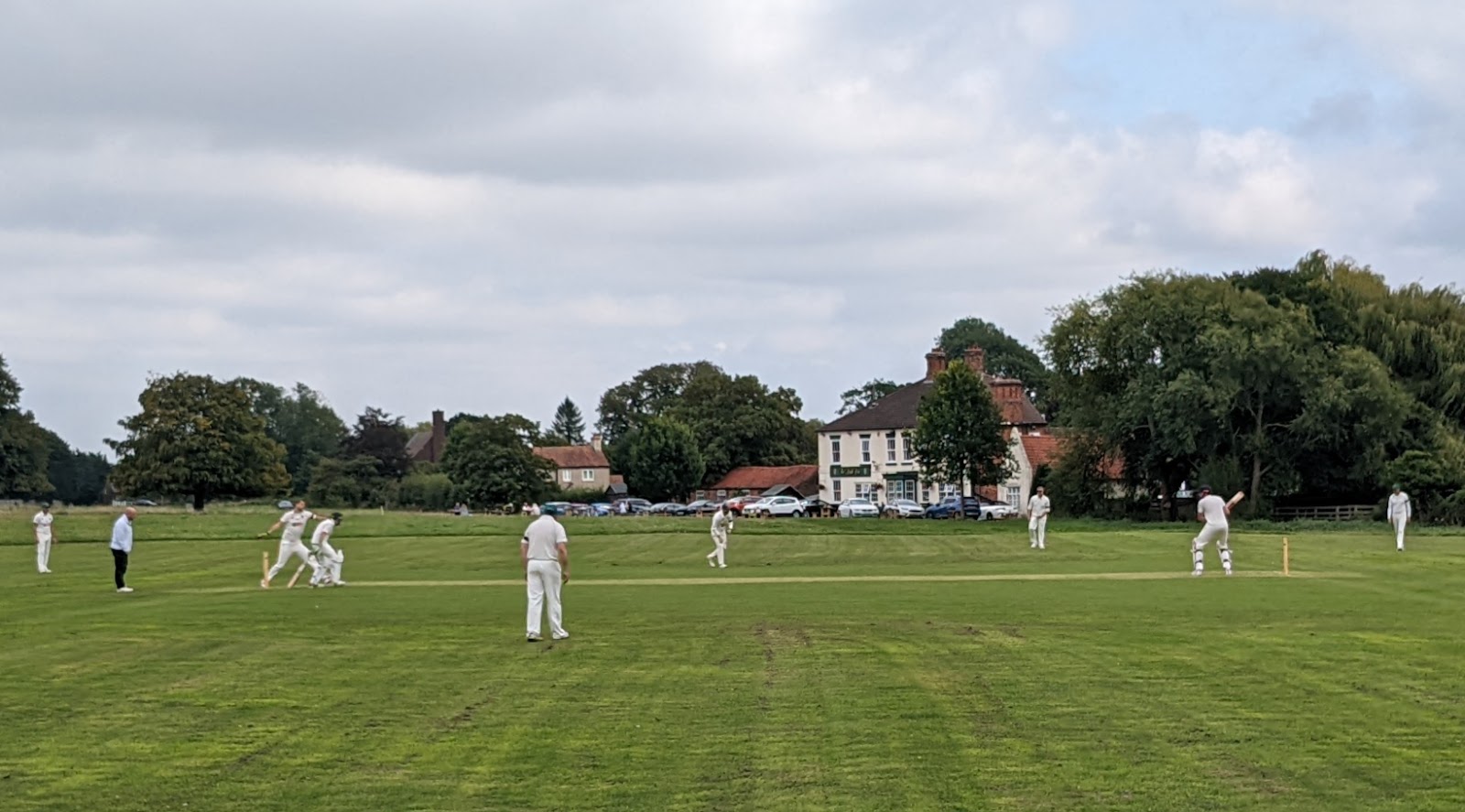 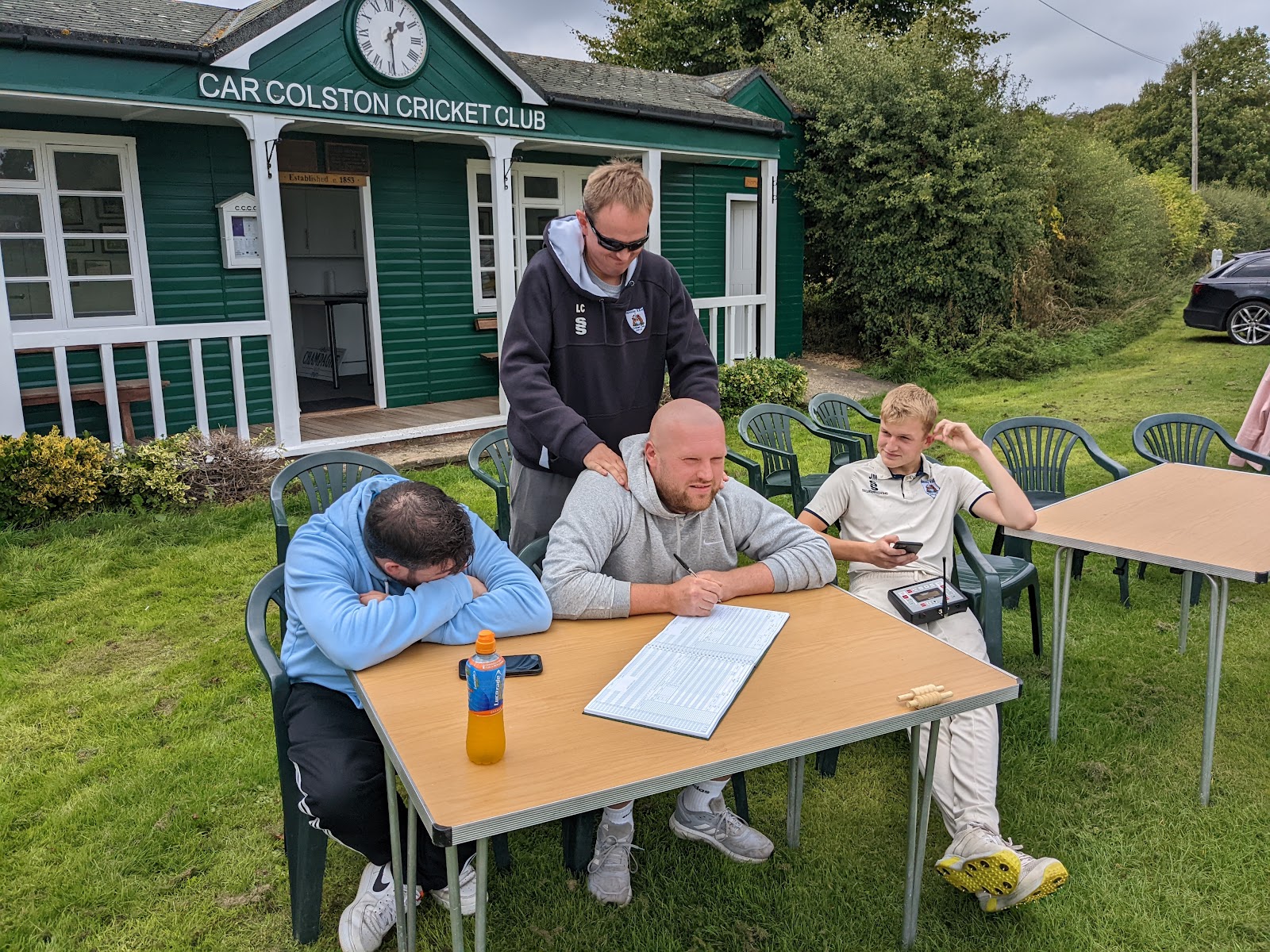 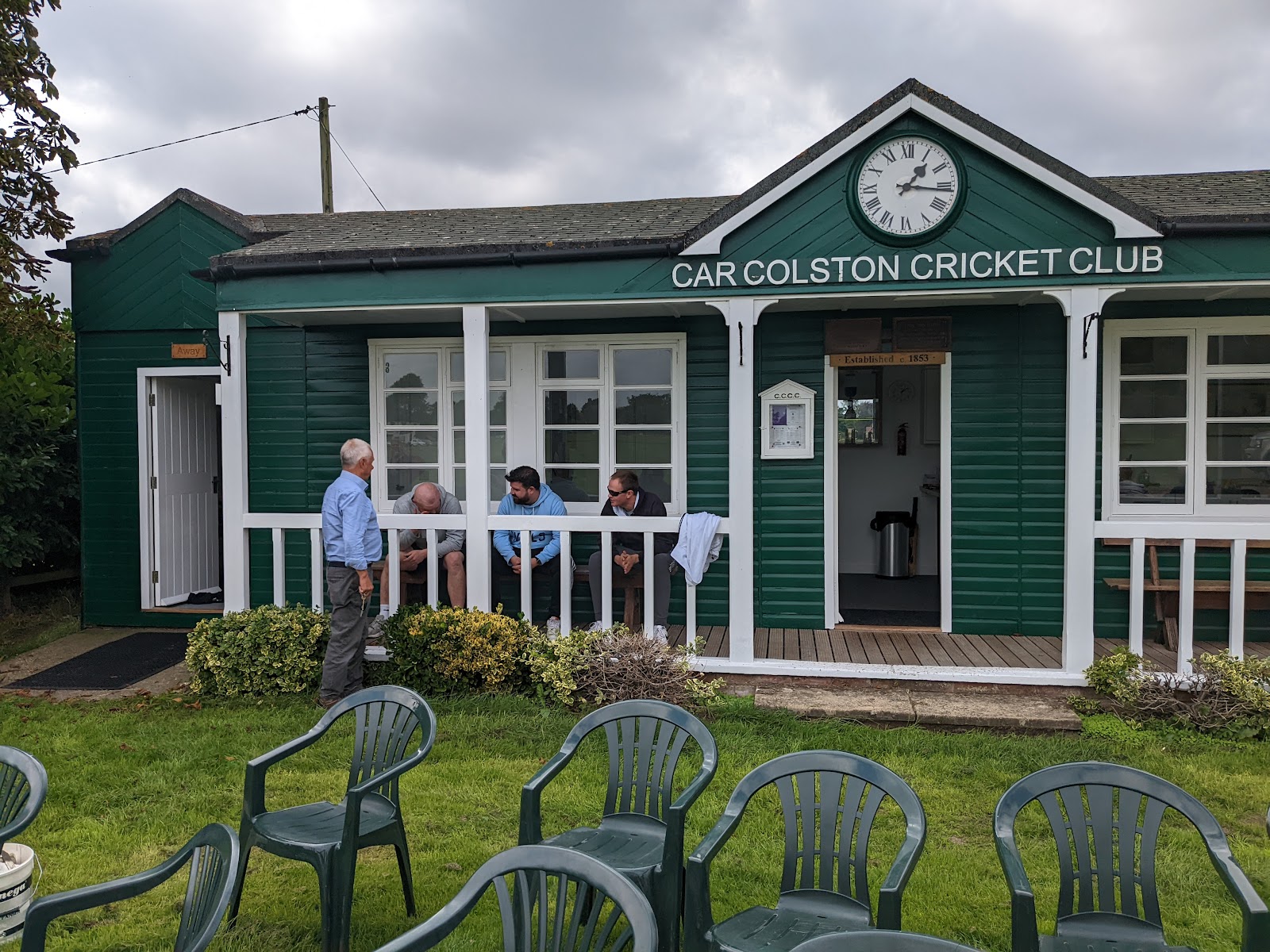 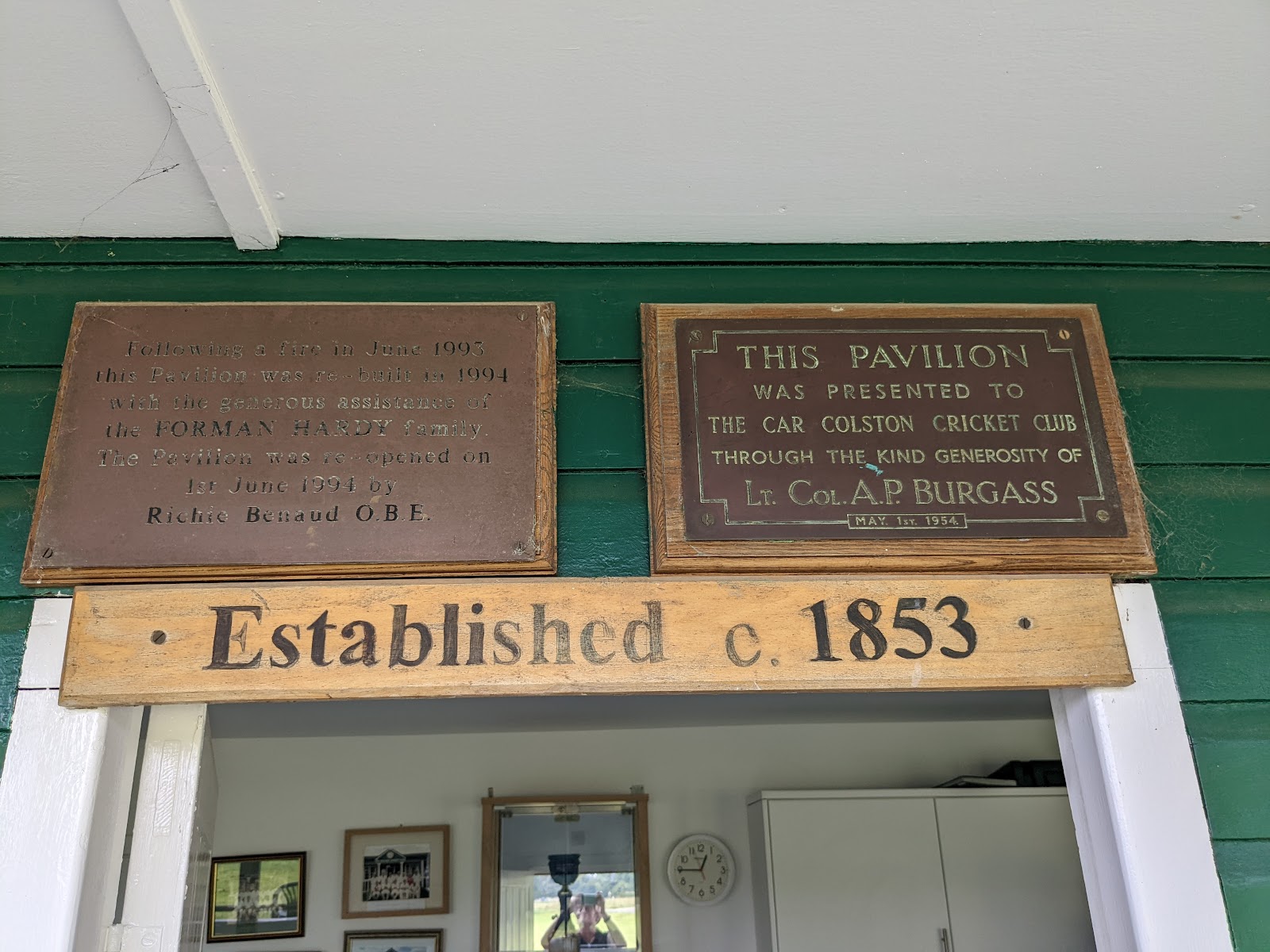 Posted by Simon Douglas Thompson at 16:28