So, as the sun was going down last night, I was out in my postage stamp sized garden pottering about with, er, garden things, when the sound of mewling reached my ears.

I thought it was a bird at first, then when it continued I realised it was probably a cat. I just assumed it was a local feral passing through, as I've seen feral cats in the vicinity of my flat before.

Later on, I went out in the rain to put some rubbish out, I heard the mewling again, coming from somewhere over my back wall. Thinking there might be an injured cat out there, I put on a head torch and headed into the overgrown yard of the beauty salon next door, who own the land over my wall.

The high pitched little meows got louder, and it seemed clear to me I was in the right place. And it didn't take long to locate the source of the sound. I looked to the right, and my torch beam swung round to reveal a tiny tabby kitten sitting shivering in the rain in a forked tree trunk looking straight at me.

It wasn't this kitten that was making the sound though. The mewing was coming from a second jet black kitten that I only saw when it moved.

I was utterly stunned.

I grabbed the two of them - they made no attempt to run or hiss at me - and took them into my kitchen, while scrabbling around for a box to put them in and grabbing the oldest towel I have as a sacrifice to get them dry and give them something to lie on and get warm. Sitting however was the last thing on their minds, as they kept climbing out, with the tabby kitten especially keen to follow me around.

Their then followed a frantic period of researching and phone calls and messages with a vet nurse I know to find out what to do. I've never rescued kittens before after all!

The advice is actually rather counter intuitive to what you actually want to do, which is give them a hot water bottle and snuggle with them all night making baby noises. If you are assuming they are feral, which I was, the advice is actually to put them back where you found them so mum could come back for them.

So I rigged up the box as a shelter for them, and put them back, although if it got cold or started raining again I would have fetched them straight back in. It was about 11pm by now, and I resolved to check on them in the morning.

So, Monday morning I go into the beauty salon, explain what I'd found, and asked for permission to go out back in the yard and see if they were still there.

They were exactly as I'd left them.

So, after a colossal amount of fuss from the staff next door, who gave me a bigger box they couldn't climb out of and an extra blanket, I brought them back into my yard where again, mum could find them if she was around. It was clear now that the tabby was much the more active of the two, desperate to climb out and explore, while the black kitten was quieter and less active, although seemingly just as healthy.

The ladies from the beauty salon now brought kitten food, which they totally scarfed down indicating they were weaned and older than the 6 weeks I had initially thought, while I phoned a cat rescue I know through work. It was becoming blatantly obvious to all of us that these poor little mites were not feral, rather they had been dumped. They were too healthy and tame to be feral kitties, and they could not have been in the yard for long as I would have heard them.

The rescue called me and said they'd pick them up from a local vet practice, so I prepared to walk with a box of kittens through town. Thankfully the staff at the estate agents out front who run my flat offered me a lift, after about an hour of fussing with the kittens and wanting to take them home with them.

The staff at the vet practice were exactly the same too, although they also sexed the kittens - black kitty was a boy and tabby kitty was a girl.

The last I saw of them was them being taken for a checkover by the vet, after which they would go to a cat foster home.

I was very sad to see them go.

All text and images copyright CreamCrackeredNature 24.10.22 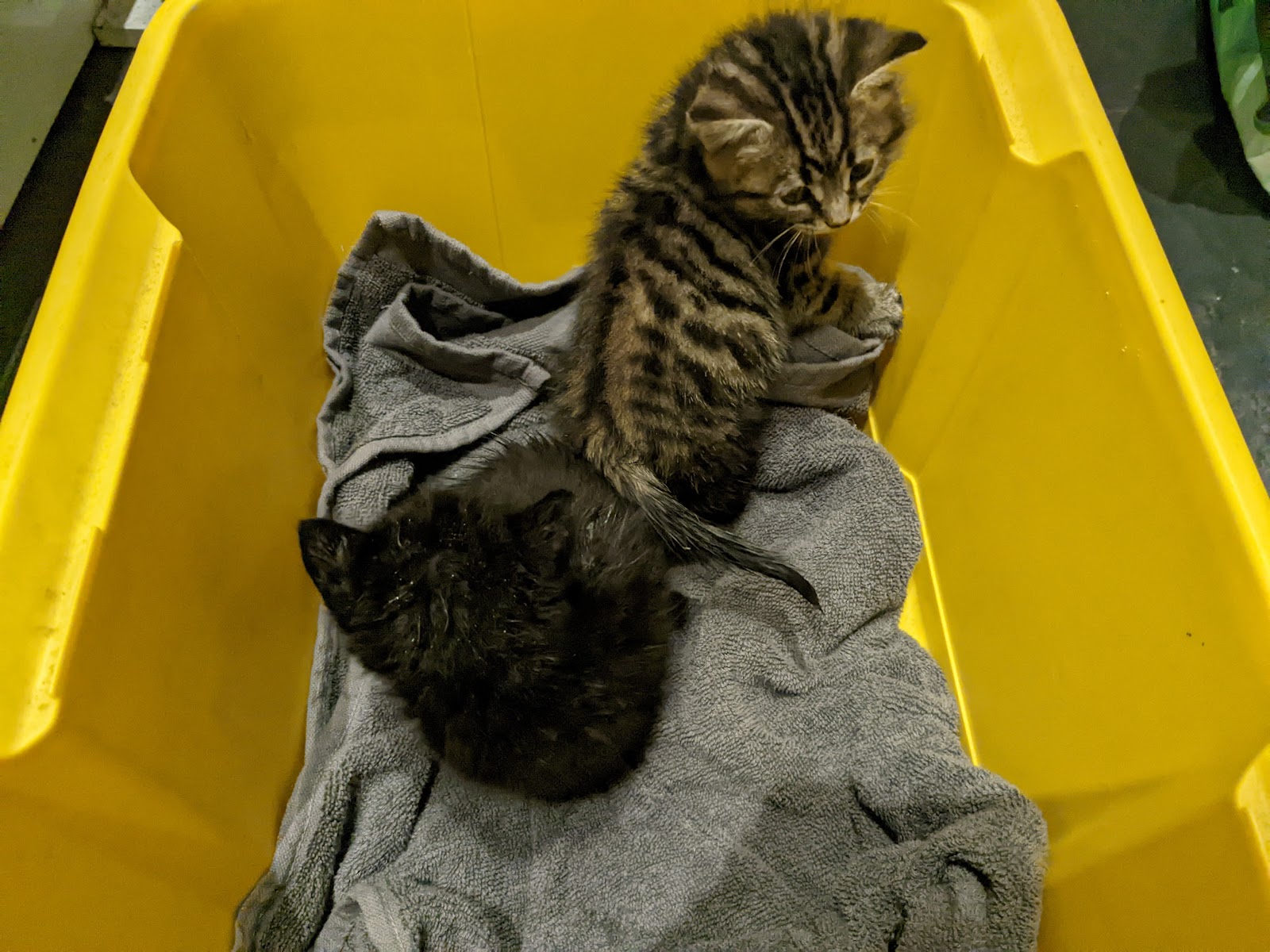 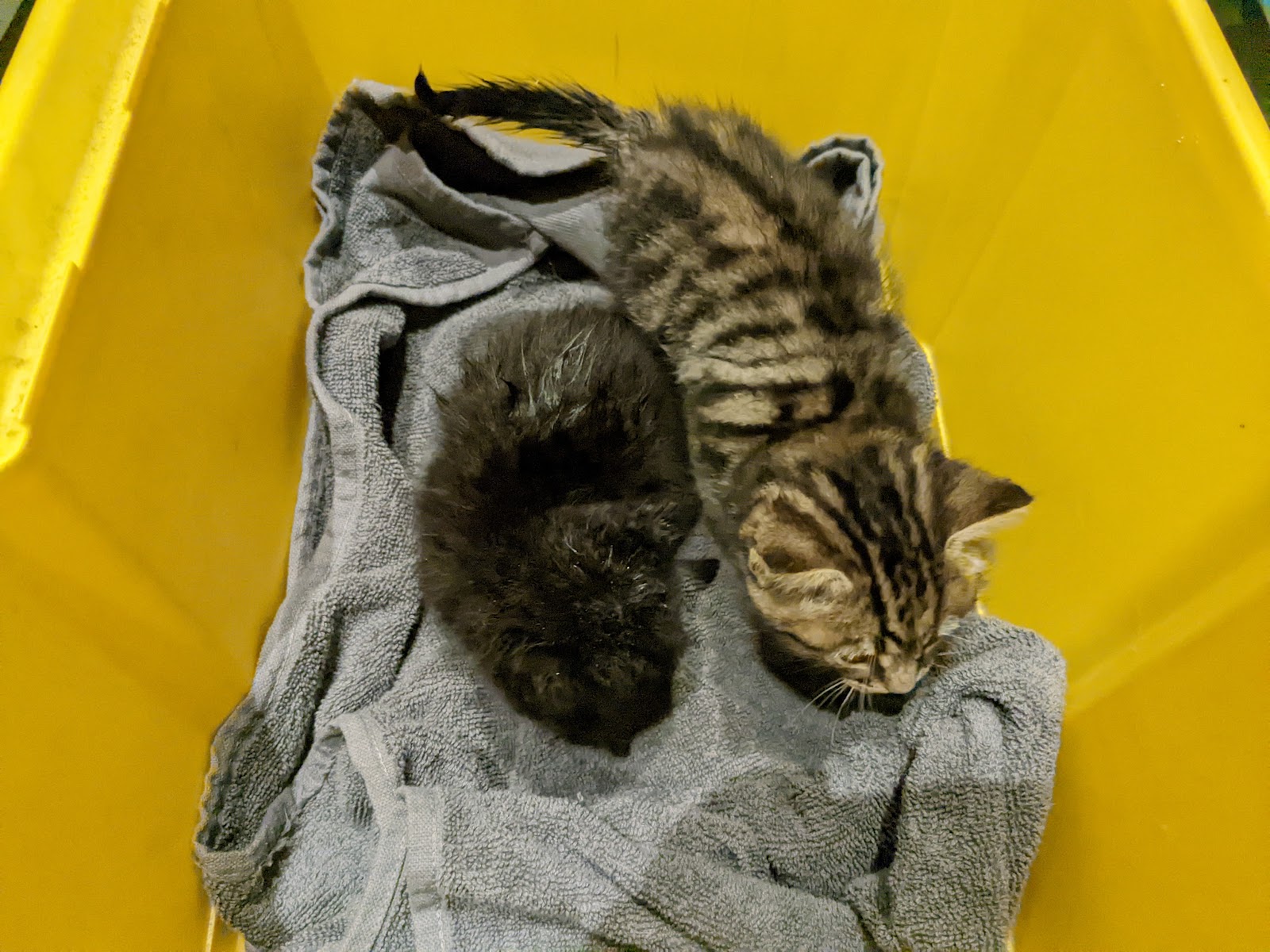 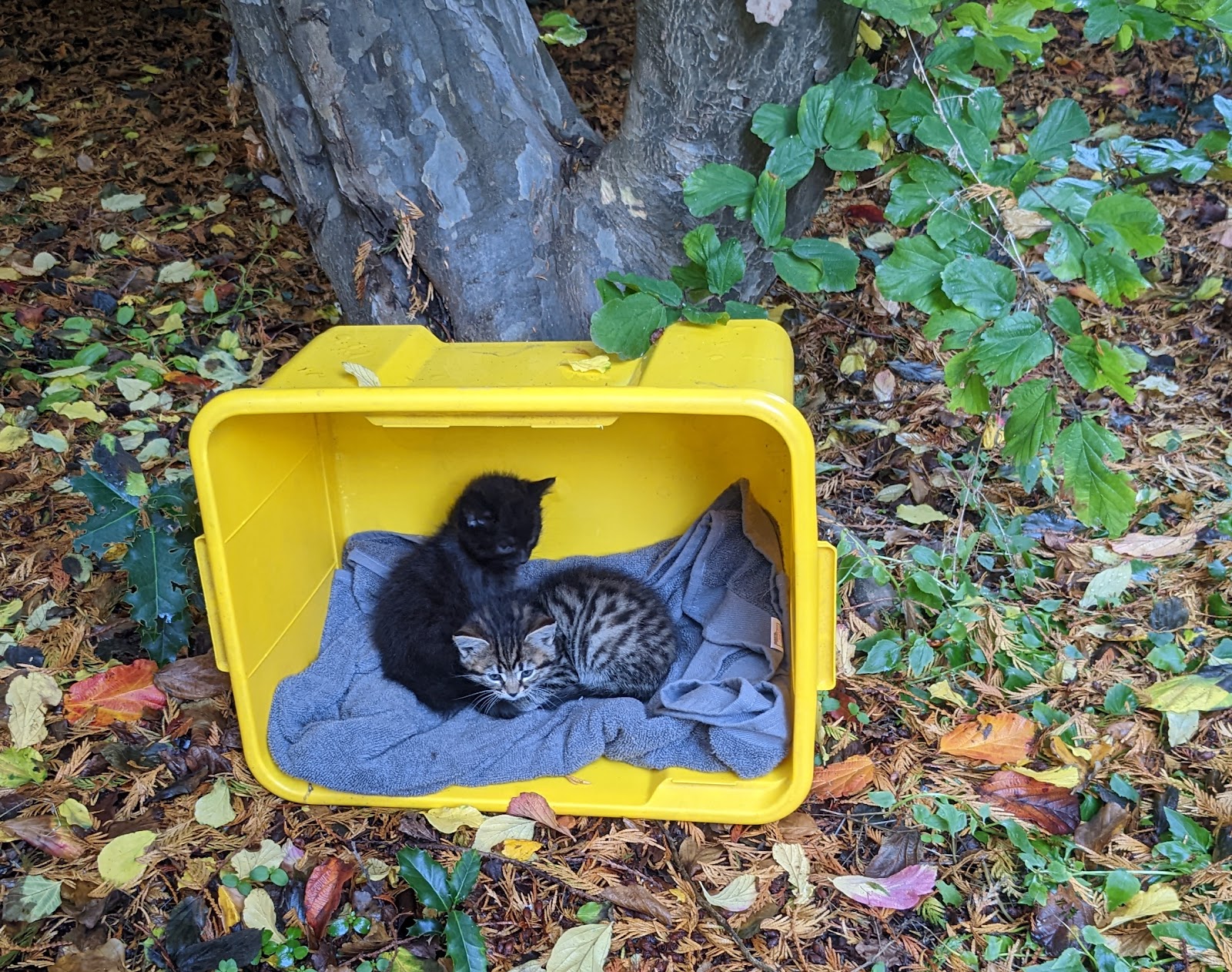 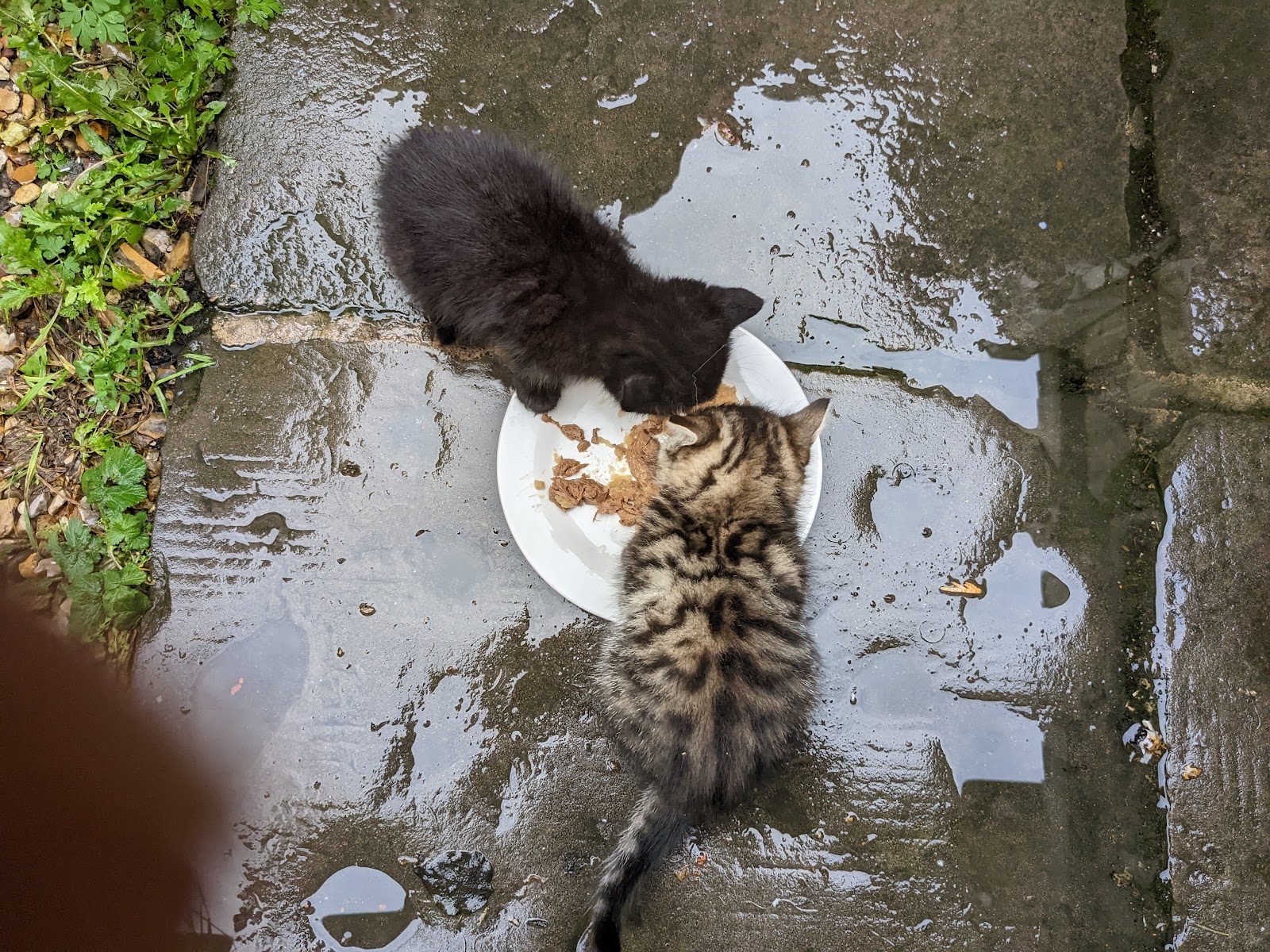 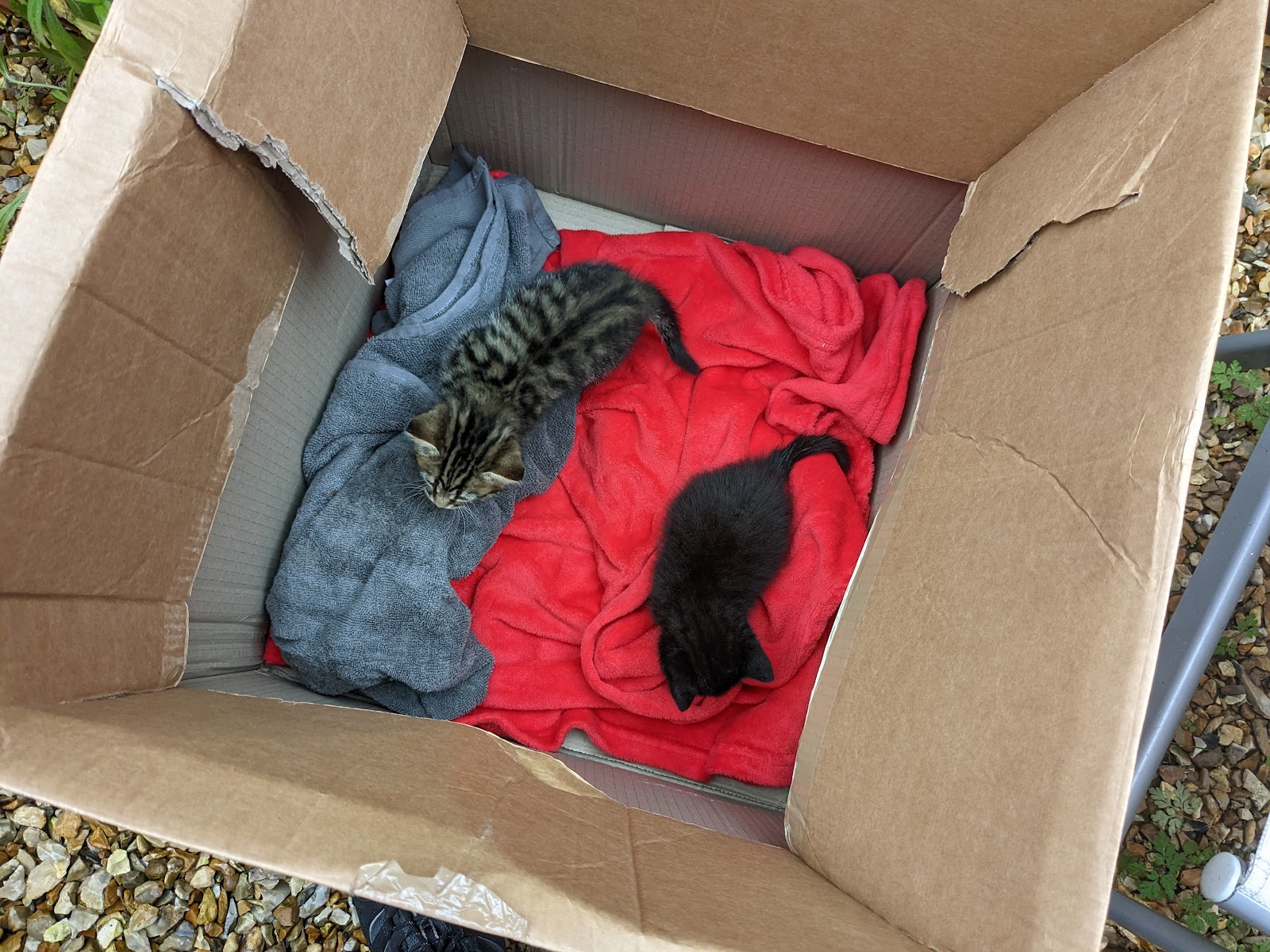 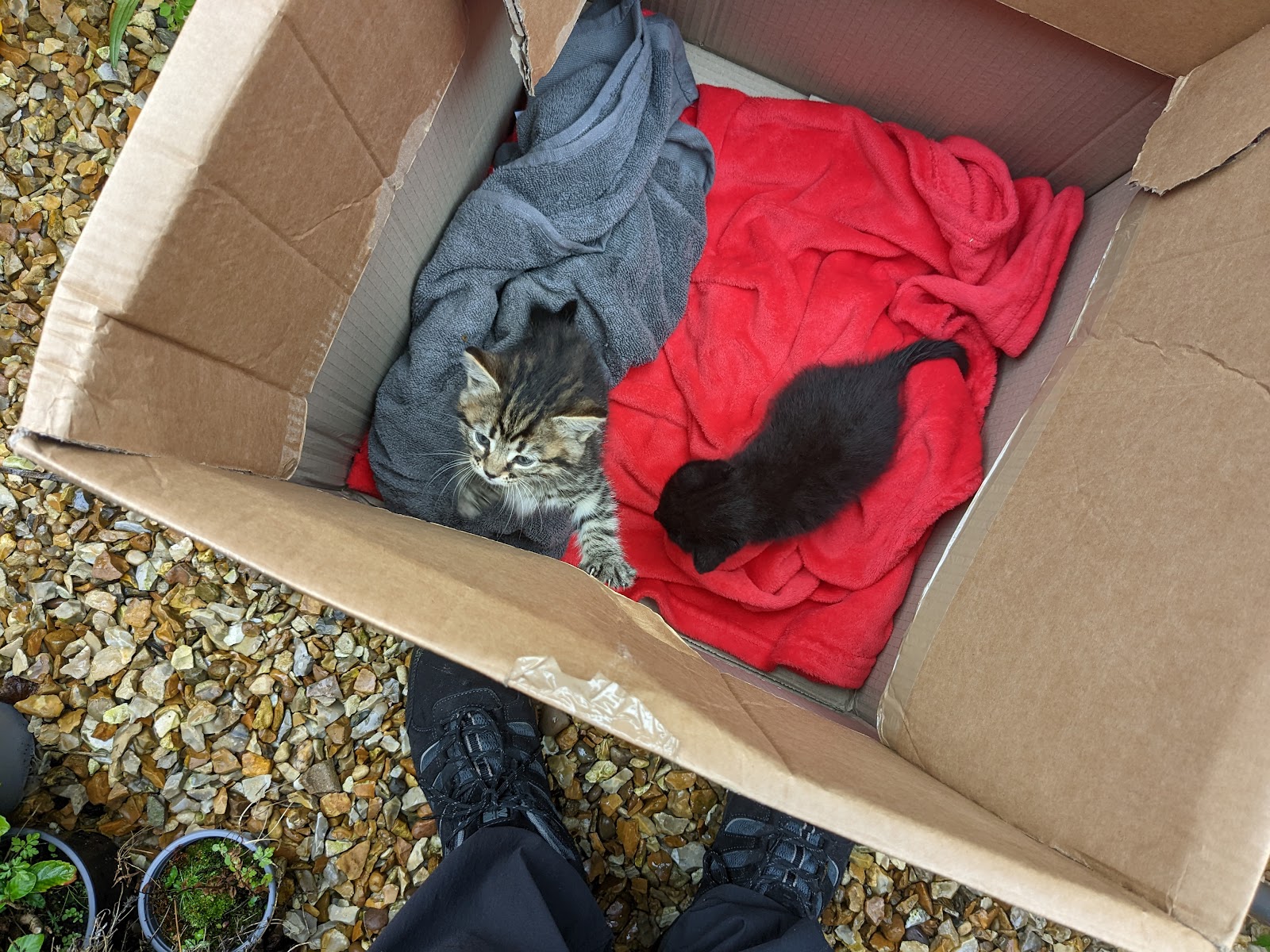 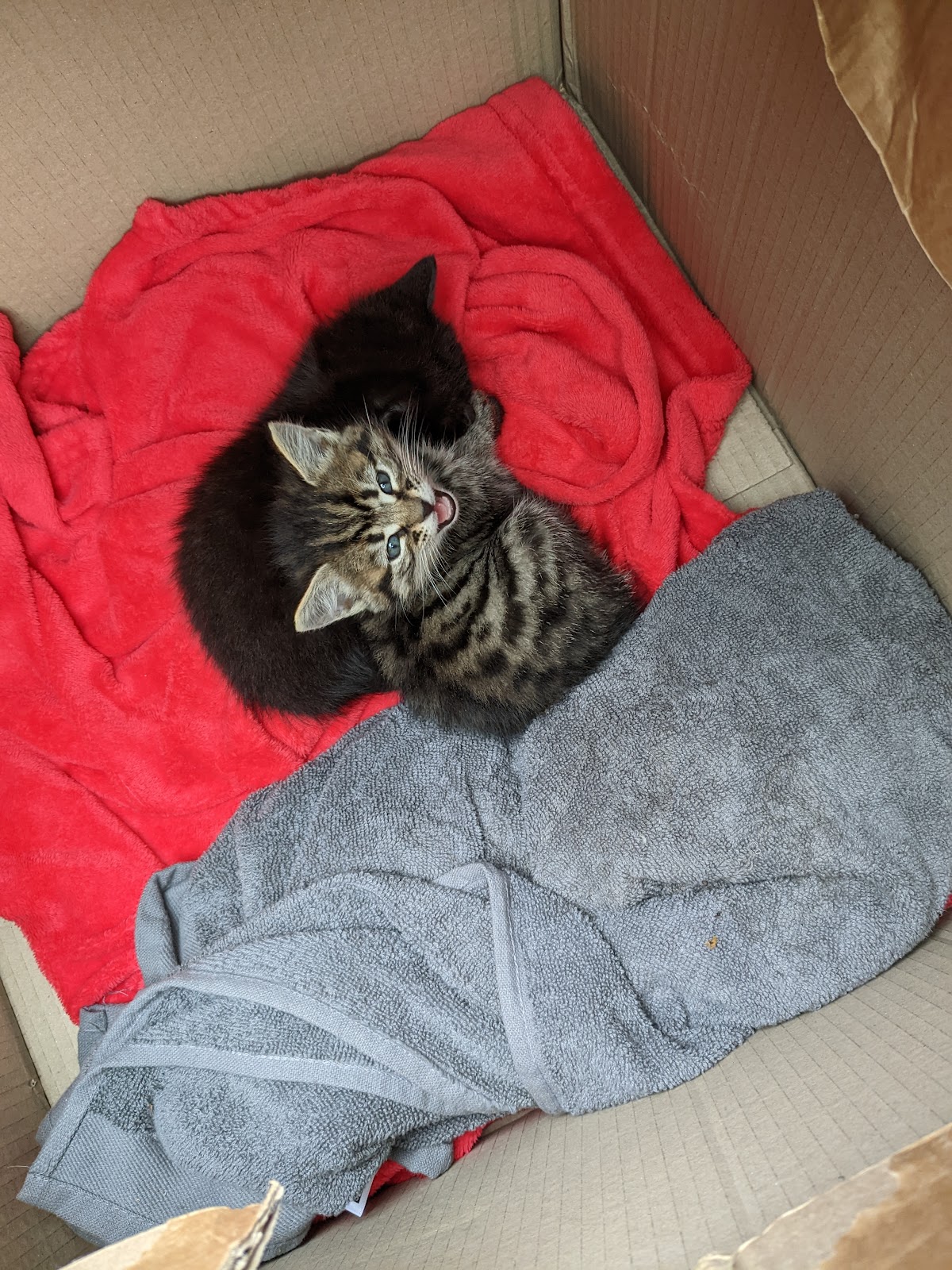 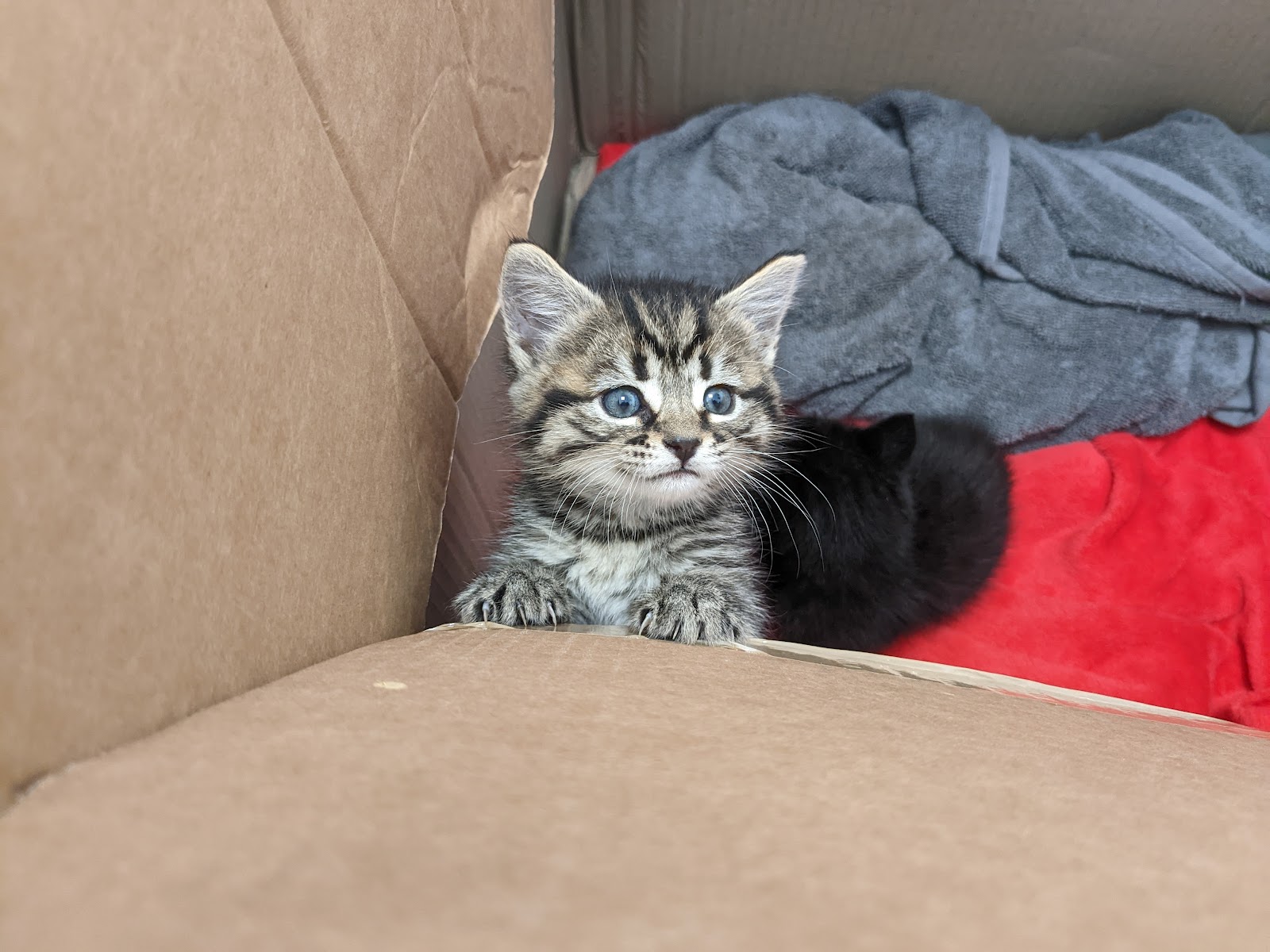 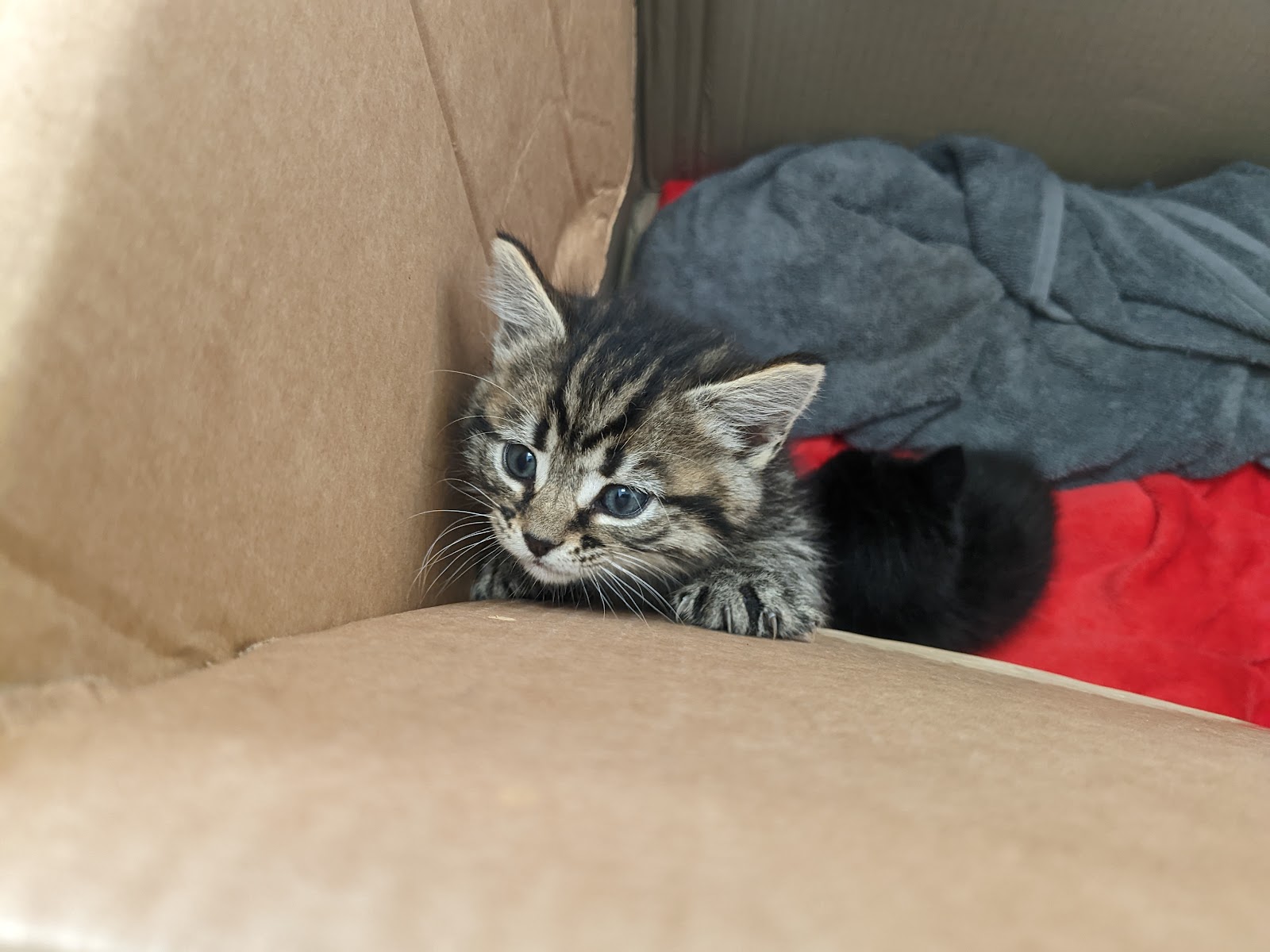 Posted by Simon Douglas Thompson at 16:30