Another home match, this time for the Sunday friendly side against Calverton.

This was one of our friendly matches that I had organised, so there was no relaxed preamble for me - I had to help get things set up, and meet and greet the opposition.

Calverton were a good bunch of mainly young lads from their second team, with an Australian captain from the first team who we all assumed would be as good as Steve Smith, and wouldn't take his foot off the gas for a second. Sandpaper optional.

One of our ground staff very kindly came down to properly prepare the wicket that had been such a bad track on Saturday, and it actually played pretty well today although the odd ball was still misbehaving as I was to find out later. The captain and I thought it would be best to bat first, but of course he lost the toss and they took first use of the track.

It had been pretty clear from the start of the day that this was going to be a tough match as Calcerton took their youngsters through a pre-match fitness and skills routine, while our players sat around on benches eating and smoking. This was soon borne out, as they got off to a flying start helped by my inability these days to try and catch anything hit really hard. The heart says yes, but the brain says no, and self preservation takes over.

The openers were a contrasting pair - a lad about the size of the stumps but with the seeming power of Ben Stokes, and a big unit in spectacles who hit me for 6 first ball when I came on to bowl, then 4 before retiring on 50. Lucky me.

For a change I actually bowled ok with a bit more snap than recently, but there was no swing for me. I took a wicket with another bad ball, but there was some good stuff. Alas I strayed onto leg stump once or twice an over and would immediately get hit for 4 - the wicket maiden I bowled was an aberration, evidently. At least I didn't bowl any no-balls.

Other guys bowled about the same as me but others bowled better so it wasn't a total massacre in the field. They put up 198 for 4 in 35 overs, and we did manage to keep the Aussie skipper pacing the sidelines in his pads which felt like a tactical victory at the time. One guy waiting to bat had decided to take his kit off during the final over, and ended up having to come in to face the last ball just holding a bat with no pads on or anything.

He still hit it for 4 though.

Our batting got off to a sticky start and within 5 overs we were 9 for 2 with numbers 2 and 3 having both scored ducks. Our opening bat and the 3rd time vice captain were then able to put on a good partnership having to withstand from very good bowling in the process. When he got to 50, the Calverton scorer thought he should retire "because that's what we do".

"Well that's very nice" we said, and told him to go on and make a hundred. Sadly he didn't, but the reality is we were light on batting and figured that once he'd gone, we'd struggle like anything against their bowlers.

In the middle of all this, the Aussie captain decided to attempt a run out, missed the stumps by miles and succeeded only in smashing one of his own fielders on his upper cheekbone with the ball. There was then a pause as first aid kits were hunted for and instant ice was found.

Science is such a wonderful thing!

Anyway, he went off for a check up and what I'm sure will be a huge black eye as I write this. In the meantime our lower middle order were dropping like flies. I had to go in and face a hat-trick ball from the big opening bat, who turned out to be quite a rapid bowler as well. I kept the first ball out, at which point the fielder at extra cover decided to try and run me out but only managed to hit me in the chest with the ball.

Second ball I kept out too, but the third was short, jagged back and kept low to remove my leg stump, at which point the bowler ran down the wicket bellowing like King Kong and leading me to think he was going to try and eat my head. He was rather pleased with his triple wicket maiden.

It was all over after that, a heavy but not dispiriting defeat to a fine young side.

All text and images copyright CreamCrackeredNature 09.05.22 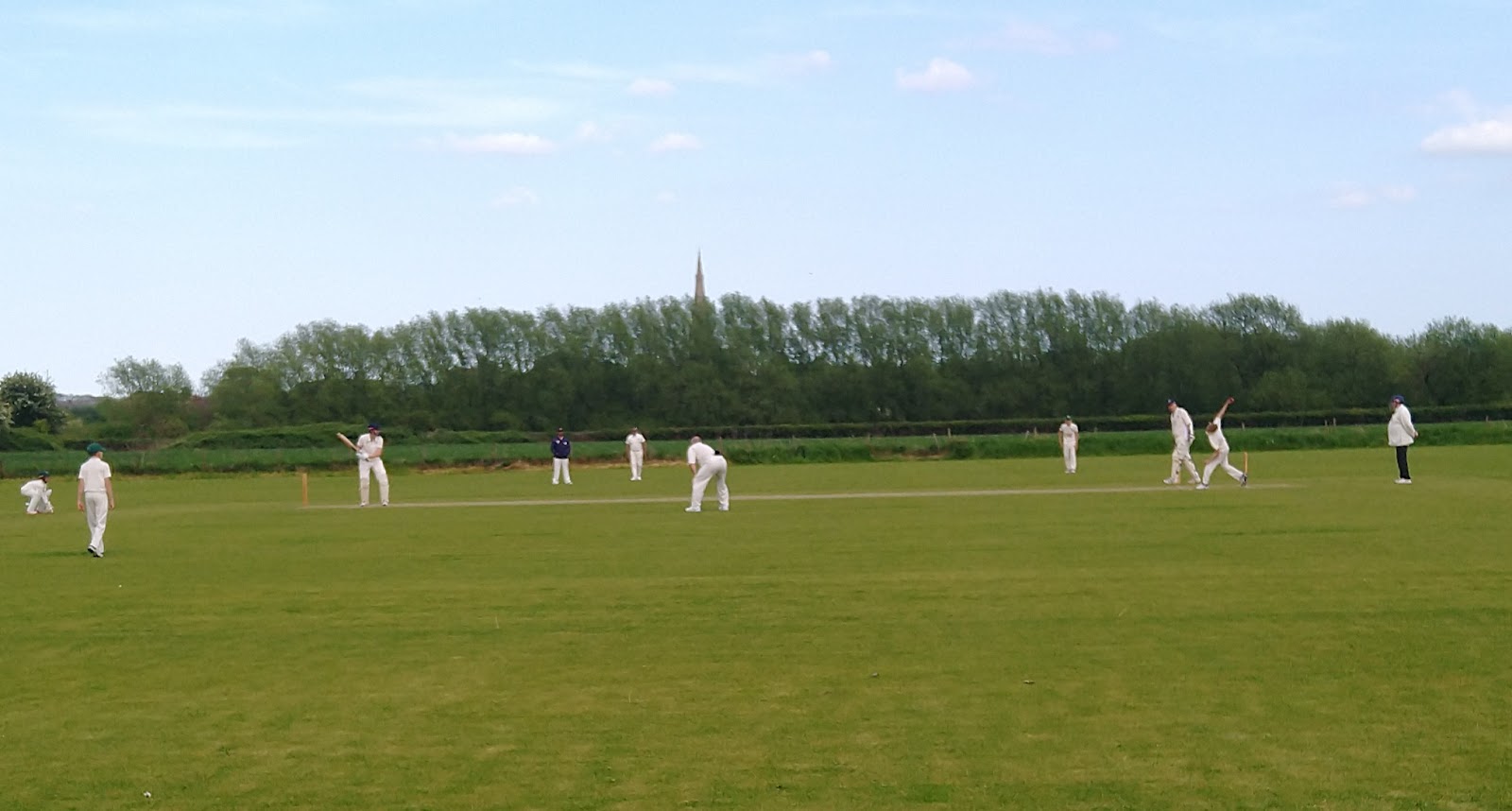 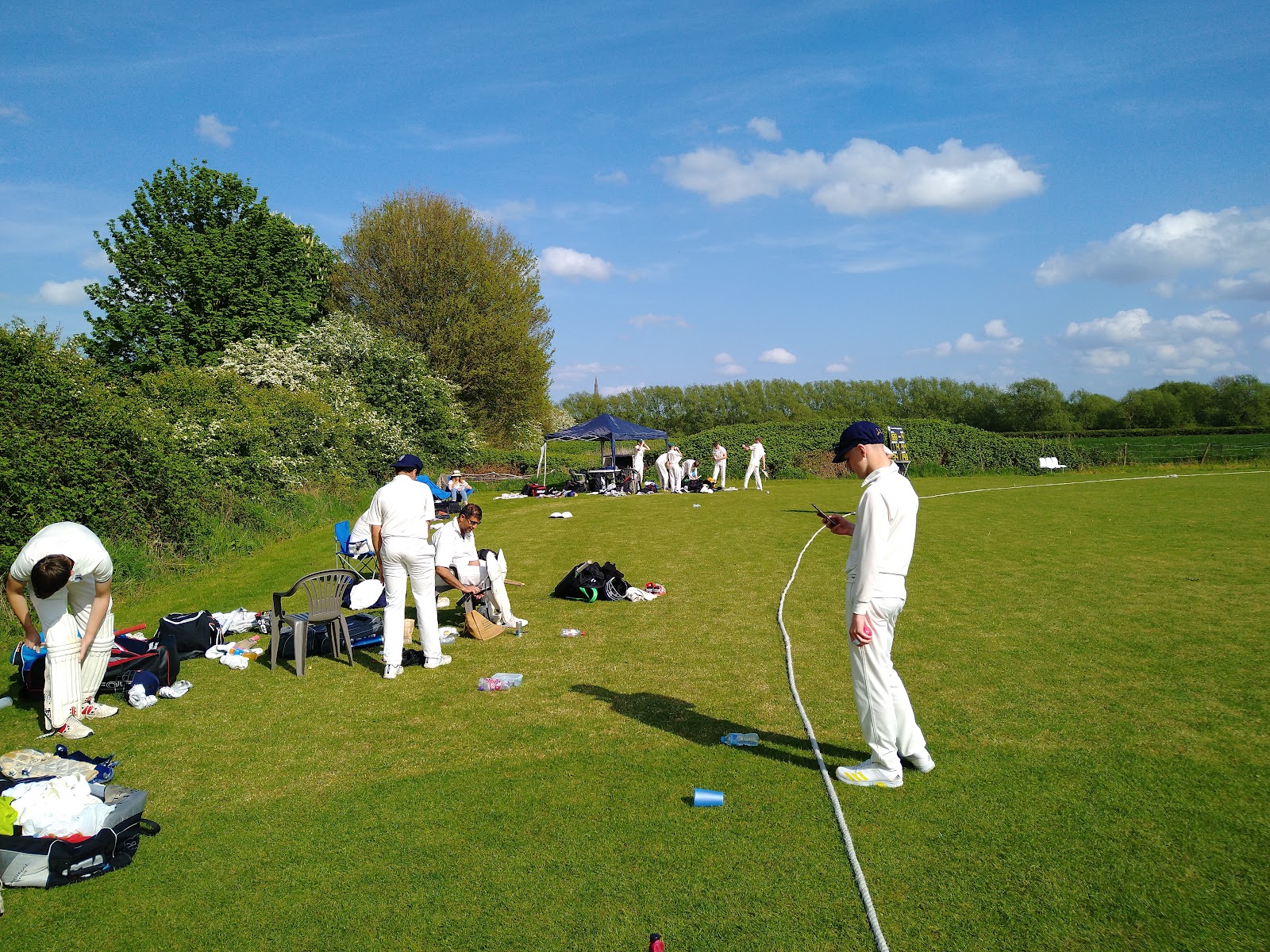 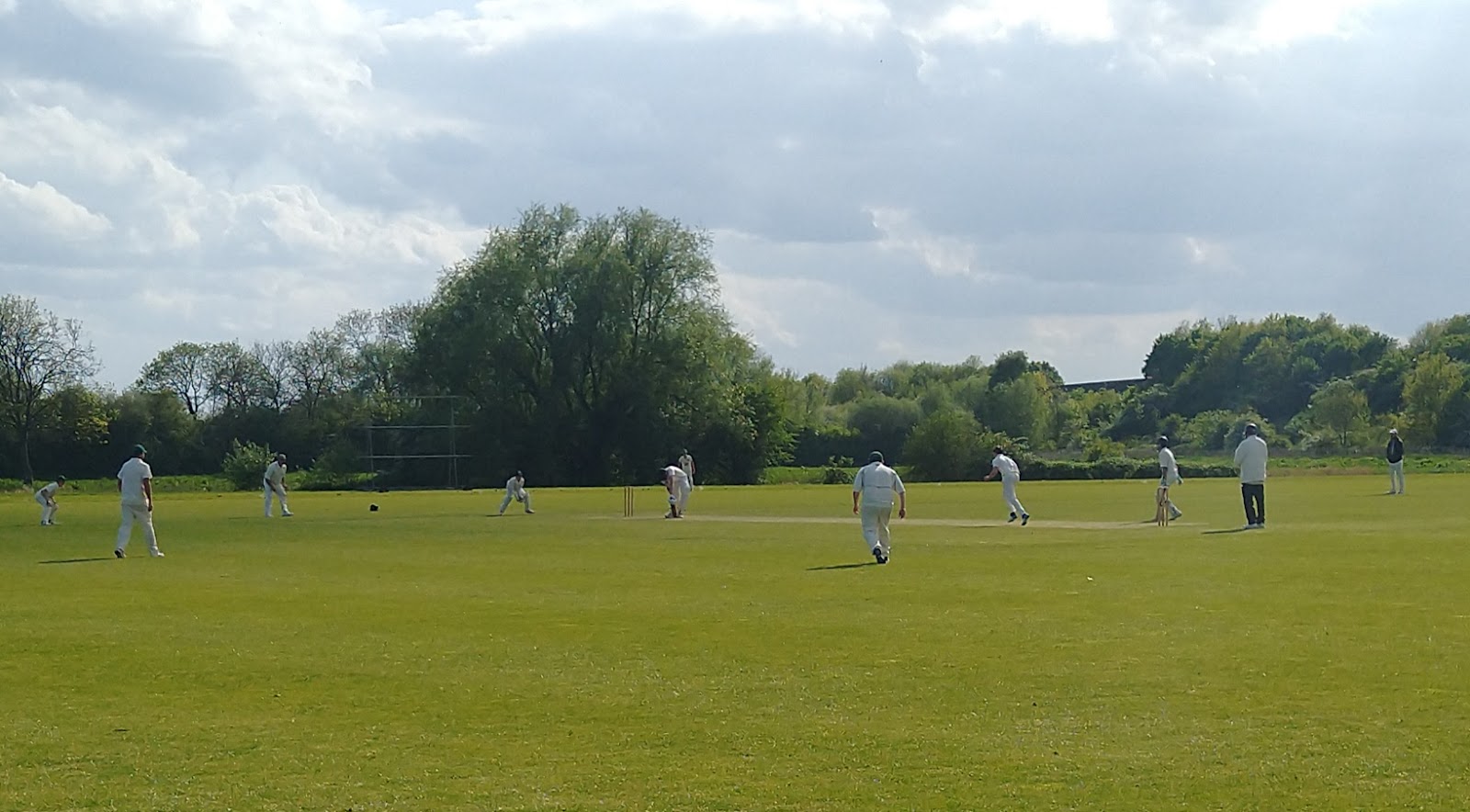 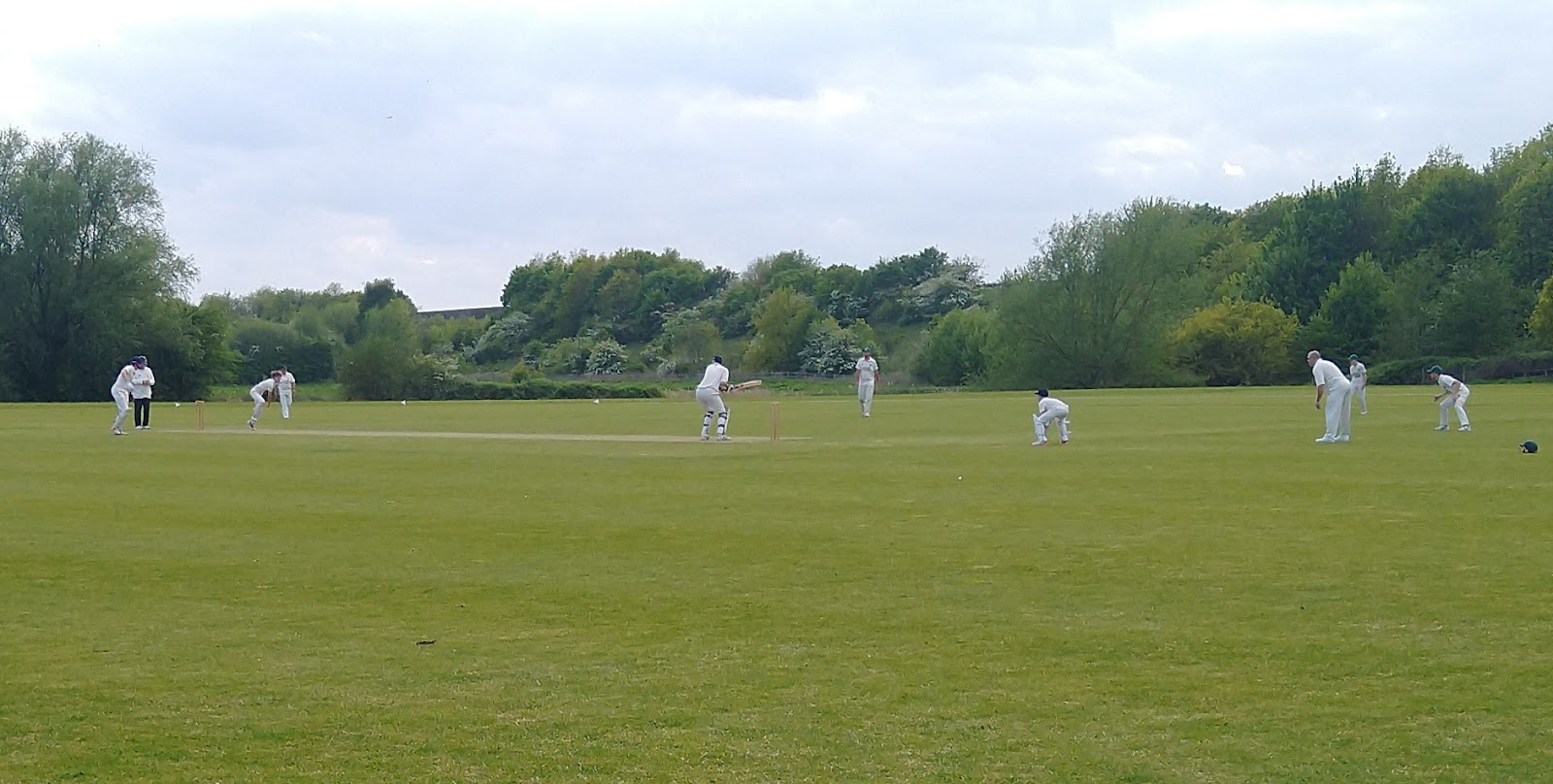 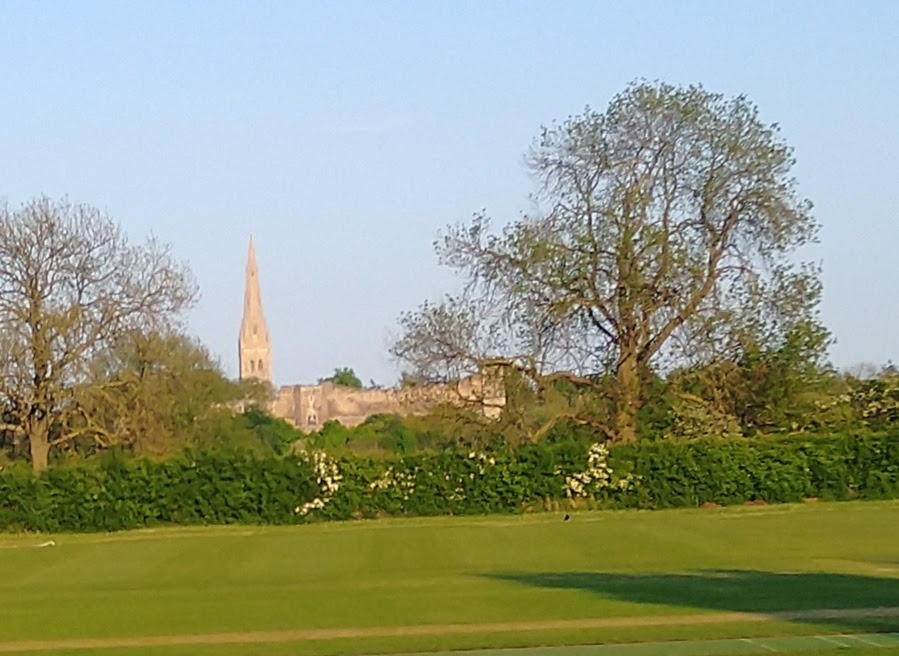 Posted by Simon Douglas Thompson at 12:24