On a whim, decided to do one of my periodic "oooh, let's see what moths are visiting the windows" patrols last night, and rather than the usual small speckled brown plume types, found this pretty specimen: 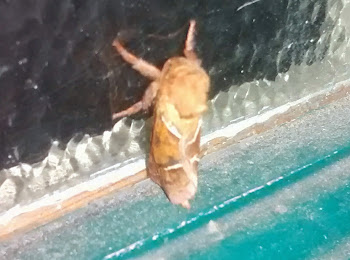 Thanks to Angela Harrod on twitter it was identified as an orange swift, an entirely new species to me.

It was a chilly night, and this obviously encouraged the moth to actually seek out a warm finger to sit on, and make no attempt to flutter off when I took a picture. 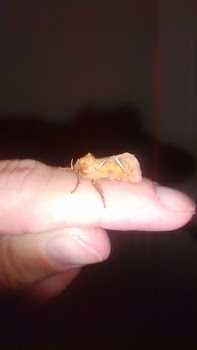 Eventually it was so settled I had to all but glue it back on to the front door.

This wasn't the only "lep" I became acquainted with in the last 24 hours. At work today, in the grim early cold of a warehouse morning, I noticed a dark flittering against the background of dusty racking and dented grey metallic shelving.

It was a peacock, in reasonable condition but with no chance of survival in the harsh warehouse environment. It would meet its end either by cold, lack of food or water sources, or the steel tipped boot of a cackling co-worker. Unwilling to let it meet a fate of this nature, I carefully cupped it in my hands, and took it fully four hundred metres out of the warehouse, all but out of the grounds and found a ncie bush in bloom for it to sit on.

All the way, I could feel its gentle fluttering and light footsteps on my palms, a strangely comforting sensation. Again, it didn't want to leave my warm finger tips, it sat quite happily for a minute or two, before I set it down on a white flower of some kind, an oasis of life amidst polluted tarmac.

Yes, it was a lot of effort for a single butterfly, but, you know, "He who saves a life saves the world entire" and all that. Such a colourful, vivid piece of life in a workplace such as ours, must be preserved at all cost.
Posted by Simon Douglas Thompson at 13:45