The Goldcrest in the Undergrowth

Today's run took me round the "Tour of the Two Lakes" route, and then along Clay Lane (where as I often do, I caught a brief flash of a Bullfinch white rump flying away from me, can't blame it!) and across through the Beacon Hill Reserve.

The birds are busy today. Great tits, blue tits, and chaffinches are about in large numbers, and lower down there are wrens, robins and dunnocks. There are nests to be built, strength to build up after winter, and female birds to court. The annual squabble fest under my eaves has begun, as the house sparrows have begun to nest in what to them must seem like luxury penthouses.

The most interesting spot I came across today was in the bushes low down along the cycle path next to London Road lake. A very small little olive green bird flitting about, possibly actually a pair of them. I was never in a position to spot the giveaway mohican stripe, but I'm pretty sure they were goldcrests.

The goldcrest is our smallest bird, tinier even than the wren, a dumpy little feathery ping pong ball with a golden stripe on its head that gives it its name, otherwise they are a rather subtle little bird. They are common all year round, but little seen due to their size and discretion I guess! I've only ever seen them before in my folk's silver birch tree, picking off tiny insects from the around the leaf buds.

Keep an eye out, they will come to feeders. The stripe on the head is the giveaway! 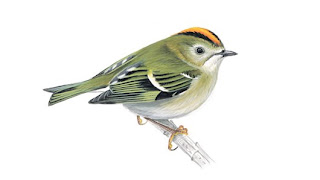 Posted by Simon Douglas Thompson at 04:40