The Beehive in the Sky

Once again, got a chance to have a quick dabble outside with my binoculars again. Yesterday I told you how the cold was making my hands raw, well, after last night and despite the gloves, they are withstanding the carpal equivalent of a death of a thousand cuts.

Got a look at Messier 35 in Gemini, the Perseus Double Cluster, the Mirfak Cluster, and a look at Kemble's Cascade *again* - as well as NGC1502 (I think) associated visually with the Cascade.

I then headed off into Cancer, where the famous Messier 44 Beehive cluster was my target. From my backyard it is just visible as a fuzzy patch surrounding its brightest star, to the east of Caster and Pollux. But in the 10x50s even from my frankly rubbish sky conditions, it is a fine sight, like a mini Pleiades. It is relatively close to us at 500-600 light years - hence the ease of resolving it, and also relatively old by open cluster standards, thus containg older, redder stars than the infant Pleiades with its hot blue stars still cloaked in nebulosity.

This is M44, from Astropix.com 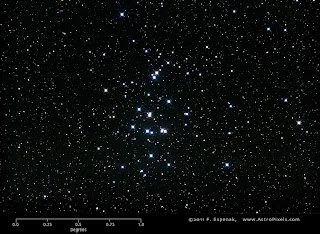 I had other targets, like Messier 67 also in Cancer by the head of Hydra, and a look for Messier 53 globular cluster in Coma, but the sky was suddenly bright streetlight orange with clouds. Pah!

Playtimee over, I had to head for bed.
Posted by Simon Douglas Thompson at 14:25