I was out running today, Hawton, Farndon then home route. I hadn't seen much of interest, apart from nearly running over a female pheasant, until I found myself on the power station reach of the river, where I spotted one of these fellows. 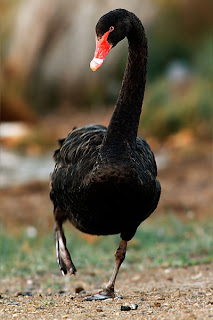 An Australian black swan. They are not native to this country  but as with many other species they have escaped from ornamental parks or public farms. There are no reports of them breeding in this country, apparently in 2003-4 there were 43 of them living wild in the UK. The chap I saw was hanging out with a flock of native mute swans, which have decided at last to take to the river instead of eating all the farmr's crops, and my eyes nearly fell out when I saw it. It's not an amazing bird to see, twitching wise, but it's a good spot for a very amateut birdwatcher like me.

Posted by Simon Douglas Thompson at 05:49