I was awake early, the sky was blue through the curtains, all augured well for the sort of really early run I'm always promising to do on every off-shift I have.

Alas at 7am I got distracted by watching "The Life Acquatic with Steve Zissou" - and so it ended up being nearer 930 when I did my stretches and ventured out into a beautiful day marred by a bitter wind.

I ran out along Barnby Lane, and up into Coddington the back way. No kestrel by the A1 flyover, but the hedgerows were dotted with the usual yellowhammers, chaffinches and great tits. I wonder when the first house martins and swallows will decorate the power lines, and slice the sky up with the joy of their flying?

Decided to run through Beacon Hill reserve, and although no brambling erupted from the scrubby ground cover, I could see a buzzard far off in the distance being mobbed by crows. "Nice sight" I thought. "Bit far away though". But then, as I began to descend the muddy path towards the nursery, my eyes were alerted to the sight of a buzzard having evidently just launched from the belt of trees that marks the edge of the farmland, and struggling to find a thermal. I though it was being mobbed by crows as well, then it transpired there were two other buzzards slowly circling and flapping, looking for something to soar on.

Then suddenly, the sun warmed slope combined with the biting Nor'easterly wind gave them the lift they were looking for, and beautifully, effortlessly, they began to rise.

They were right over my head, and I had superb view, their tails steering them in the air flow, white wing markings prominent in the sun. And I took off my radio 4 blaring ear phones, and listened asnd you could hear them keening, as I remember from eerie dawns at an exes home in the welsh valleys. One bird ws much larger than the other two, whether this was sexual dimorphism or an older bird, I do not know. What I do know is that it wasnt as good a flyer as one of the smaller birds, which at one point gained a hundred feet as if it were in a lift without so much as twitching its wings. I watched them for ten minutes until they slowly moved off towards the industrial estate, utterly engrossed.

And to think folk want to put these birds in cages while they destroy their nests and eggs, or shoot them, or poison them. Ugh.

From Aviceda on wikimedia, this is exactly the view I had today. 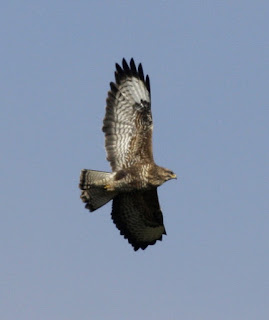 Posted by Simon Douglas Thompson at 04:35