How to Observe the Perseid Meteor Shower

Some of you may have noticed the increasing coverage of the upcoming Perseid meteor shower on the night of 11/12th August - Sunday into Monday. I'm going to give you a few tips on how best to get outside and see a few meteors.

The good news is twofold. 1) Meteor activity is already increasing; if you were to head outside tonight under clear skies and watch for a few minutes, you would be unlucky not to see one. 2) The best time to see them is after the pub closes. Probably in every sense.

The Perseid meteors are grains of dust, smaller than a grain of sand, that were once a part of Comet Swift-Tuttle, a comet with a nucleus 27km acrosss the orbits the Earth every 133 years leaving behind a trail of iccey and dusty particles. Every August 12th, our home planet intersects the centre of the orbit of these particles, each one the age of the solar system, and they slam into our atmosphere at high speed, leaving a fast moving, bright trail as friction causes them to burn up.

Meteor showers appear to emanate from a single spot in the sky called a radiant - the Perseids radiant is in the constellation of Perseus, the ancient Medusa slaying warrior. This diagram from Sky and Telescope magazine explains it. 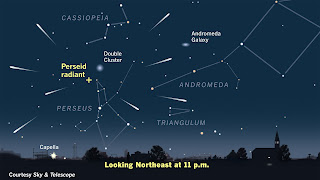 As the radiant rises higher in the sky, the chance of seeing meteors increases, so the best time for observing Perseids will be after midnight as the 11th of August turns into the 12th, Sunday to Monday. My plan will be get a reclining garden chair out and face it roughly East, or North East, and lie back looking in the rough direction of the prominent W shaped constellation of Cassiopeia and above. I shall have a drink of some variety, a warm jacket on, and be listening to some spacey stories on my mobile phone.

The meteors will be fast moving, mainly white "shooting stars", similar brightness to the brighter stars, brighter ones possibly leaving a smoky trail. Look out for any leaving a different coloured trail, possibly yellow or blue-ish, and for really bright fireballs that will perhaps glow pink or green and leave a trail of sparks.

Don't be confused with the International Space Station, that will be brighter than most of the meteors, and be much slower moving from West to East if one of its passes occurs while you are observing.

The shower will continue until dawn, with the numbers of meteors rising as the radiant does. Under clear skies, perhaps up to 50-60 an hour may be visible, but from a town sight, 25-30 might be a good return.

This is a fascinating even that anyone can take part in, for free. Give your kids a treat and let the stay up and watch if skies are clear. And remember, Perseids will be visible for a few days either side of the early morning of the 12th.

Posted by Simon Douglas Thompson at 13:36